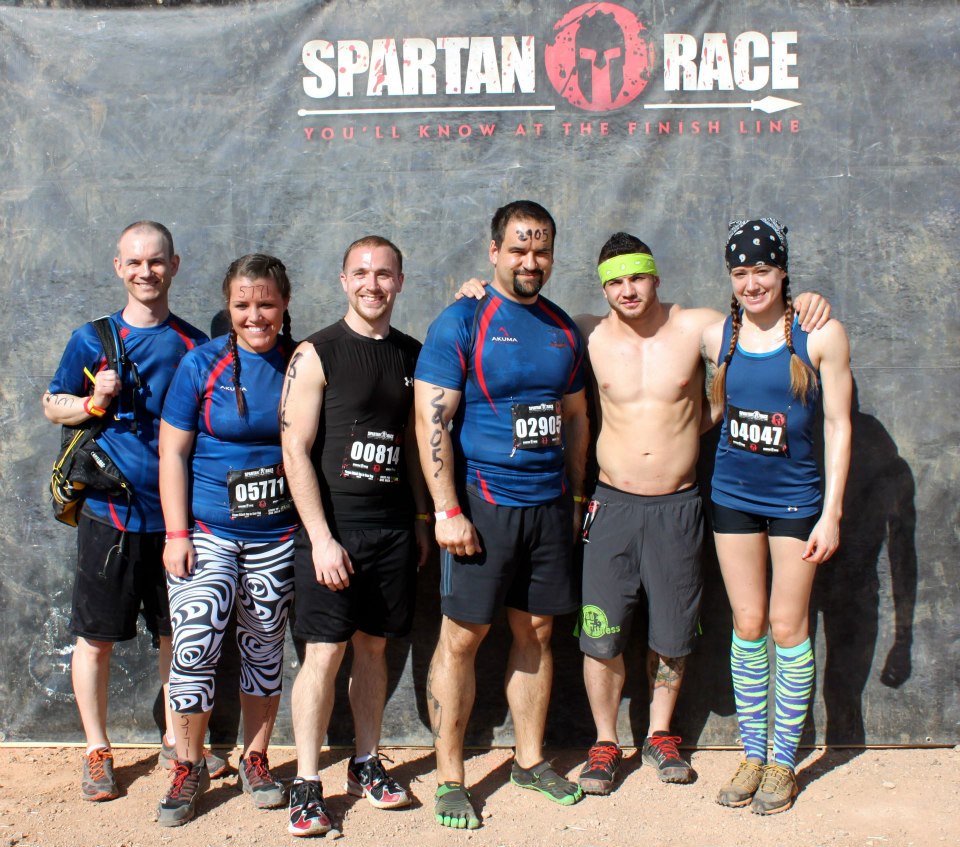 I could barely sleep a wink. It was 4:30 am and all I could think about is that course, what it’s going to look like, what obstacles are going to be out there, how hot will it be outside… my mind was racing. I had tossed and turned all night, waking up every hour or two. The biggest thing on my mind was my foot.

Side story for those of you that don’t know: I started doing OCRs last year. I completed the Amesbury Sprint and the VT Beast. I was scheduled to run HH and a regular heat with NE Spahtens for the Super in IL in late October, however I got the news in early October that I fractured my right foot. Devastated was an understatement. Not only had I put my body through hell at that Beast, but also I wanted that damn Trifecta and I wanted to run in the HH. I was also gearing up for a marathon that I had been training for that was 2 weeks after I got the news. Long story short—I was in a non-weight bearing cast for a little over a month, followed by a non-weight bearing boot for another month, then on crutches in the boot for a 3rd month. My race season was over and the likelihood of healing without surgery was unknown. It was the longest fall/winter of my life, seeing all my friends running some really fun races. I had some great support and motivation from my team and I truly appreciate everything they did and continue to do! I digress…

Back to Vegas—So I decide to get up at 4:30 and wait until my hotel roommates get up. Another short digression here—I just want to say that Spartan races really bring people together! I roomed with 2 West Coast ladies, Danielle from Seattle, and Raelene from AZ. We had never met before this trip; we found each other on the Chicked page. Amazing girls, amazing trip.
As we pull up to Lake Las Vegas, the signage was lacking, but it was easy enough to just follow the other cars and hope they were just as out of their minds as us. My nerves started to kick back in as we drove up the hill to the parking lot and could hear the bass from the festival that was over a mile away. Being that this race was in the desert, you had a perfect view of many of the obstacles among the red, dusty terrain.

Danielle took off at 8:15 with the Elite women, and Raelene and I just waited around for a few other NE Spahtens to show up. It felt like hours were going by. I was anxious to get on that course, second-guessing if I am ready, psyching myself out, etc. I finally caught up with my fellow NE Spahtens and we were ready for the 9:30am heat.

As we line up, I am looking around at the other racers. This is what I love about Spartan Race. It draws such a diverse crowd of people, who are there for various reasons. So many inspiring people, and they probably don’t even realize it! TC (as I have learned he called) belts out the usual pre-race sermon that starts getting us amped up. Who am I? I am Spartan! Aroo Aroo Aroo! And we are off. The team gets split up and I am okay with it. My fellow NE Spahtens are great racers who want to finish under a certain time, so I respect them for that. I know I have their support, as I journey through this 8.6 mile course without them.

Since my foot is still healing, Raelene and I take it nice and easy, jogging our way up the first hill. The view is gorgeous, but the desert terrain is difficult to run in, especially if you are used to the cold winters and humid summers in the northeast. Racing in this environment is like nothing I have ever done before, but it was just another obstacle to overcome. Having a pack on definitely helped, but they had several water stations along the way as well.

As we were running for probably a good half-mile or so, we finally made our way to the first of 20+ obstacles. We made our way to the first obstacle, which was the moats. Pretty straight forward—jump over or climb through the little muddy trench. I won’t review every single obstacle, but here is a spectator map (yes the spectator map), with most of the obstacles listed. There is a small spot where some are covered, but you get the gist. 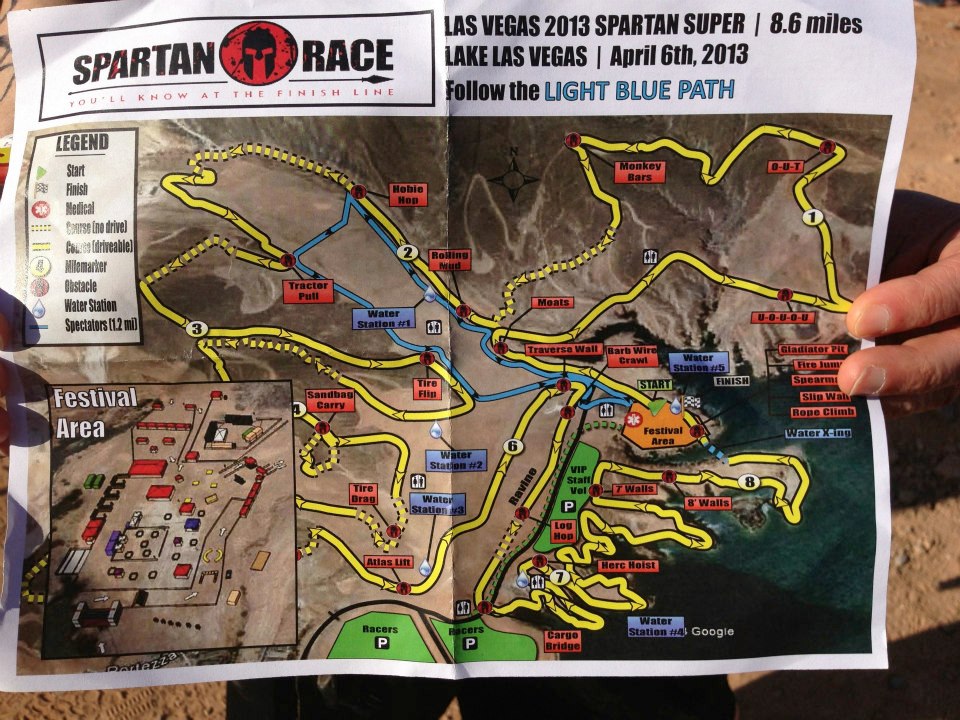 I am assuming this spectator thing is relatively new and will obviously only be possible for more open venue races, but they had a spectator map and path. So at pretty much every obstacle there were people cheering and waiting for loved their ones to come through. I have mixed feeling about this. One the one hand, I am glad that spectators get to actually see things now. On the other hand, it is a bit distracting. We will have to see how it goes at future races.
I do want to reflect on a few memorable obstacles for me. First, the tire drag was a new one for me. I always love a good tire flip, but the tire drag was a whole new beast. The tire was attached to a long rope, which was attached to a stake in the ground. The objective was to drag the tire away from the stake for the entire length of the rope, and then drag it back. The catch was that you could not pick up the tire; you had to use the rope to pull it. They were allowing people to tag team, but they just had to do it twice. I loved this obstacle; it was tough, but felt good to get it done without help!

The sand bucket carry was intense. You had to fill a cement bucket with sand, dirt, rocks, or whatever was around on the ground. Then you had to carry it (weighing around 50lbs I would say) over these sand hills and along this narrow path. Racers were scattered atop the little hills and in the way of the path, trying to re-fill their bucket without the volunteers noticing they had spilled any. Others were just trying to catch their breath before starting again. The rough terrain/uneven path coupled with the extremely heavy and hard-to-grip bucket, made this short distance feel like eternity. I managed to do it without dropping any sand and only stopping to readjust my grip once. The other difficult part was that you could not pass people easily, so it was single file. I am proud at how I did, but I could not wait for that obstacle to be over. This is where gloves would come in handy.
The barbed wire crawl was fun as usual. Despite being in the desert, it was extremely wet and muddy. It was too full at some points and you could basically swim, with the muddy water up to your neck. The wire was up higher than usual as well, because some people could practically crawl under it without getting low to the ground. I came out of there completely covered in mud; luckily there was a small little pond people were cleaning off in. Not that I mind being muddy, but in this weather the mud sticks immediately, so it felt as though I was wearing a layer of mud as my skin for the entire race.
After 8 miles, we were finally in the home stretch. We were at the last set of walls, with only a handful of obstacles left. There was a swim across the lake (which at that point felt AMAZING), the rope climb, slippery wall (which seemed much steeper than I remember?!), Spear Throw, Fire jump, gladiators, done!

I finished in just under 4 hours and 14 minutes. Not the greatest time, but I am okay with it. Having done a sprint in 2 hours and a beast in 9 hours, my hope was to finish in around 4 hours (and not injure myself again) so I am happy! My foot was bothering me for a good portion of the race; so slow jogging was much easier. That being said, I know where I am at, I know what I need to improve upon and I am going to do better next time!

This was a great race overall, and if I can afford it, I will definitely do it next year! This new Reebok partnership brought about some interesting changes that had not been there in 2012. With all the changes and drama going on in the OCR world, I am sure Spartan Race will do what is best for the integrity of their races. I look forward to what the rest of this race season has in store—next stop Colorado for a fun filled weekend of volunteering and racing the Military Sprint!
Katie Webber