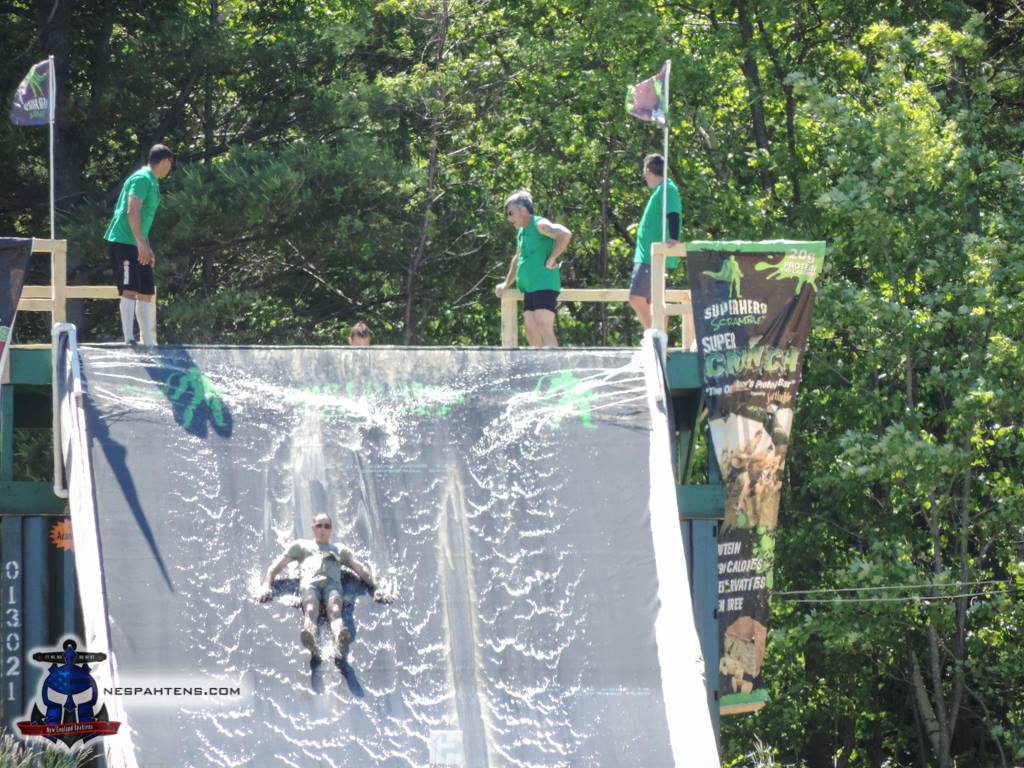 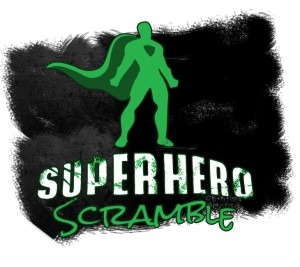 Superhero Scramble returned to Amesbury Sports Park for their second time – and in the weeks leading up to the event, I was a little nervous and reserved.

2013 wasn’t a great year for SHS. Several events were rained out, the Amesbury event included. Hit hard by the weather, and a particularly poor choice of setup for the Super Slide meant that while we enjoyed our day, we will always remember that damn slide, the large delays in getting waves out and obstacles that were missing.

They made up for all that this weekend.

Pre-race communications were a little slow. I don’t think we got our bib numbers and race day waivers until Friday, but they did arrive and did have the pertinent info in them. Amesbury Sports Park is a venue we all know and love of course – easy to find, incredibly accommodating and professional – it’s a smart choice for traveling races, as much of the heavy lifting is done for them already.

Arriving on race day, the registration tents were right by the shuttle bus drop off and easy to find – oddly (and mentioned by many others), they simply handed you your race day stuff individually, rather than a packet or envelope – it was a bit tricky juggling our gear, bibs, pins, timing chip and two wrist bands, when a simple envelope would have kept everything together. A small pedestrian bridge brought you over the course and into the main festival area.

Bag check was available, and seemed well staffed until the end. I didn’t have to use it, so I didn’t pay too much attention.
The Schwag tent was well stocked – I didn’t browse the gear, but did appreciate that we could pick up our finishers shirts early and stuff them in our bags, meaning one less muddy thing to deal with! The shirt is a nice design and feel, but doesn’t fit me (despite getting my normal size) – ho hum.
As biggest team, we had two 10*10’s on the grounds for shade – which was essential with the temps getting well into the upper 80’s and no natural shade on offer.
Superhero Scramble brought both the start and finish lines right into the festival area, which made for some fantastic spectating! The final Beast wall was right in the middle of the festival, and next to the biggest team tent – so having something to watch and interact with was fantastic, and we ended up helping SHS with people on the wall much of the afternoon!
The start line had it’s own 6′ wall to hop, and was easy to find and see.
On the opposite side of the finish line, a stage and band/DJs were playing music at perfect “not drowning out conversation” levels, a tent for people eating was setup, good local beer (Harpoon!) running their own contests (but not selling their steins – BOO!), and typical Amesbury Sports Park food vending.

It never felt crowded, which was a bonus – but people did have problems finding the wash off and changing area’s, which I believe were on the opposite side of the staff parking lot – this is something I’ve heard before at the venue, and could probably do with clearer marking. 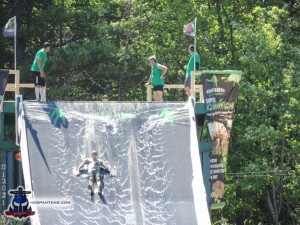 Superhero Scramble knocked this one out of the park. From a couple of switchbacks on the tubing slopes right out of the gate to thin the pack, to keeping their obstacles out of the trails (beyond a few easy things, like tire steps and wire to navigate) – I never felt like the single track trails were crowded – and when we did break out of them onto the open fields, there were two or three or more big obstacles to navigate before heading back in for some running.

And those big obstacles were well done. From clones of obstacles people know at Tough Mudder (leap of faith and artic enema) to Spartan Race (rope climb / cargo net and several barbed wire crawls) to staples of the OCR industry (big walls, small walls, over under through walls) – there were some that were easy, some tire steps or trenches to duck under – and some where physically tough, like Superhero Scramble’s unique climbing walls. One point on the course we hit the Sports Parks sand pit, and had a pretty typical breeze block drag and sandbag carry, and it reminded me how spoiled we’ve been with Wreck Bags at recent races – the sandbags were already falling apart and super light – definitely not much challenge there. Of course, when you also have ring swings and tarzan rope swings – there were plenty of tough obstacles to go around.

Superhero Scramble also do something unique with many obstacles having two options – one easier, one tougher. Inverted walls and the climbing walls, knotted ropes and straight ropes, regular big walls and walls with steps – and others providing the newer runner with a way through the course that still let them accomplish the obstacle, but without the danger and fear factor of the harder side. I think this is a fantastic approach to giving an introduction to OCR for new runners.

The slide was done right! Last years slide was a terrible choice on the part of SHS – and we knew they wouldn’t try it again – but it was great to see that they did bring their traditional super slide in, and put it right at the top of the ski slope! Due to space, the slide wasn’t as big as it’s been at other events, but it was considerably better than the 2013 effort 🙂 Well done, SHS!

Superhero Scramble have a solid event crew, and put on fantastic courses. We loved their use of the terrain and the obstacle build. Knowing they had an overlap with Warrior Dash from the previous weekend, it was double impressive that they were able to make use of some things left behind by WD, but change them up enough that they were worthy of the much more challenging SHS course.

However, it’s not all peaches and cream. They left their volunteers hanging, again. This happened last year too – with volunteers being stuck out on the course considerably longer than they signed up for (in some cases with no hydration, nutrition or shade, as they weren’t expecting to be there that long) – and they only just made the volunteer wave. This is a pretty common problem for traveling events who have little to no “base” they can use when they come to a new region, but it’s an important point to note if you do chose the volunteer route.

In other regions, SHS continue to struggle to get a foot hold. Events with less than 1000 finishes, cancelled and rescheduled / relocated events (in some cases, multiple times) – we’re fortunate in New England that Superhero Scramble has a good date, with a solid venue – and after this weekends race they helped boost their reputation as a really fun time that provided enough of a challenge to go back to every year.

A week ago, I wouldn’t have pre-registered for 2015. After this weekends race, I did. But I did pay Active the extra $7 for race insurance, just in case.