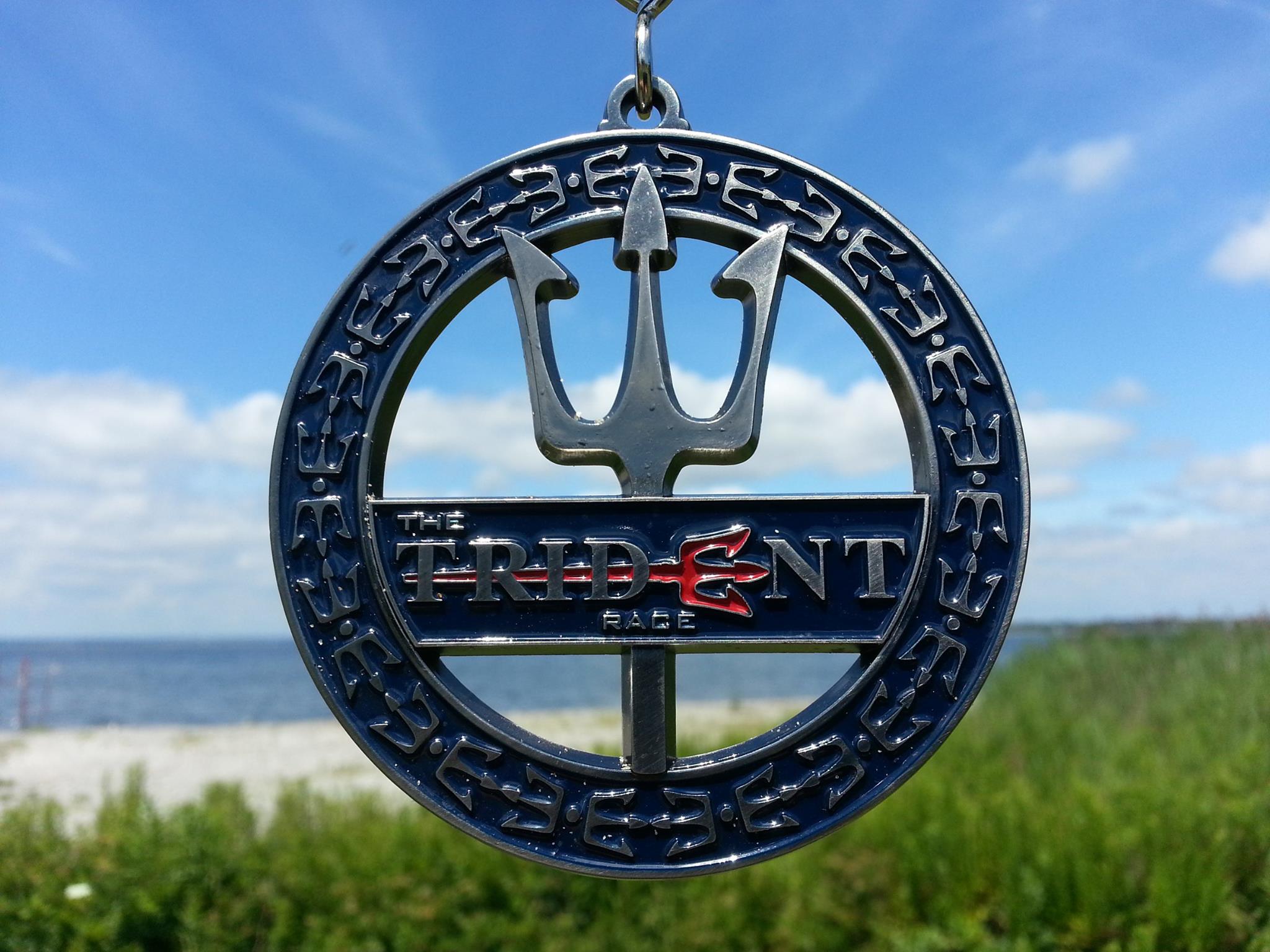 Not every race goes according to plan. Sometimes, it’s a problem with venue, weather or other uncontrollable situation. Sometimes, it’s simply inexperience with hosting OCR’s, event planning or the myriad of other things that can trip you up when runners start to arrive for your event, and you’re still trying to build walls, or lay out flags, or track down vendors. Sometimes, shit just hits the fan.

The Trident Race certainly ran into problems this past weekend – but also had some promising highlights. Stephen Mello, SGX Coach and seasoned OCR athlete attended for us and fills us in on how the day went for him. 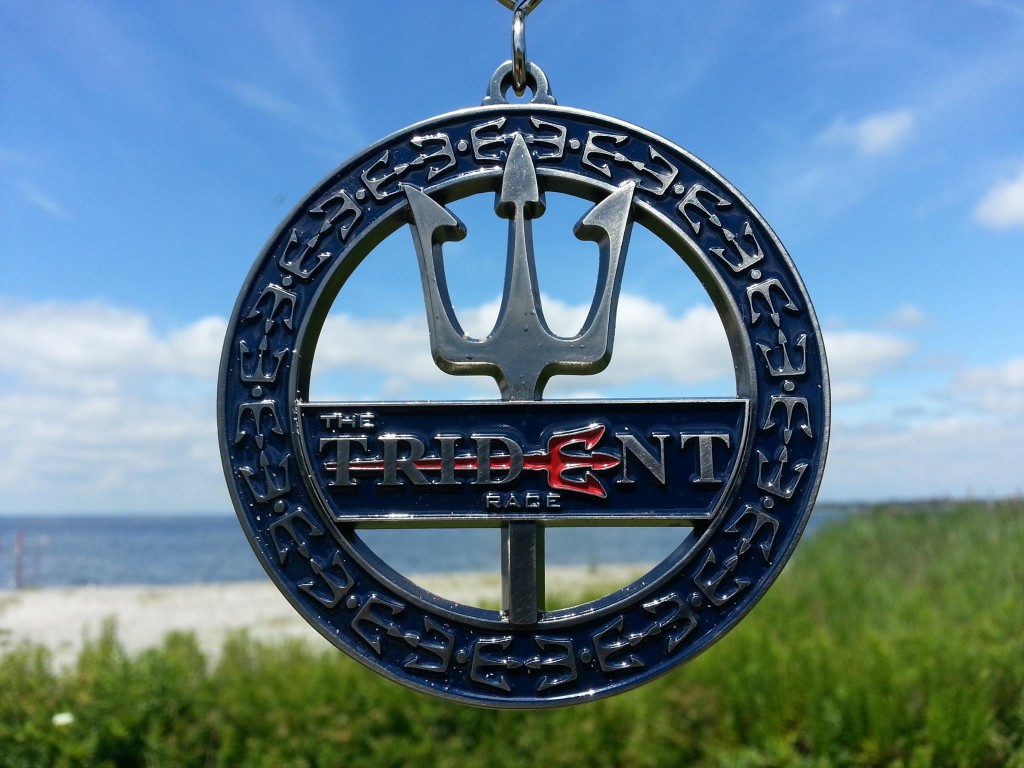 Trident Race is a brand new race in the crowded OCR scene, coming out early in the year with a slick website and lots of high-quality marketing. They advertised their race as 3.5-4 miles, with 20+ obstacles, at the beautiful Colt State Park in Bristol, RI. The date they chose put them up against the national brand Battlefrog, tough competition for a first-time race. 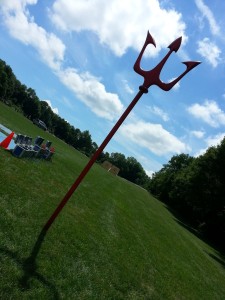 My plan was to run in the Elite wave, and then at least once again in an Open wave so I could get the experience from both sides. I’m glad I did, since there was a clear difference between the two. Elites were to start at 8am, and were told to be there an hour before to register. I arrived at the venue around 7am, and saw zero signs and zero volunteers to tell me where to park. I spent 15 minutes driving through the entire park before getting back to the entrance where there was finally a volunteer to tell me where to go. We parked in a large field about a two minute walk from registration, and it was free so that’s a plus.

The parking situation, though, was a sign of things to come. While walking to registration I could find no starting line, and even with my unintended tour of the park had only seen one obstacle: a pair of walls near the festival area. Registration was quick and easy, as was picking up my shirt and the free bag check. All day long the volunteers were helpful and nice. I had a question on running multiple laps, and volunteers quickly found me the guy that could answer it. Just $10 for an extra timed lap, similar to most Race Local events. Another thing to note was that there was only three port-a-potties available for what ended up being about 500 racers. I overheard a few volunteers and staff talking, and from what they were saying, the park authorities were either not willing or not able to open up their bathrooms. While this didn’t affect me since it was slow that early in the morning, there was a really long line for the port-a-potties by the time I had finished my first lap. 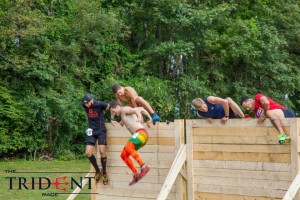 After finishing my warmup I headed to the start line (which had been put up shortly before) at around 7:50. There was no staff around, and the timing company was still setting up the finish line. Sometime soon after 8:00 the festival emcee was finally done setting up, and announced that the first wave would be starting in about 30 minutes…. What?? Back to warming up I went. About 20 minutes after we were supposed to begin the starting line emcee, a very nice lady, was doing her best to calm the racers and find out when they would be ready to start. She said they were trying to get a hold of the Race Director, but shortly after announced they couldn’t reach him. One of the employees of New England Timing Company then had a short conversation with her, and it was decided between them that the Elite wave could start at 8:45 if they hadn’t heard from the RD. Quite the bad look for Trident Race there. Another executive decision made by the start line emcee was to stagger the waves, something needed since there were two 7 foot walls about 200 feet from the starting line, aka a major bottleneck right at the beginning. It was a smart tactic she kept going throughout the day. Another sign of bad planning, though. 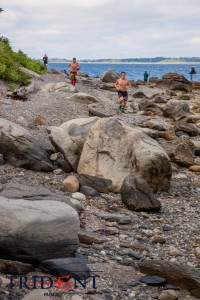 We went off at 8:45, over the two walls followed directly by a low crawl. From here we took a right, crossed a street and were off for a long stretch of running. Some general notes on the course: the Elite wave is the wave that relies most on course markings and volunteers for directions. With no other racers on course to follow and running at maximum exertion, its easy to get lost with no direction. Which is exactly what happened to me and those around me several times. The only markings were small, hard-to see signs, and those were used sparingly, as were the volunteers. It seemed like a mistake a first time race would make, or that they hadn’t had someone do a trial run of the course beforehand. Signs were there in places where it was obvious where to go, but missing at the tricky spots. They were also sometimes angled so it was hard to see from the route, and signs from the route back only added to the confusion. In the Elite wave there also seemed to be less volunteers, and they were also not always put in the best spots to help direct racers. Many in the Elite wave, already agitated at the late start, were now really upset as they continued to have to slow down, stop, or backtrack to stay on course.

On their Facebook page they had posted in response to a question that the course would have minimal asphalt, though unfortunately for me it ended being mostly asphalt. Not a big deal, but I wouldn’t have chosen my Icebugs if I had known. 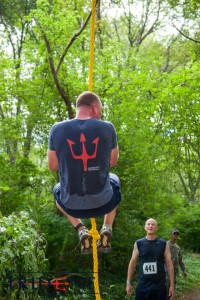 The scenery of the venue was awesome, the park was well cared for and the use of the wooded trails and beach running was great. It also felt really good to relax in the ocean when I was done. One negative with using a state park was that it was packed with park goers on the paths and cars on the same streets on which we were running. They had advertised ahead of time 20+ obstacles, but ended up with less than 15. There was the walls, the low crawl, a log carry, rock carry, rope climb, bucket carry, wreck bag carry, hay bale carry, a short slide, picnic tables to jump over, another set of walls and a short swim. Not many obstacles, especially as the course was right around four miles, and there weren’t any real challenging ones. Too many of them were also some kind of heavy carry. Some of the advertised obstacles were also missing, such as a 100 foot slide into a pond and anchor drags. A day or so after the race, the RD posted on Facebook that the park had forced them to remove some obstacles just two days before the event.

As nice of a venue Colt State Park was, perhaps its just not a good fit for holding OCRs. Use of volunteers from the armed services was a nice touch, with some of them making us do lunges in the later waves. There was also a drone on course taking video and pictures, and photographers on cars that followed the racers, so I can’t wait to see what kind of shots they got. After crossing the finish line, I was asked several times how I enjoyed the race, what my favorite things were and how things could be improved. They really seemed to care that we had a good experience. Though I heard many grumblings from racers in the first wave, the later waves seemed to give nothing but positive feedback. 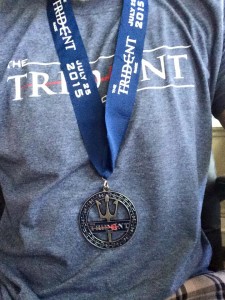 Perhaps the best part of the race was the swag. The finisher’s medal was large, well made, with a cool trident design and a dated custom lanyard. The free shirt was high quality, and inside the racer packet was a large Trident Race sticker and wrist band.

After my first lap I rested a bit, and then got a second timing chip from registration. The volunteer/staffer there let me take it for no charge as she couldn’t get signed in to the card swipe app on her phone. The next wave I jumped in started on time, and as far as I could tell only the first and maybe second wave of the day started late. With more people on course, and having already done it, it was easy to know where to go this time. There also seemed to be more volunteers, or they had just moved themselves into better positions. Two of the three main problems (late, lack of direction, obstacles) were worked out relatively quickly, so credit to them. I made it out onto course for one more lap, with a similar experience to my second with perhaps a bit more pedestrian and car traffic to look out for.

The festival area was definitely a highlight, as there was a hot air balloon to ride, a lobster and clam boil, lots of vendors, a beach volleyball court, and of course the beach and ocean to enjoy. The after party was at a nearby bar, which I wonder if is because of restrictions of the park. There was also a fun looking kids race that had at least two large inflatable obstacles, tires to crawl over, small walls, and a low crawl, among others. 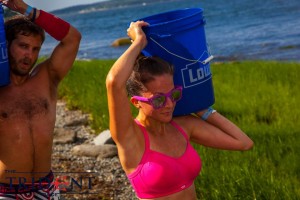 Overall I’d say this is a race with some potential, but also some risk. They seemed heavy on the show, but lacked some important substance. Their marketing and advertising was top notch, as seen by a good turnout of about 500 people despite being new and on the same day as Battlefrog. The use of drones, and hot air balloon was awesome, the swag was some of the best, the venue was beautiful, getting more than 3 miles is always nice, and the staff and volunteers were friendly and helpful. However, they fell short on some of the most important things about OCRs and races in general. Starting 45 minutes late, leaving important decisions up to those who shouldn’t have to make them; lack of clear directions on course; and an amount of obstacles well below what they advertised, most of which were easy even for beginners.

These are issues which can be fixed, and hopefully next year they will be able to build upon this start.