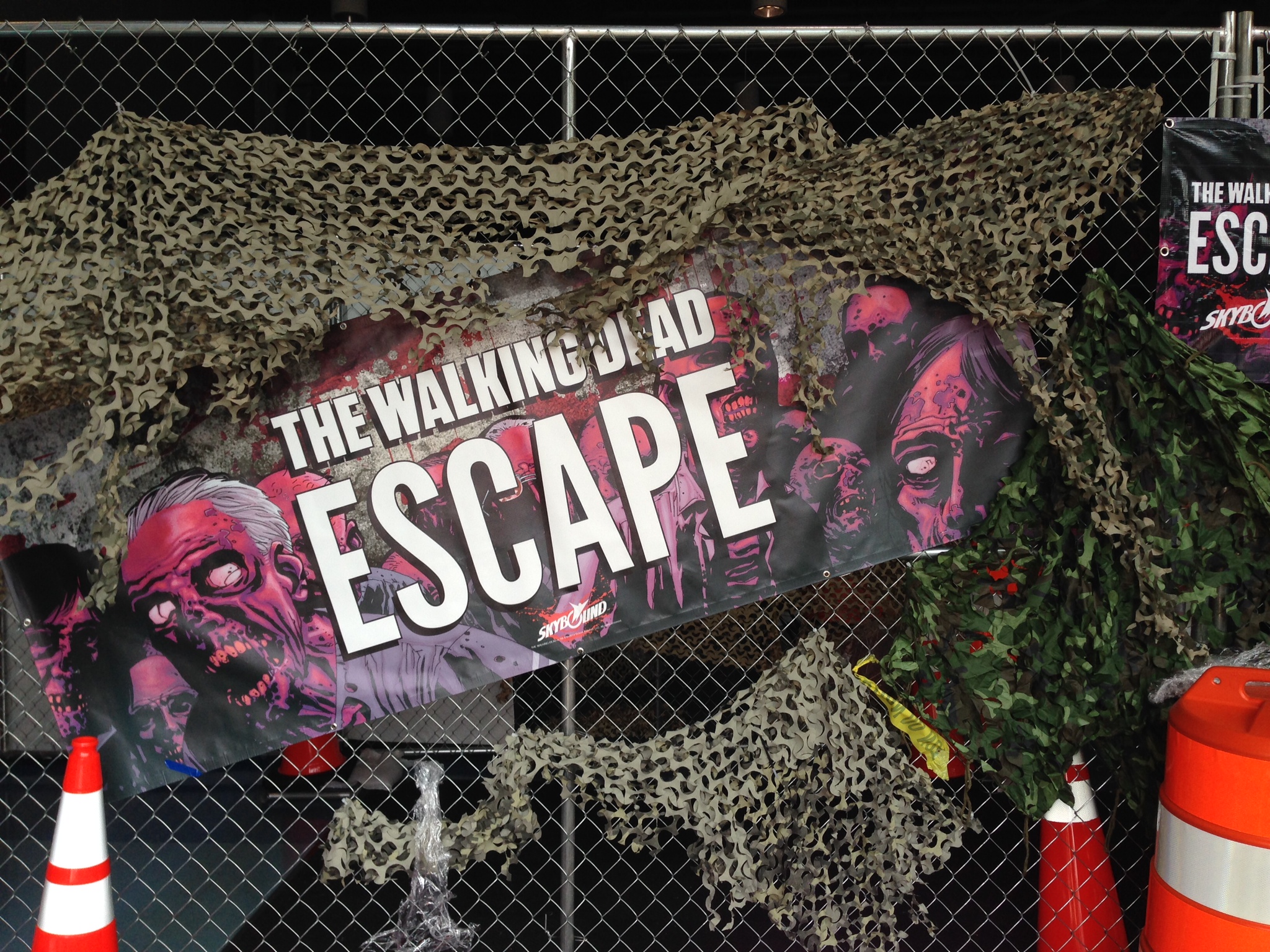 Editors note: The Walking Dead Experience hit our radar because at one point, the Ruckus team was involved in it’s production, and it had an element of obstacle racing in it – maybe not a full on race event, but there was overlap, and Zombies are always popular. They invited us along for their CT event, held the night of the CT Spartan Sprint to check things out. Going in, we knew it wasn’t going to be a race, and we knew it would be much more about a zombie experience than obstacles. 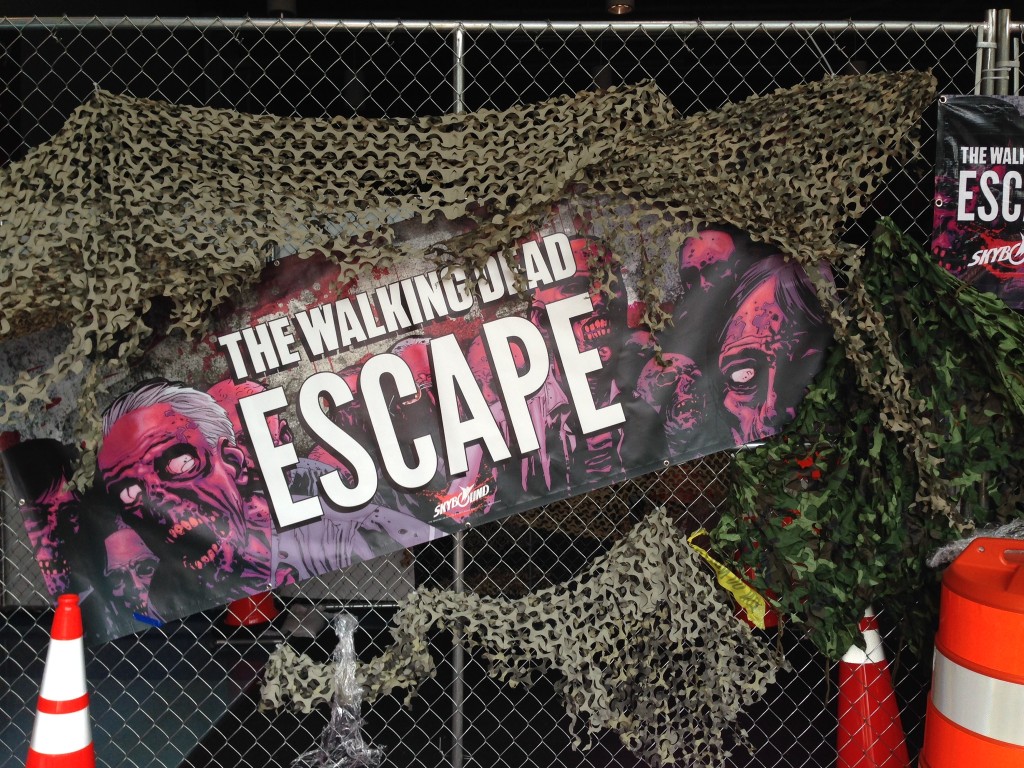 Location: XFINITY Theatre, Hartford, Ct
The XFINITY Theater is a concert venue with an amphitheater style set up. 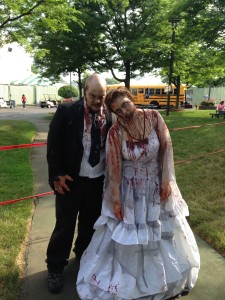 Check in: Very easy – every attendee passed through security for a “wand sweep” and bag check, then proceeded to the appropriate check-in, walker or racer. Attendees were given identification badges on a lanyard identifying their role in the festivities – this was a neat idea and added to the “element” of the experience.

Bag Check: None – though for this event there was not really a need since there was no mud or requirement for “race wear” shoes, clothing, etc.

Wash Station: None – there was no need – however if you needed to wash anything the restrooms were more than sufficient.

Changing station: No specific area – though bathrooms were available and would serve this purpose well.

Bathrooms: Onsite in the lobby area of the XFINITY Theater – more than sufficient.

Vendors: There was a unique approach to vendors – since this was a The Walking Dead sponsored event there were not any outside vendors promoting products – however the “festival area” was well coordinated with themed activities revolving around the Walking Dead show – more on that later.

Schwag: Other than the role identifying name badge, there was no specific schwag for attendees. All attendees had the option to pay extra for a VIP area which included The Walking Dead promo material such as comic books. I did not have access to the free schwag.

Pre/Post race nutrition: There was no complimentary drink/nutrition supplied before or after the race.

Beer: No beer was supplied as part of the entry. However, there were beer/alcohol and food/drink vendors – this was provided by the XFINITY Theater and appeared the venue’s normal food service.

Volunteers: There were plenty of volunteer and actors on the course – everyone was very engaged in the race “Experience” and appeared to be very engaged and did not break character – that was the most intriguing and cool part about this race experience – it really encompassed The Walking Dead show and offered participants insight into the post-apocalyptic world filled with zombies from beginning to end – clearly if you were a fan of the show this did not disappoint!

Distance: I GPS’d this course and came up with 1.05 miles

Terrain: The course took place in and around the XFINITY Theater – the RD used the amphitheater terrain including the flat surfaces, stairs and the hill used for audience seating – given that this was a “experience” vs a “obstacle course” I thought it was well set up and utilized

Course marking: The course was well marked and it was always clear where to go – unique to this experience were the volunteers that were actors in the experience – they kept racers on track, provided some dramatic acting and ensure that fun was had by all – for me this was impressive and they MADE the experience. I am not sure if they got a free run for their efforts, but easily without them the experience would have failed. 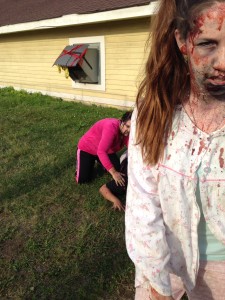 Difficulty: From an OCR difficulty perspective this does not fall on the radar – there were 0 obstacles. From a non-racer who came for an experience, I would rate this above average for difficulty – this was based on my post-race interviews with participants – many were not physically ready to run between “scenes” of the experience, run up stairs, etc. Many were very pleased with the course and even commented they were glad it was not longer – they were wore out.

Obstacles: There were none. This was surprising to me – after reviewing the website and sharing with New England Spahtens to gauge interest I was convinced that this was a Walking Dead experience in which I should “Be prepared to climb, crawl, and slide. The Evacuation Route will feature multiple obstacles to go over, under and around.” The promo video even showed participants engaged in obstacle challenges. I think that this was a bit misleading and a bit disappointing – there was not much of any of this and certainly nothing that resembled obstacles except for one section where, if you wanted, you could climb over a series of cars. Perhaps it is more accurate to call it, “the ultimate interactive fan experience.” – because that IS what it was – 100%

Overall Review: This event has been difficult for me to review – I went to the event as an avid obstacle course racer and someone who had NEVER seen The Walking Dead. I like zombies (they are fun), love acting, and love new experiences – I was not sure what to expect.
The Escape Websites greets you with:

“With the infection spreading and Walkers around every corner, a government evacuation center is your only hope. Or is it? Immerse yourself in the survival-driven world of The Walking Dead to climb, crawl, hide and slide your way through a series of gut-wrenching scenarios—in a team or as a lone survivor.

Your choices will determine whether you’ll clear quarantine or join the undead. For those who are already infected, professional Walker make-up from Greg Nicotero’s world famous KNB EFX will transform you into one of the undead, allowing you to terrify survivors in your path. 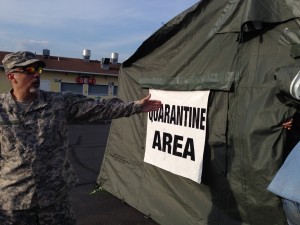 This is an excellent description of what the Experience was all about – from the time you entered the theater you were part of it all. If you were a survivor you where shuffled to a waiting area where you did not know what to expect. At your start time, an announcement was made and your experience began. The Governor of CT explained the dire situation at hand and asked you to remain calm – you were not infected yet.

Next you were shuttled to a military holding area were a military commander explained what was taking place, what the next steps were….. then…… ahhhghrhhrhghh in came the zombies and racers were off. I ran the course twice – everyone jumped and ran instinctively as the zombies rushed in – no one expected it – JOB WELL DONE.

For the next mile, you were escorted from scene to scene that you walked and ran to and through. Each scene had plenty on zombie and human actors, well dressed with professional make up. There were awesome props which really made the experience feel real. At times, yes, it was a little corny – but it was all in fun and everyone knew it. This reminded me of going to a Star Trek convention – to the outside world it was corny and funny and many would wonder the appeal. But if you are a Trekkie it is the place to be. The Walking Dead Escape was the same type of experience – if you know love the show – this was the ultimate way to spend your time – without a doubt. 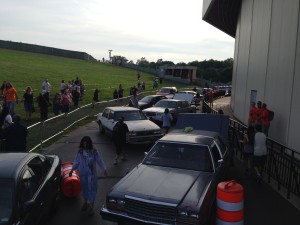 At the end of the race you were shuttle to a “sanitizing area” inside the theater which was located inside a military tent – “doctors” scanned you with lights and if you were not infected you passed through, if you were infected you, sadly, were put to your ultimate rest.

All participants ultimately finished into the festival area which was well put together – again, for non Walking Dead fans, it was an area with cool props, DJ’d music and some games. However, for fans of the show, I have to imagine it was mind blowing fun – a zombie themed DJ dance party with zombie props, zombies roaming the area – all in character and interactive. There were zombie themed games – dunk the zombie (water dunk style station) – Walking Dead Trivia for some cool prizes – and a VIP area for the ULTIMATE fans.

Overall, I was immersed in this experience and really enjoyed all that it had to offer. The production company did a very nice job and put on a solid event with no noticeable glitches – a pleasant surprise. From an OCR standpoint, this race is not one I can recommend given the cost. However, if you are fan of the show, I cannot see missing this event despite the cost.