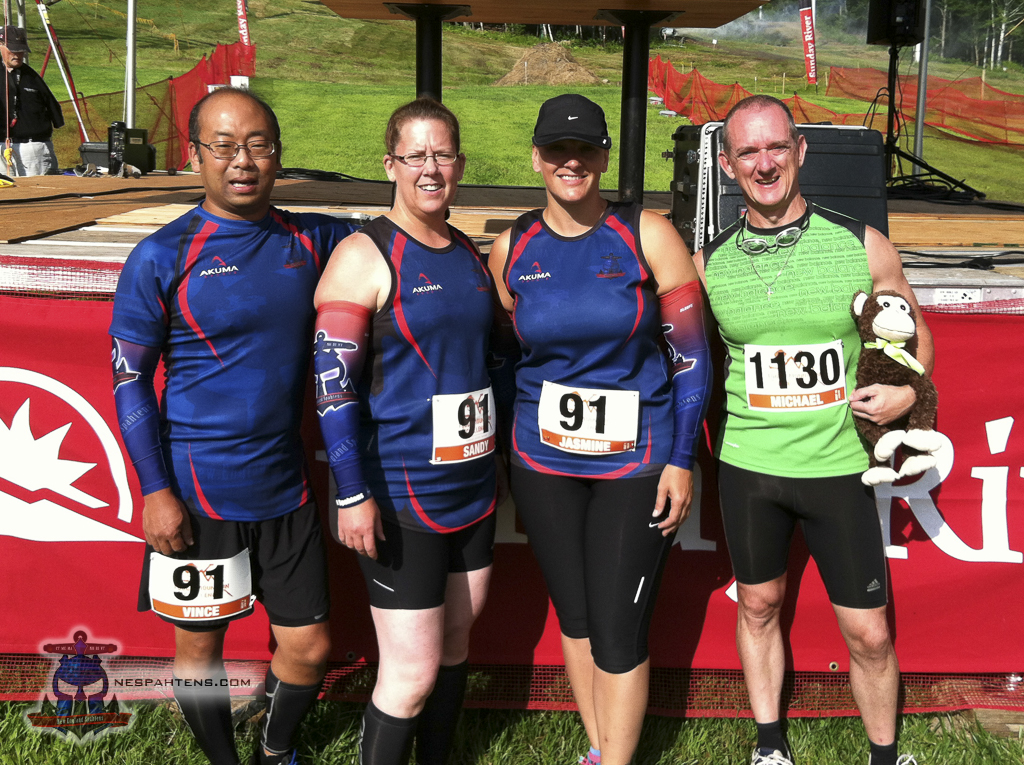 Saturday morning found a small but able group of Spahtens at Sunday River Ski Resort in Bethel, Maine for the Tough Mountain Challenge’s third annual running. To say this race has come a long way would be understating it by quite a bit. In their inaugural event in 2011, there were 674 official finishers. They must have loved the course because they returned and brought all their friends. There were 2,128 finishers in 2012. Rather than expand faster than they could control, TMC capped the 2013 race at 3,000 entrants and sold out well before the race date. The week running up to the event, their Facebook page was awash with “How can I get in?” posts as those who hadn’t registered early enough begged to be admitted. The event also attracted the attention of The Animal Planet’s North Woods Law game wardens. They ran in the 9:00 am heat with a video crew capturing their adventures. This will be featured on a future episode of the show, but we do not know the details yet of when.

TMC offered packet pick up on Friday evening from 6:00–9:00 and they held a dinner and party on Friday night as well. We did choose to pick up our packets early, but decided against the dinner and party. I feel comfortable in saying that if they were run as well as everything else for the event, then I’m sure both were great, but cannot say from firsthand experience. Anyone not wishing to pick up packets on Friday night had the normal check in available the morning of the race. Check in was organized by last name and went smoothly. At registration, we were given our personalized bibs (interestingly, all team members had the same bib number), a plastic mug, a beer wrist band, and the t-shirt that you ordered when registering for the event. They had separate shirts for men and women and they did allow people to try to switch sizes, but only after 2:30 pm on Saturday after everyone was assured to have gotten the size they ordered. No one in our group needed to take advantage of that option, but it was nice to know it was available for anyone who misjudged their size or the fit of the shirts.

We were scheduled to run in the first heat of the day at 9:00 am. We arrived at about 8:00 and had an easy time parking a few hundred yards from the entrance. Refreshingly, there was no fee for parking. Those who arrived later in the day were parked progressively farther away, but it didn’t appear that anyone had too far to walk. They had the option to let passengers off at the entrance before parking as well, so spectators were not required to walk long distances if they were not able. There was no bag check, but lockers and cubbies were available in the locker room areas if people wanted them. We were so close that we left all of our stuff in the car and had no need for more than cell phones to be held by our one spectator.

The festival area had upbeat music playing all day along with food vendors selling standard fare such as burgers, sausages, chips, and cookies. They sold beer in case your one free wasn’t enough and bottled water as well. There was no free water at the finish line which I didn’t like, but all the water was refrigerated and then kept on ice which I did.

About 10 minutes or so before the start of a heat, the emcee called for runners to enter into the starting pen area. Heats were kept to about 125 runners each which was very reasonable. Starting times were printed on each person’s bib, but no one was actually checking your time when you entered. Early heats are usually the ones that people jump into, but I did not notice that there were too many extra runners in our heat. It all went very smoothly with a bit of a pep talk followed by a countdown and then off!

The race began as you would expect any event at a ski resort to begin—uphill. They didn’t completely try to kill you right out of the gate, but it was a nice hill to spread things out a bit. The snow making machines were running full blast alternately from the left and right, making visibility interesting up a section of the first hill (Hurricane Alley). At the top two pipes acted as balance beams (Snow & Steady) before we headed right back down to where we started. Then, it was uphill again to the barbed wire crawl (The Shredder). As we approached, we noticed that everyone was going up along the far left and far right edges and so we headed straight for the middle—no need to wait while people moved in front of you! Of course, we quickly realized why everyone was at the sides. At the sides, there was actually enough room to maneuver under the barbed wire. In the middle, it was barely 8 or 9 inches above the ground. Rolling was impossible! We slid on our bellies and/or held the wires up to go under and emerged completely covered head to toe in mud and silt. Luckily, a water obstacle was next (Muddy Bobber). Wade across a pond and under pipes that were less than 2 inches above the surface of the water. You had no choice but to go under in all the muddy water, but it at least removed the silt that would have been like sandpaper otherwise. The water was also refreshingly cool. 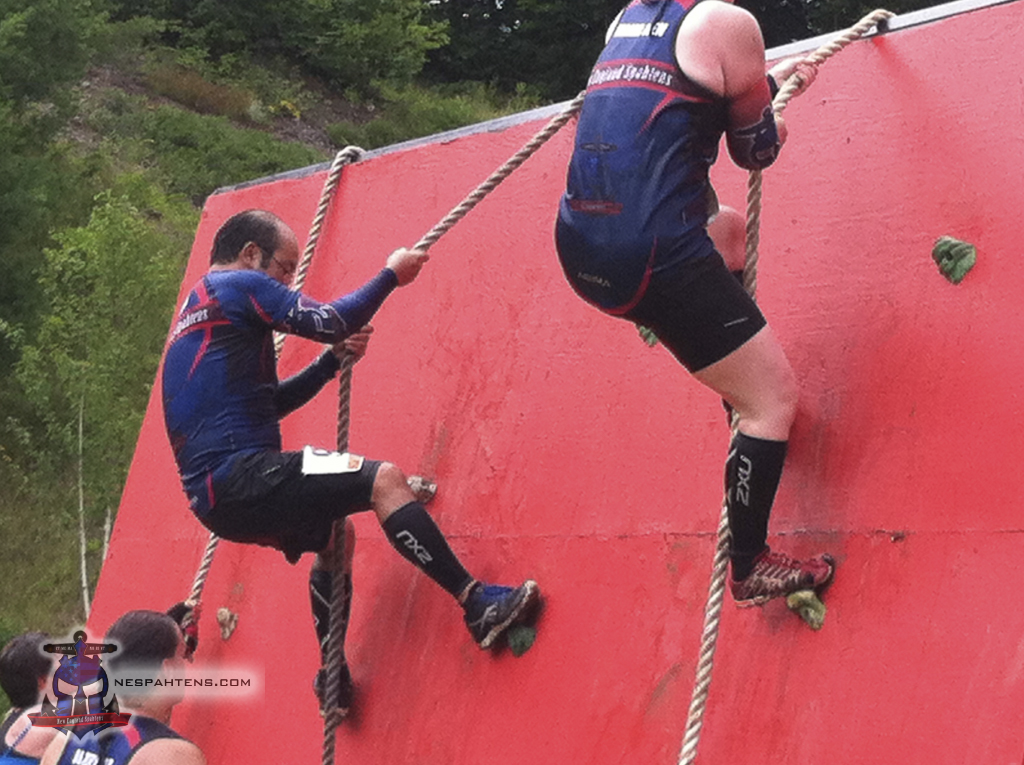 More hills, up and down, a great technical section through the woods (Walk In The Woods), a dark tunnel crawl (Black Hole), and then around a corner to what was likely the hardest obstacle for most: WTF. Yes, that is the name they’ve given the obstacle, and yes, that is exactly what you say when you see how very straight up and how very long the hill is. There are ropes at a few levels to assist your vertical assent and many needed to use them. Thankfully, a water stop was at the top as it was definitely needed. This was followed by a short run to the hills and trenches (Bust ‘n’ Burn). The trenches were narrow enough that you could try to jump them with the possibility of success, but you had to work at it. For someone who doesn’t like to jump into water with unknown depth, this was a nice change of pace.

And then came Buried Alive. As we approached a culvert running under a ski trail, loud pumping music could be heard. The top half of trash cans were used as entry points to a completely blacked out culvert. Once inside, there were flashing lights along with the thumping music and all we could think was that we were at a rave! This obstacle was my only negative experience the whole day. Because it was dark (and I do mean really pitch black other than the colored flashing lights), you had no idea what was in front of you. You crawled in on a short wooden platform and onto what felt like a rubber raft. Unfortunately, at the entry we chose, the raft had come loose and as the first person through, it tipped me forward and I did a faceplant onto the jagged rocks that I couldn’t see. I was lucky, with only a small cut near my ear, but it was scary for a moment. Luckily, the rest went smoothly as we took our time and moved slowly through the rest of the tunnel. I reported what happened to the volunteers just outside the exit. I didn’t stay to see what they did, but it was obvious by their reaction and immediate movement that they were going to take care so that no one else was thrown off onto the rocks.

The next obstacle (Sink or Swim) had to be my absolute favorite. They had engineering difficulties last year and it was shut down by the time I got to it, but not so this year. It was working beautifully. Imagine a row of 3’ x 3’ platforms strung together (but only in their middles) and floating on a pond. Then, imagine running across them trying not to tip them and dump yourself into said pond—a great test of balance and agility with a jump into the water at the end. So much fun! For me, this one obstacle was worth the price of the race. This was followed by two walls to climb up and over (Hurt-a-Lot and Hurt-a-Lil), a great slip and slide ride (Slip Slide & Die) down one last hill, the requisite fire jump, and the finish line.

All in all, this race is very professionally run. Every detail seems to have been thought of and the whole thing runs smoothly. For me, this was my second year to run. For another Spahten in our group, it was her third. I guarantee we’ll be back again next year. 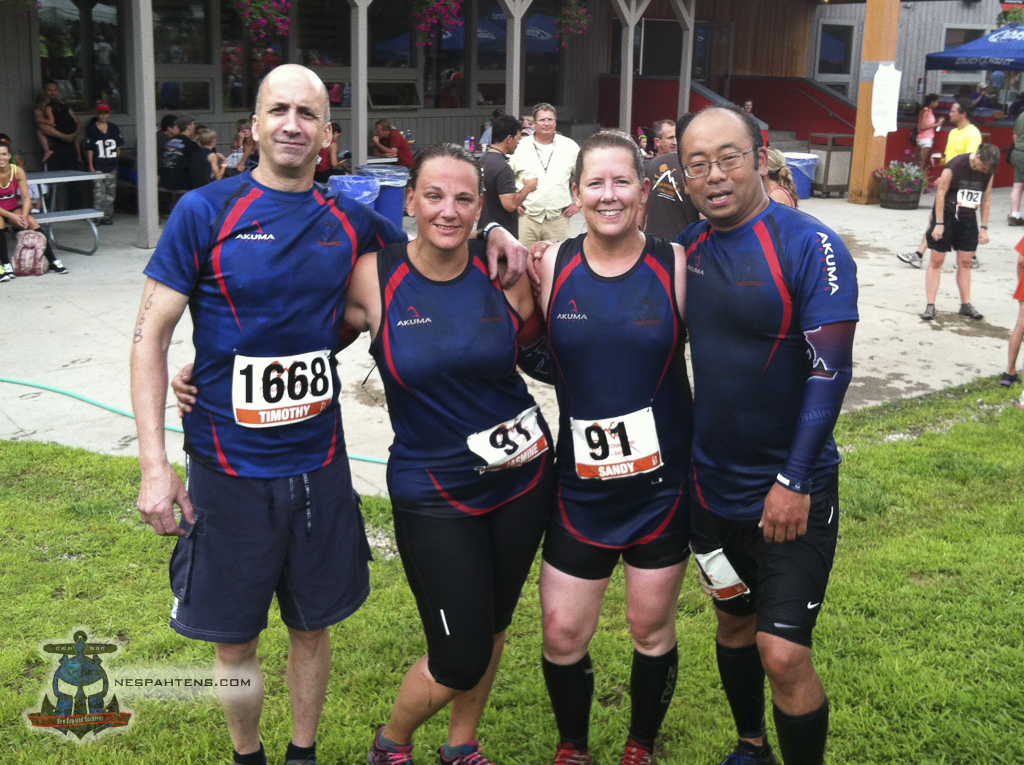 Note: Registration is already open for 2014. It will be capped at 3,500 registrants and everyone will sign up as individuals during the initial registration process. The first person to register can then start a team that others can join. In 2011–2013, teams were required to run and finish together. This is changing for 2014 such that teams will be ranked based on the average of their members’ times. Watch for an event to be posted and don’t wait too long to sign up! Believe me, you want to do this race!