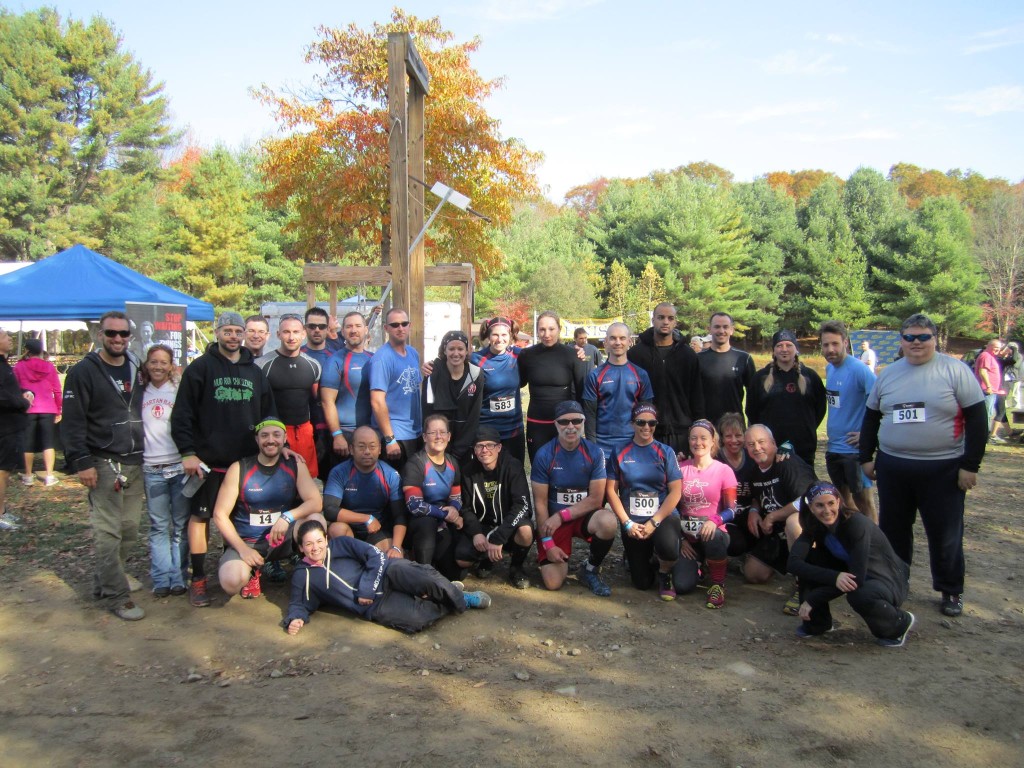 Tuff Scramblers is a smaller (but growing!) OCR held in Rehoboth, MA – though their website makes reference to the fact that they may be hitting the road or creating some new locations.  They hold 2 events a year – one in the spring (usually May) and one in the fall (usually October).

This was my 3rd Tuff Scramblers; my 2nd of the fall race variety.  In 2012 I was still recovering from a broken hand so I couldn’t take on the course in all it’s glory, but I did what I could.  I also remember it was REALLY chilly.  This year the weather was much more cooperative with highs near 70 degrees and no injuries to speak of to hinder my abilities.

Jeff and I arrived really early – around 7:30am.  I think there may have been 6 cars in the on-site lot at the time we arrived.  Needless to say, parking was not a difficult thing at all.  Since we were one of the larger teams, we were offered a spot to set up a tent and essentially make a home base for all of us to gather when we weren’t racing, or watching, or taking in the sites. We found our spot and set up the tent, then hung around by the traditional campfire we’ve come to know and love at this event.  The tent area was conveniently located right across the way from the campfire, and gave a reasonable view of the ending leg of the race.   This was a great way to make use of this little section of land and I think there were a total of 6 teams who were granted the opportunity to use this perk.  I thought this was a nice touch! 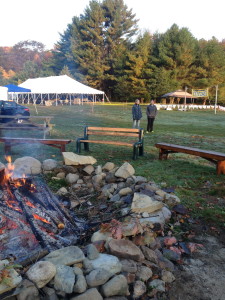 Once we were set up, we headed back to registration.  It was still really early and volunteers were accumulating at this point.  Registration was a breeze.  No lines for Jeff and me.  Since we were recognized we didn’t even need to show ID.  We collected our tech shirts (ladies received pink, and gents received gray – however I understand you could trade colors later in the day if you had a preference for the other color) and pint glasses (which, I discovered have the date on them!) as well as our bibs and free drink coupons (we opted not to get meal coupons at registration so these weren’t included). 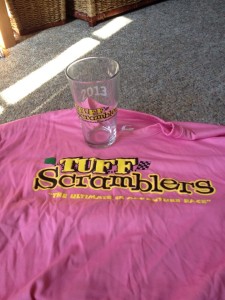 The festival area had plenty going on.  The Air Force had a presence.  Reebok brought their store on wheels and had various shoes and workout attire for sale.  B-Low The Waist had a tent set up.  Core Power was offering samples right near the finish line.  Unleashed set up camp right across from our tent and was using the Salmon Ladder as a contest to win a free spring race.  There was also a food/beer tent.  The DJ was set up closer to the Starting Line but all of the speakers were aimed at the festival area, so there was never a time you couldn’t hear him – unless you clearly weren’t paying attention.

The spectator areas are among the best anywhere.  I was able to watch our elite team run through a number of obstacles without having to move too far from where I initially entered the spectator area, from this one location I was able to watch nearly 8 obstacles be traversed.  The course is set up in just a way that all the boring trail running (let’s face it, it isn’t as exciting to watch someone negotiate technical trail now is it?)  is left out of sight for the spectators, but several times they end up in a rather large clearing where really all of the actual obstacles are set up.  There are a number of photo opportunities and (from the runner’s perspective) it’s awesome to have random people, as well as teammates and family, cheering you on.  I honestly don’t think there is another race out there that has this level of accessibility to the course.

At the Starting Line there was an MC clearly announcing everything we needed to know about the course.  Heats seemed to be heading out a couple minutes early, if not exactly on time.  Since each heat was separated from the next by about 45 minutes, the heats had plenty of time to move through the course without the next heat being hot on their heels.

The course always surprises me.  Sure, the layout isn’t going to change drastically, but I can honestly say that each of the 3 times I’ve participated in this event, the course has had upgrades or changes.  The course start was the same as it was in the spring, but different from where it was last fall.  Each race, the evil mastermind race director adds some new level of fun and crazy to what already exists.  This time around was no different.  You can always count on the pickle barrel hop, and the pillar hop, as well as the balance beam and over-unders.  When you sign up for a Tuff Scramblers race you can count on some mud to muck through, ant hills to climb, and rocks to traverse.  This time around we encountered a pipe a-frame to conquer (think an A-frame ladder wall, but instead of wood use 5 or 6 inch PVC pipe) and, to add a little extra difficulty, we were being sprayed with water from the top.  Also, for the first time ever the hay bales were stacked 4 high – and let’s not discuss how the monkey bars were being sprayed with water too! 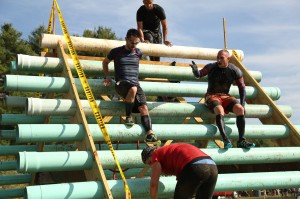 I’d also like to mention the course marking situation.  This year course marking was the best yet!  Both times previous, I lost the trail in the middle of the woods.  On the most technical parts I would focus so much on my foot placement that I’d miss a turn and when I looked up to see where to go I found myself spinning in circles looking for some tape or an arrow.  This never happened on the course this time.  The course was marked so well that I never questioned where I needed to go – even when I was deep into race brain!

There were plenty of water stops along the course.  I actually had to tell a young volunteer that I didn’t need any water at one of the stops.  It was great that the volunteers were standing at the ready with cups of water in hand, so they could just pass them off to racers as needed.  While I didn’t need all the stops, the weather was perfect for a comfortable run, it was good they existed.  The water stop at the finish line was visible to finishers.  Our very own Corrine was volunteering at this station too which was a bonus! 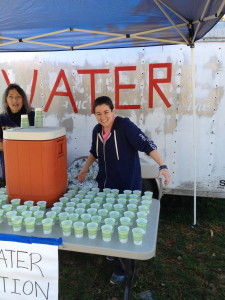 Getting clean is sometimes a challenge after these types of races, but I think they are well on their way to having the market cornered on this front.  While I didn’t utilize the facilities, I did peek at what they had available.  In the spring there were 2 semi-private shower stalls available to clean off.  These stalls were wooden frames with shower curtains and a hose.  The failure was that once clean, there was nowhere else to go to get changed.  Also, the line for these showers was probably about 5 deep all day long.  This time there were 4 stalls (2 for the ladies and 2 for the gents) and they had wooden doors.  Changing rooms were made available in form of horse trailers – which I found hysterical and appropriate being that we were on a farm!  I even heard a rumor that the water was warm (not hot, but also not cold).  This detail wasn’t exactly confirmed.  I did ask around and heard mostly that it wasn’t cold – but we’ll go with it all the same. 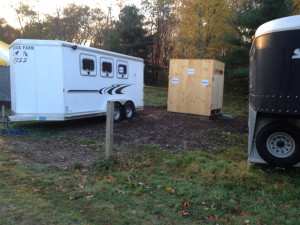 All in all, this event is always well organized and fun.  I’d expect nothing less from the organizers.  The bonus is that it happens to be one of the closest races to my house I’ve encountered to date.

Possible Improvement:
It is really difficult to find any negative points for this event.  While chatting with others, I heard a couple people lament that they couldn’t purchase food.  It seems if you didn’t pre-purchase a food coupon at registration then food wasn’t an option.  While this does allow for quantities and food supply to be managed, it frustrates the individuals who just can’t make that decision so far in advance.  Maybe this can be modified for the future.