Tuff Scramblers in Rehoboth, MA is a challenging, fun, and unique event. It is a 5k course spread over 140 aches with over twenty natural and man made obstacles that offers an experience you’re not likely to find at other events.

This race is a bit of a drive for me, but it’s a drive I’m willing to make because it’s such a great time. It is easy to find, clearly marked by signs directing athletes to the field to park. Parking was within a stone’s throw to where the Registration tent was.

There was a long back up at registration. It was very slow moving and when I got to the table, I was able to see why. There was only one person running the registration table. This meant that she was dealing with bib pick-up, wristbands, t-shirts, day of registration, and any questions. She was trying to be as efficient as possible, but it was clearly overwhelming for her. It is possible that volunteers slated for the Registration tent had not come, however it is something that maybe a volunteer from another location could have been pulled at least for the early morning rush. 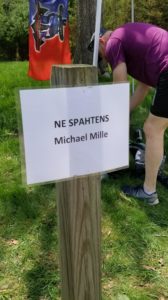 From the registration tent, athletes followed along the dirt road into the festival area. To the left was the changing tents and showers followed by an area where larger teams had been given space to set up a meeting place. To the right there was a man creating chainsaw sculptures that were for sale – he was also responsible for making the pretty epic first place trophies for the elite wave. Also to the right was the makings of a bonfire, though wind deterred the Tuff Scramblers team from igniting it. There were tables set up by the Army,Air Force, and National Guards. There was also a large tent where participants could go to exchange their food and beer ticket then hang out while spectating other runners. The festival area is a low key setup, however it has excellent access to a bunch of the fun obstacles for spectating.

Tuff Scramblers has a course unlike any other I have ever seen. It incorporates trails that at times become single track, weave through the woods, through streams, then back out to the open layout near the festival. In the woods is where participants find most of the natural occurring obstacles. There are plenty of rock formations to scramble over, streams to trudge through, and rocky terrain to hop across. For the most part the course was well marked with pink flags, tape, and paint. However, there were a few who got turned around or missed a turnoff and accidentally cut a small portion of the course. I believe that it was early in the race around the first two hills in the woods, but after that point all the course markers were easily located. There were two water stations on course and the volunteers there were cheery and engaged with the runners as they made their pit stop. 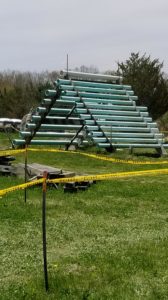 As advertised, you will not find the typical rope climbs and walls at Tuff Scramblers that you may find at other races. Participants will find large sand and clay piles as well as two boulder piles to crawl over. There are walls and an a-frame made of large PVC piping, as well as concrete pillars to jump across. Much of the obstacles that can be found at Tuff Scramblers are created using construction materials. Another thing that should be noted that on this course you will get wet and you will get muddy. Whether it be through a pool of muddy water, of climbing some of the obstacles that have water spraying down at you. The race ends, bringing the participants through a small brook, with about thigh deep to waist deep water. Once you climbed out a bit down the way, there were two options to finish the race. Participants could choose to swim across the pond or take the land route. The pond had a downward slope before it got a bit deep. For someone of average height you could not just walk across. It then had a small incline back out and brought you straight to the finish line. 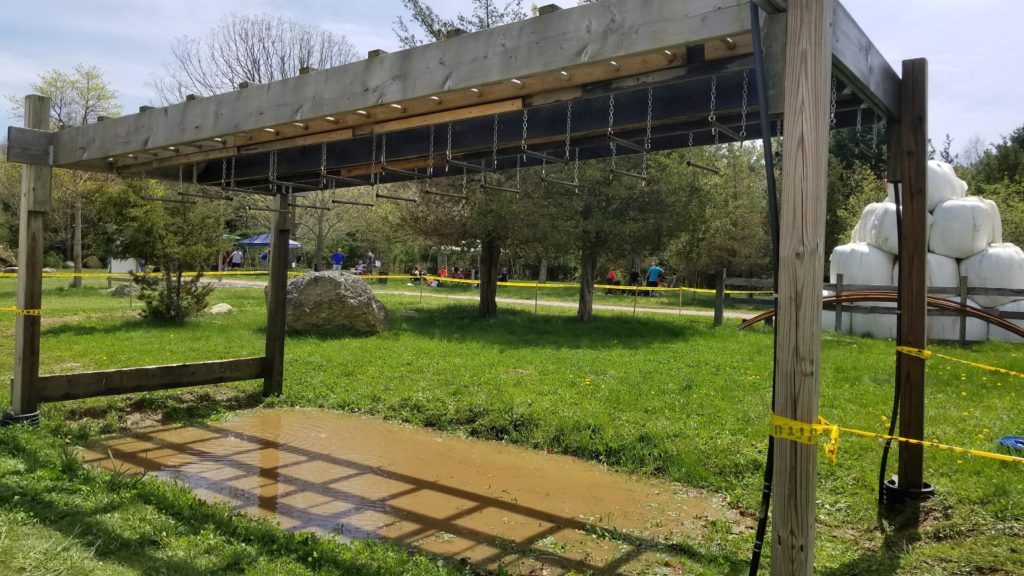 The shirts from Tuff Scramblers are one of my favorite race shirts. It is a soft tech shirt sporting the Tuff Scramblers name on the front. On the back has the date and location of the event as well as a statement that they proudly support the various branches of military and the EMS team that was present at the event. The medal ribbon displays the date and location of the event, which is always a nice bonus. 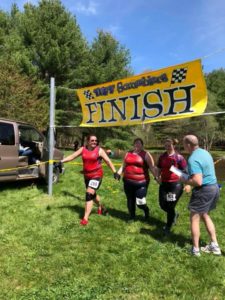 After runners finished they were treated to food and drink. You could use your Beer ticket to exchange for a beer or non-alcoholic beverage. As someone who does not drink beer, I appreciated this because I could exchange my ticket for an iced tea. Those who do enjoy beer had a variety of Narragansett beers that they could pick from. Runners get quite the treat when they finish Tuff Scramblers because they also get post-race food included in their registration. We got two sliders with either pulled pork or sausage and peppers, a salad, and a choice of two different types of baked beans. The food was excellent and really hit the spot afterwards.

Over all, despite a few very minor kinks between registration and course marking, this is still one of my favorite events. It offers such a unique experience and atmosphere. The shirts being my all time favorite, is simply a bonus.