Wicked Mud Run is a central MA based OCR held on the venue used by Elevated Training – we sent Nicole along to check them out!

This Saturday, I headed to Shrewsbury, Massachusetts and Ski Ward to represent the NE Spahtens at Wicked Mud Run. It was one of my first media gigs, and I was very excited. Judging by the Facebook event, the team was going to have a small turn-out, but I was planning for fun nonetheless. The sun was shining. It was cool and comfortable. It was the perfect day for a 5K obstacle course race!

I arrived at Ski Ward about an hour before the scheduled team heat. As per the email sent to race participants, parking was free. (Spectators too, which was nice because it looked like some people brought their kids.) Ski Ward is, in the words of the British, “wee.” It’s more of a bunny slope than a ski mountain. In keeping with that, there was a small dirt parking lot in front, and then a small lodge at the foot of the hill that served hamburgers, ice cream, and beer. The parking was steps away from the festival area. You could leave you bag in your car easily. They also provided a free bag check, which is what I did, having no place to leave my car keys otherwise. These nice little perks – free parking, free spectators, and free bag check – definitely provided a good impression.

After getting out of my car, I headed into the festival area to pick up my bib. Here I hit a bit of a snag. The registration and bib pick-up line was long and slow moving. At one point, they even had to take people who were doing the 11:00 a.m. heat and have them cut to the front of the line so that they’d make it to the starting line on time. As it was, the first and second heats ended up starting a few minutes behind, though nothing serious. Spending a fairly long time at registration at a pretty small race is kind of a hassle and could have been avoided by having more volunteers at registration. (That being said the volunteers that were at registration were awesome! Sorry you guys were so overworked.) On the plus side, I got to spent my time in the registration line chatting with fellow Spahten Marc, who was volunteering, so I cannot say that I had anything other than a pleasant wait. 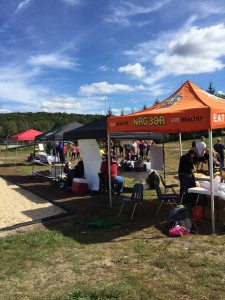 After receiving my bib, I decided to walk around the festival area. It was very small, but the booths that were there were interesting. There was a bag check that was giving out Honest Tea. Zoobells was there – these kettlebells are seriously so cool, and I really want to get some; the koala is extra adorable. There was also a local obstacle course racing gym. The tables were limited, but it was a nice assortment of small and local businesses. The festival atmosphere was enhanced by a live band that was playing on the far side of the starting coral.

Soon, they called our wave. I stepped into the chute with a couple of other Spahtens. There were some brief remarks, music played, a horn sounded, and without much fanfare, we were off.

The race started with a short wall of around 4’ followed by a climb up the hill. There was a small backlog at the wall but nothing serious. I quickly rolled over the wall and begin jogging/hiking up the hill. Next up was a ladder wall. It was short – probably around seven or eight feet, but it was given some interest by having the rungs on the far side of the ladder wall be on a diagonal. 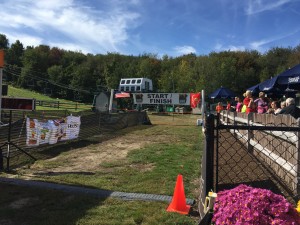 We then entered a stretch of wood with some trail running. The terrain was nice featuring some rolling hills with rocks and logs mixed in. It served to keep things a little bit interesting. In the woods, we encountered an inverted wall with a net attached. I was running with fellow Spahten, Shaina, who is a regular at Elevated Training. She mentioned that normally the inverted wall and the net are two separate obstacles. Today, for Wicked Mud Run, they were conjoined to aid people with the wall and make things more beginner-friendly.

After the climbing the net and sliding down the inverted wall, we headed down the hill to a very short rope climb. The climb was maybe 8’. Max. I did the j-hook and two pulls up and I was to the top. I dropped down and was ready to slalom my way back up the hill.

From this point, I do not exactly recall the precise arrangement of the obstacles. I remember doing a slightly taller 7’ wall as well as some short hurdles. I fondly remember doing a set of monkey bars, which served as my favorite obstacle of that day! For this obstacle, there were two lanes. One was just widely spaced monkey bars – around a half dozen of them. The other, featured a horizontal bar, from which you had to transition to around three or four monkey bars. I chose the latter and had a blast on this obstacle. I had to get a good swing going to make it from one wide monkey bar to the other. After the monkey bars, was a taller eight or nine foot wall. All of the walls featured kicks and were very manageable. 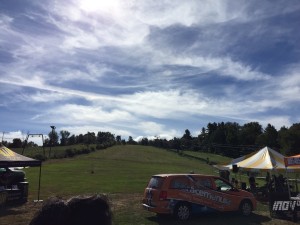 Next up was the mud portion of Wicked Mud Run. We had to wade through a couple of muddy trenches that went up to my belly button. This was more water than mud though, and I didn’t get terribly dirty during the race, which is fine as far as I’m concerned. Then, it on to another pair of trenches of similar depth, this time with a pair of logs in each that you had to go over or under – I chose over. Following that was a sandbag carry. I usually dread carries, but this one was a short out-and-back a not very steep section of hill. Plus, the sandbag was probably 15 or 20 pounds at the most. I was happy to be able to jog the down section of the hill.

From there, it was another set of watery-mud pits (which were seriously nasty) follow by a small angled wall with a rope. This wall and rope climb was short – probably around 7’ and fine, even with wet shoes. Next, we headed a short ways back up the hill before descending to a slip-n-slide. I’ve been wary of slip-n-slides since 2013 and the Superhero Scramble’s disastrous slip-n-slide in Amesbury. However, the one at Wicked Mud Run was nothing to worry about. It was short and not that steep. A friendly volunteer with a hose, who was manning the obstacle, told me to run and dive. I apparently didn’t run and dive hard enough because I ended up like a beached whale about midway along the slide. I had to paddle my way forward, as another volunteer recommended soaping the entire obstacle. (Yes, this was entertaining.)

From there, it was a very short run to the finish line, which I crossed after around 50 to 55 minutes out on the course. I was handled a very neat medal. (Though no t-shirt – those cost extra.) 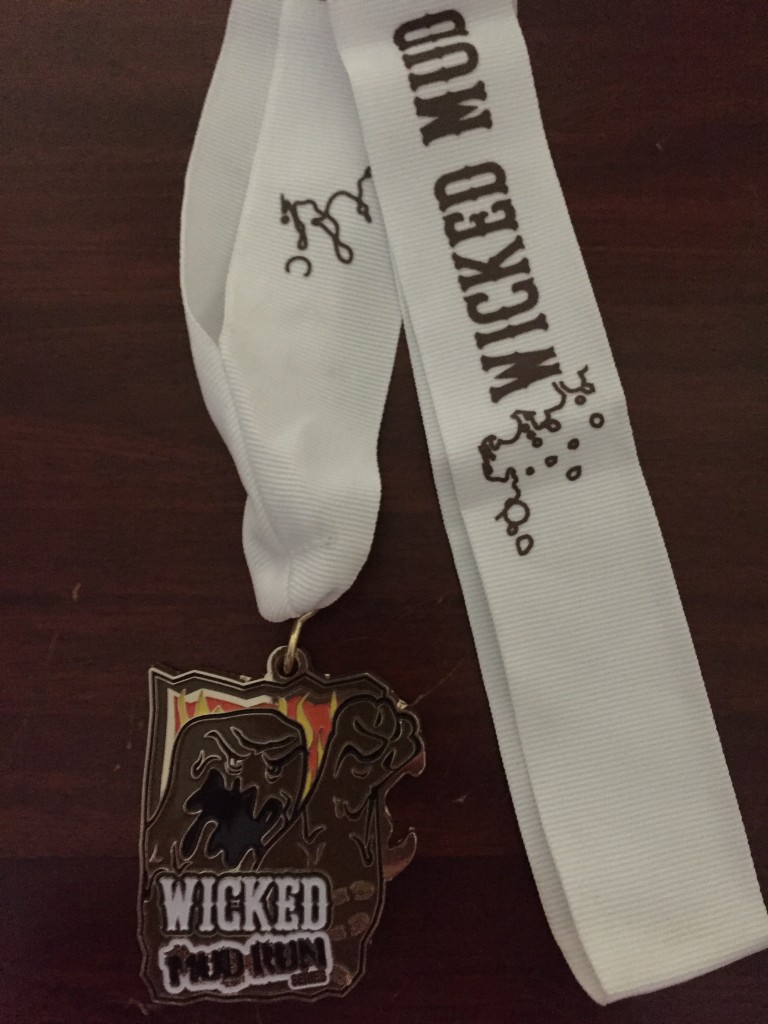 Honestly, the biggest challenge of the day was finding some place to change out of my wet race gear and into clean clothing. With no changing tent and no rinse station, this proved a bit of a logistical problem. I ended up hiding out in some random ski boot rental location at Ski Ward to change my clothing and try to towel off. (I had a lunch date with a friend and had to look at least somewhat like a normal person! #ocrproblems)

This race, appropriately, seemed to attract a lot of first time obstacle course racers. As I traveled through the course, this made sense. The course was, for lack of a better word, friendly. There were no serious climbs, though we went up and down the hill at Ski Ward around four times. The obstacles were small and simple. Only one or two provided any real challenge in my mind. (Note: To be clear, I race at Shale Hill. A lot. My sense of what is normal may be warped by this.) Ski Ward is home to Elevated Training. I would have loved to see Wicked Mud Run partner with them and use even more of the Elevated Training obstacles in the course. Fixed obstacles, like the rope traverse that Elevated Training has, were bypassed in the Wicked Mud Run course to provide a more beginner-friendly experience. Again, I speak of this as a “criticism” only as someone who has done a fair bit of obstacle course racing. For the person doing their first race, Wicked Mud Run is a good bet – it’s not too challenging, the course is well laid out, and everyone is very friendly and encouraging. I cannot think of many courses where I have been cheered on as much as I was at Wicked Mud Run. The volunteers were simply stellar about this.

Wicked Mud Run does need to sort out some of its details. Registration was a big inconvenience. So was having nowhere to change. These sound like small criticisms, but they are key things and need need to be handled well.

Bottom line: This race was not for me. It’s for the newbie obstacle course racer trying their first race. I had an okay time. My enjoyment was enhanced by the cool people on the course. The obstacles, for me, were a bit simple and easy. Yes, I do a lot of obstacle course racing and prefer challenging course, so I am coming at it from that perspective. All that being said, I definitely think the registration snafu needs to be addressed if this race wants to attract a larger crowd. At around $30 to $40 per person, this race is a bargain and good for first-timers wanting a very beginner-friendly race. Would I travel out to Ski Ward for this race again? Probably not. But then again, it’s not for me, is it?