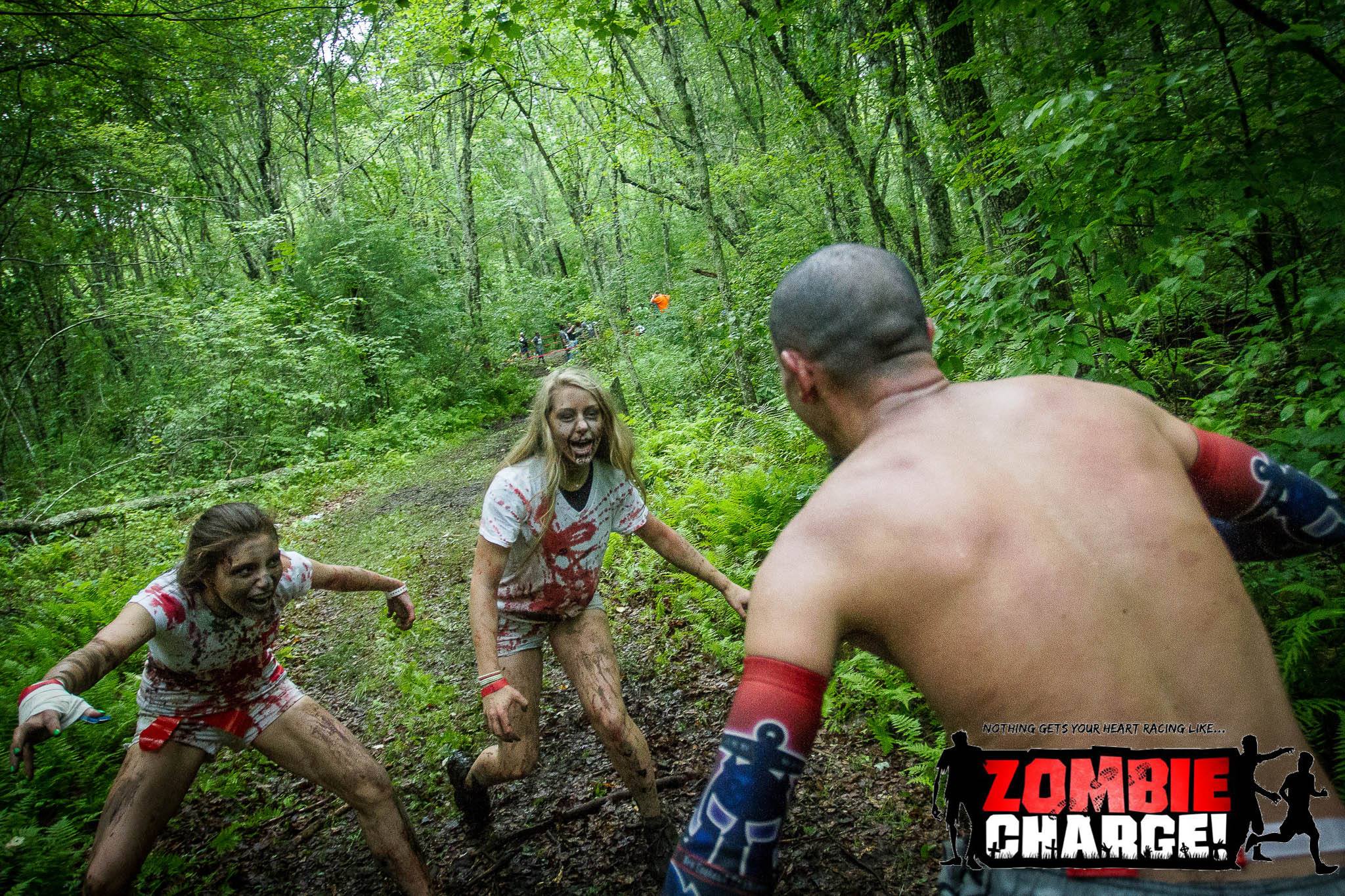 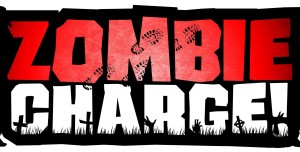 This was Zombie Charge’s second year in CT – but my first Zombie Charge. It was also the first time I’d done a flag capture style event – so getting up early on Saturday morning to drive nearly two hours to the back waters of CT seemed like a great idea!

You may be familiar with the format, from the now defunct Run for your Lives – you start the race with a flag football belt and three flags – as you move through the course and obstacles, zombies will attack – their intention is to snag your flags until you don’t have any left.

This results in both hilarious acrobatic moves – and lots of sprinting.

Which is exhausting work!

The venue for Zombie Charge was an old rock and stone quarry in CT – easy to find with a GPS, but I did nearly drive right past it – but once you hit the venue there were plenty of flag markings showed you where to go next – driving between giant rock mountains was kinda cool, and I imagine later in the day when they had zombies down there, it was even cooler – alas, I had to bail after the first wave of the day, so I was there too early for zombies.

Parking was super easy, and plenty of it – I thought $10 for parking was a bit steep, but it was super close, and these days it’s becoming an OCR norm, which is unfortunate for OCR fans. 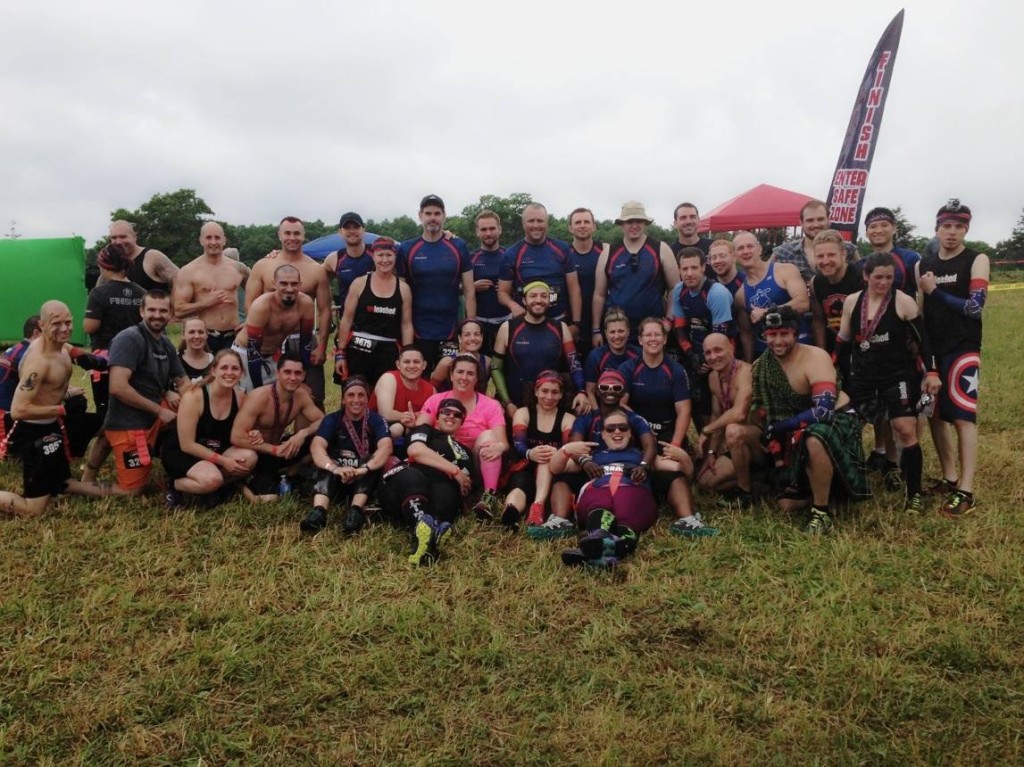 Check in was super easy – I had my bib number and waiver printed off like a good boy, so they handed me a packet, slapped a wrist band on me with my wave time on it, and gave me some instructions on how to redeem my beer and T after the race, which I promptly forgot entirely. 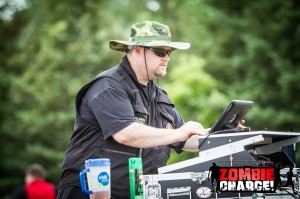 The festival was good, even that early – a good DJ, cracking jokes and telling people whats coming up next can make all the difference if you want a fun pre and post race party. Zombie Charge had a few vendors there too – Unleashed and Playout Cards being the most notable for me, but there were some local folks, a haunted house and a local photographer with a green screen. We setup camp behind our Unleashed friends, but everything was easy to find.

My personal scheduling meant I couldn’t hang around much afterwards, but I was easily able to pick up my shirt, which was a nice quality mix-blend shirt, with a relatively subtle design on it – no sponsors, no dates – just a brand name and cool zombie face – while I have many bright colored, gaudy, cheap race shirts I’ll never wear, this will be one I’ll happily put into my rotation. I have no idea how the beer and food situation went, as I had to bail quickly, but I didn’t hear any grumblings.

The race itself was running to schedule – a 10am elite wave was the first one of the day, with them going out every 30 minutes after that until mid afternoon. 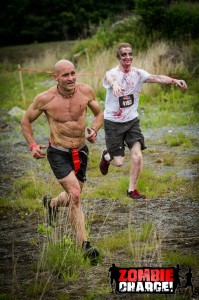 My GPS clocked this race at a little over a 5k, and they made great use of the unique features available in an old rock quarry – several times found us scrambling up giant gravel mounds, or sliding down huge sand piles – sometimes requiring the aid of ropes (and genuinely needing them too, unlike some races I’ve seen!) – after we ran through the quarry a few times we moved out into the trails – never quite narrow enough to be considered single track, they were still technical – before finally opening up into fields for the last 3/4 of a mile or so.

The obstacles we encountered were mostly pretty standard. Several really big (like, 9′ or 10′) walls, some ladder walls, some truly tricky mounds of mud between trenches, and on particularly nasty fence laying flat over a muddy pool you had to partially submerge your face to get through. There were some wrecked cars to navigate and everything from rope webs to fallen trees – the final obstacle – the slide – needs it’s own special mention, because it was done well! Wet, wide – and while the final run off was fast and ended in a muddy mess, there didn’t seem to be the gravel issues that tore people up at SHS previously – in fact, I commend the race directors here – they approached me after my race, and asked how I enjoyed it – I mentioned that the slide had the potential to get messy and dangerous as the day went on, and they immediately grabbed more tarpaulin’s and stacked them up – just in case. If they needed them or not, I do not know, but they were there, and ready if they did.

Of course, despite this being an obstacle course race, it wasn’t *REALLY* about the obstacles. They needed to be there, and they needed to be good – but they get a pass for not being particularly challenging or technical or complex, because – zombies. 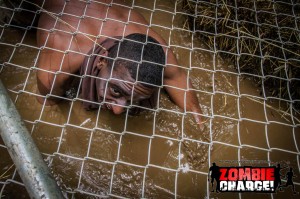 Like the now defunct Run for your Lives, and a few clones – you picked up a flag football belt at the check in. As you ran, volunteers made up like zombies would chase you, and steal a flag. The goal was to end the race with at least one flag to be considered alive. There was even a paintball station on course where you had two shots at a chained up live Zombie (a volunteer who picked the short straw) – one paintball to his nuts, and I had another flag!

Yeah. I didn’t keep it long.

There were approximately 160 total zombies, and they were everywhere. Sometimes, you’d see them clustered on a path, and you could dodge by them to save your flag. Other times they’d jump out and scare you, hoping for a quick grab of a flag. Frequently though, they would chase you – sometimes for some considerably distance – after a few chases down paths and a few ninja like (shut up) evasions, I was EXHAUSTED. Just totally shot. And dead.

The zombies were good. Dare I say, too good? I found myself gassed by a mile, and dead. Which meant that I had no real reason to keep trying, so I just jogged. I earned a flag back with the aforementioned nut shot, and promptly lost it on the next trail, also finding myself with a rolled ankle, which meant I had to walk past the next 3/4 of a mile of zombies with a shrug.

I know, I know. Zombies are aggressive, and this style of race is designed to get your blood pumping – and it did, and I had a BLAST – but I definitely didn’t feel like I had a chance of finishing alive in this case – and in conversations with zombies later in the race (those that broke character for a quick “keep it up!”) it was clear they weren’t getting much flag action either. Lots and lots of people in the first wave of the day were simply not getting through with flags. 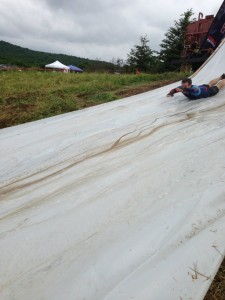 They were awesome though – well made up, with some great costumes – there was a mix of walking / grabby zombies (big shout out to the two older ladies in the quarry who couldn’t help exclaim “damn, they split up!” as Amy and I went opposite ways) and running zombies – my favorite was the young lady in the ball gown who knew I didn’t have any flags, but chased me for a few hundred yards anyway – in character the whole time!

Is that a bad thing? Is it a negative to have aggressive zombies? I just think it needs to be dialed in a little bit – let us *think* we have a chance, and give the zombies later in the race a shot too. This kind of event lends itself heavily towards rolled ankles (check!) due to the super ninja evasion techniques we all perform – but thats the nature of this particular beast. At the finish line, we all got the same T and medal, so there wasn’t REALLY a big incentive to finish alive – maybe if there was, I’d be a bit more upset that I was dead in a mile? Either way – it’s presented here as simple feedback, not a complaint or a check mark in the “bad” box.

Either way – the zombies try hard, meaning you have to try harder. They look great, stayed in character as much as possible, and were mostly respectful of not causing accidents or grabbing more than one flag, but I did hear rumblings that some people felt they over stepped – again, par for the course in this style event, I think. Everyone is rushing, everyone is making split second decisions – if a zombie grabs more than one flag, or you bash into someone harder than intended – thats just gonna happen. 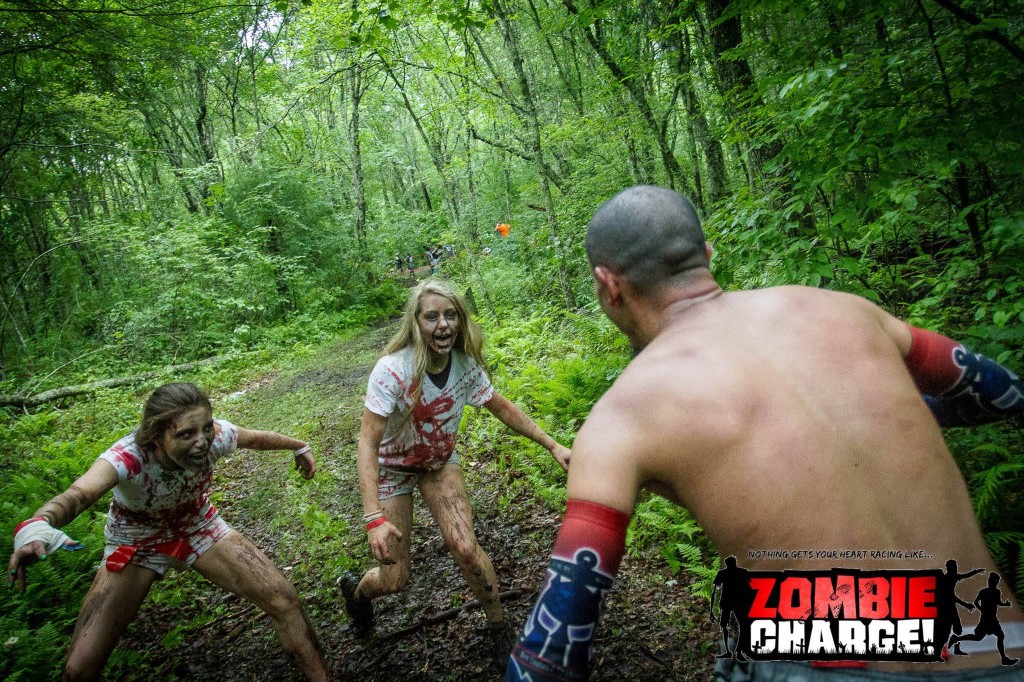 Zombie Charge was also the final race in our #Racelocal Grand Prix series, and they closed it out in style – helping us with elite level timing (despite not normally doing timing) and shuffling people in and out of the waves they needed – big thank you to them for that!

I had a blast. I will be back! Thank you to the team behind Zombie Charge!