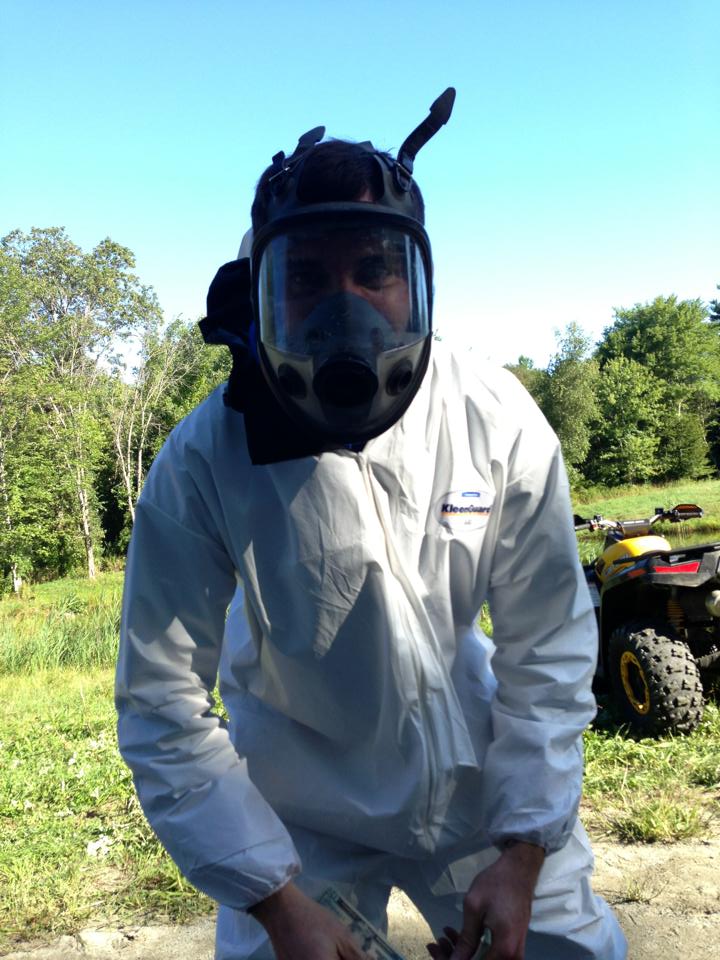 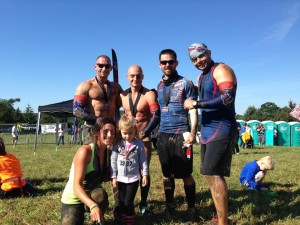 It was a Weekend 6 Deep in OCR races. While Most of our fellow Spahtens found themselves in Jersey on the Quest for Trifecta… Myself and 11 other brave souls found ourselves in the middle of a Zombie Apocalypse.

@#$% !  – They got me… it was only 3.5 miles to the safe zone… with a mile left i let down my guard – and that zombie caught me off guard.. I’ve got 30 minutes before the bite is fatal and I turn into one of them. I can already feel the infection spreading up my arm – gotta move fast before i black out.

Ugh.. a cornfield. This isn’t smart but i don’t have much of a choice.. I go around – Im dead.. I cut through the cornfield, i might make it to the safe zone before the infection takes me down. Its a risk I have to take. As I emerge from the cornfield I can see the safe zone sniper on the barn, he is keeping the way clear. So far i am only the 3rd citizen to make it the last 3.5 miles to the safezone – down the slide and into the decontamination area. Doctors Immediately administer the Vaccine, a shot of something i take without thinking twice, then into the bio hazard clean room – and finally hit with an extra dose of anti-Z-infection powder. I get the green light from the Doctors I am clean.

Made it to the safe zone. I am not dead, I am not a zombie… I hope the rest make it. 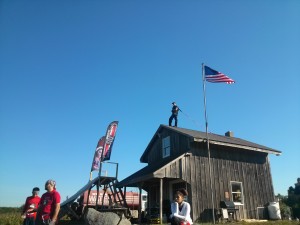 When it comes to themed races its the little things that really count. ZC made sure you questioned whether or not you were actually about to be eaten.  From The Staff directing traffic and parking in full body hazmat suits to the Paratroopers (yes, they actually had people Parachute into the safe zone) to Snipers positioned on top of barns popping off rounds at Roamers that got to close to the safe zone. It is those type of things that really make you appreciate the effort these guys put forth on making sure you had a good time. Let’s not forget Celebrity Guest Addy Miller “The Little Girl Zombie” That set the tone for the Entire Walking Dead TV Series : (Caution, Video is Graphic – Not for the kids!) 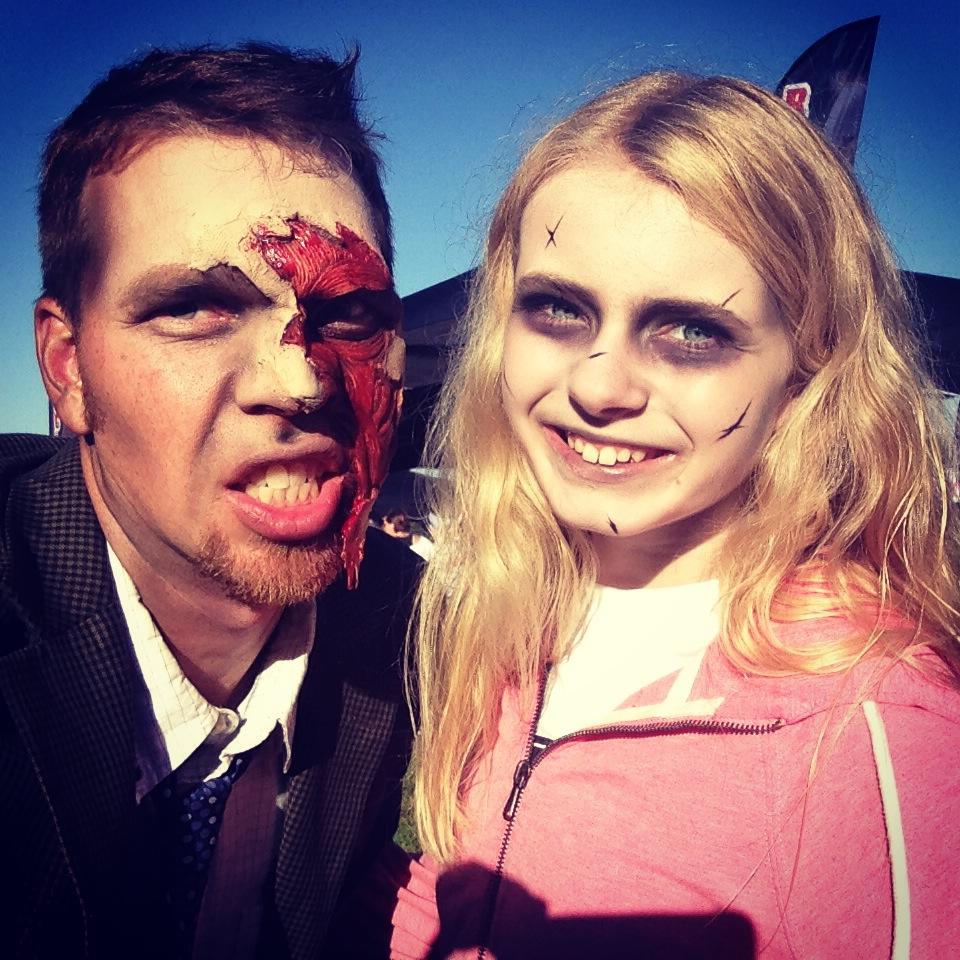 Addy was there signing Autographs and posing for pictures in the festival area. Festival area was spacious for the People, Registration was smooth. Bag check was free and there was a decent amount of Vendors including Zombie Merch and Food.  Race swag was an A+ from ZC. Racers got a Shirt and a ZC Hoorag and the Survivor Medal was some quality Bling.

So lets get to the actual Race / Survival run for the safe zone.   This was an UNTIMED event. Something that many of us were not aware of before hand. This is not that big of a deal, as your big name Tough Mudder is not timed either. However, I personally think ZC should get themselves a timing company for future runs.

The Course itself was pretty awesome. GPS Watches recorded between 3.2 – 3.5 for the race. Mario and Myself were the 2nd and 3rd runners to come in from the first wave and guessed our time to finish around 35 minutes give or take.  The area had some nice up and downhills, Plenty of Nice technical trail, including some long stretches of wide open trail and some Treacherous Rocky terrain – nothing much for running OCR vetrans, but Newbies could have defiantly bit it hard in a few spots.  Race Director Eric was waiting for us at the finish and was anxious to here our thoughts on the course immediately – When Mario and I gave him our thoughts on the above mentioned rocky spot on course – they staffed EMTs at this area of the course to ensure immediate assistance if anyone was to injure themselves here. Good Move ZC.

What alot of people do not realize at these Zombie themed events, is that they are one hell of a workout. You wear a 3 flagged velcro belt – this is your life and this is what Zombies Want. To survive you will find yourself running and then all out sprinting to ensure you keep your flags. This Zaps your energy quickly – if there is anything to keep in mind when in a Zombie Apocalypse.. its Rule #1: Cardio:

The Course had a mix of I would say 4 Types of Zombies (unconfirmed, this was my take on the Zombies).  Type 1: Roamers – These guys pretty much there for intimidation. You would have had to run right into them to lose a flag. Type 2: Stationary – These ones were actively reaching for you, but couldnt really make it more than a few steps either way. Type 1 and 2 were easy to avoid unless you were me, who turned my back and walked into one that had stumbled out from behind a boulder. Type 3: Aggressive –  They were pretty intent on eating your brains.. err… i mean flags. They had pretty good reflexes but couldn’t really go very far. Then there was your Type 4 Zombie Chaser… the OMG 28 Days Later – all out Sprinting Zombies. These guys were scattered throughout and you didnt know it until you heard your fellow survivors start screaming “Chaser!” and everyone went into an all out sprint. These guys would chase you for a good 100 yards- or chase you into another pack of Zombies.  This made it pretty exciting – and made you try and find a safe spot to catch your breath. Key to survival is to be faster than the slowest guy.. and not be alone. There was 3 (Mario and Myself +1 unkown survivor) of us that took a pretty substantial lead on any other survivor. This in turn made Zombie Dodging a lot of work. 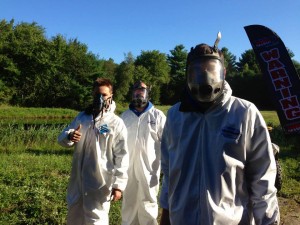 Obstacles – Some crawl tubes, Slanted rope wall, Some vertical wall jumps, mud crawls under chain link fence, natural and man made ditches full of water. Monkey Bars. Spider Web (rope strung around trees forcing you over and under a weave of ropes) a Corn maze, Cargo net climb and lastly the infamous obstacle in the OCR community – a Water slide.  The Obstacles were “OK” Zombies and the terrain were the real challenge of the course.  You will also be reassured to know that ZC did the slide right. Safe, Hay baled around the sides and at the bottom for a crash pad no torn up ass or back. The slide was fun!

Water – The course had 2 water stops. I actually never saw 1 of them – but was told after the fact by fellow runners there was 2.

Overall – a well priced fun race to run put on by Race Directors that really did care about making it worth your money and that you enjoyed it.  If they are back next year and hopefully not booked on a super busy weekend – you will check them out.

Spectator Quality: A- : Live music, some vendors – Zombies roaming about, Celebrity Guests, Skydivers. The slide finished within spectator view, and spectators could see the Cargo net area of the course if they chose too. Spectators couldn’t see much else of the course other then on the drive in to the parking.

Race Course:  A: This was a quality Race Course – Completely stand alone it would be a great trail race – throw in some Zombies and Obstacles and it made for a Good Time.

Runner Support:  A: 2 water stops and a decent amount of volunteers and Zombies spread out made it so that if you were alone without fellow runners, there was always someone… or something close by.

Race Bling:  A+: T-shirt, Hoorag and a nice medal. 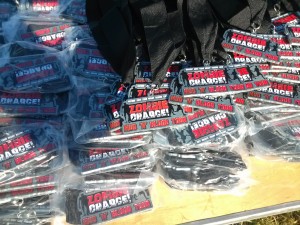 Timing System and Results:  C : I give this a C, rather then a “Fail” because while this event was not timed by chip or manually. The point of the event is to Survive.  I personally would like to see timing in the future .  Some of us treat race results as important as a race medal.

Staff, Volunteers and Directors:  A+ : Staff done up in Biohazard suits, Race directors were on site, actively engaged with all the runners, Volunteers and Zombies adequately supplied. Made for (from a runners perspective) well organized and smooth.

Final Thought: Zombie Charge was a good event, a better atmosphere then you would see at RFYL and a fun course to run.  I can say that Zombie Charge is “Spahten Approved.” 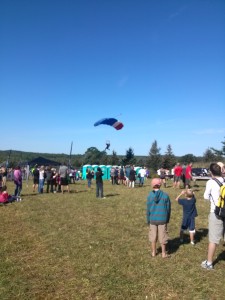