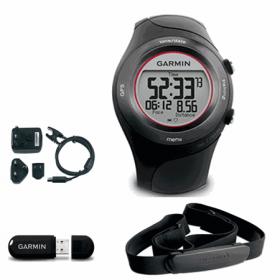 I picked the Garmin Forerunner 410 up during a holiday sale – watch and heart rate monitor for $150 – and it was my first GPS style watch. I wanted to start tracking my races, without the hassle of dragging my iPhone with me.

So – one thing the watch needed to be was durable. It was going to get submerged in muddy water, knocked over walls, dragged through barbed wire crawls, sunk in mud and who knew what else …

So far, so good. It’s taken anything I can throw at it so far, and is still going along, and doing it’s job well.

Being my first GPS watch, I can’t comment on it’s time to lock in a GPS signal, it’s quick enough, but sometimes I do find myself making sure I’ve started it up early enough. It’s battery life isn’t so good you can wear it as a normal watch, and it’s a little bulky for that anyway, but it’s never died on me. It has an internal rechargeable battery, and a weird clip to charge that has two metal prongs that have to make contact – don’t like that. I’ve had to pull mud from the contacts before, and would have preferred some kind of simple, standard USB or mini-USB connector.

The interface on Garmins is odd. Just … odd. I use technology all day every day, and interfaces for watches, phones and other stuff is usually no big deal – I’m still trying to figure out how to drive the Garmin properly, and find myself turning somethings on and off without knowing how. It also has a touch bezel, which I find gets in the way and is pressed by mistake more than I’d like, although there are no moving parts … after one race, the watch was so gunked up, I couldn’t get the touch bezel to respond at all, and I ended up tracking my hour and a half drive home – that made for an oddly plotted map!

I do love that it auto-syncs. I pull my car into my garage after an event, and my watch beeps – it’s within range of the dongle on my Mac and is synching up … by the time I’m unloaded and changed, I have a map waiting for me, ready to edit.

Mine came with a heart rate monitor strap that I’ve never worn, so can’t really comment on that.

The online interface is ok – it looks a little dated, and feels more complicated than it needs to be – but it gets the job done.

Overall, it’s a nice enough watch. Despite not being rated for water and submersion, it’s not failed me yet, and I’ve had it underwater more than a few times (and mud, slime, gunk etc). It feels more complicated than it needs to be, but seems to be reliable and rock solid.