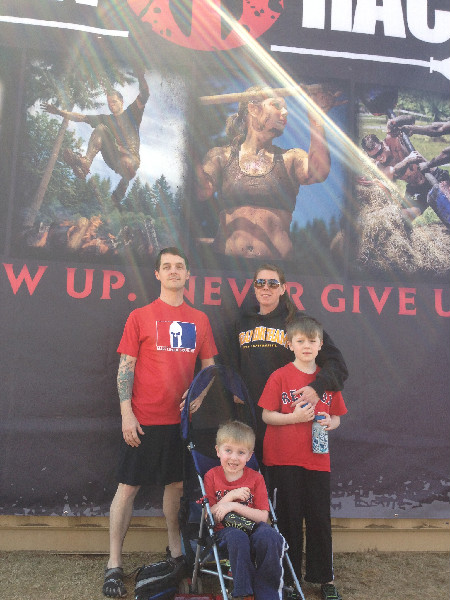 The day started, for me, at 4 a.m. CST. I woke my two boys up, Colin and Alex, then began the process of getting my wife, Leah, up. By 6 a.m. CST, we were all loaded into the Jeep Commander and were en route to Conyers, GA for the Spartan Race. This would be a first for all four of us. Not that we didn’t try to get to one before, but due to a broken hand in ’11 and moving to Tennessee in ’12 our plans at doing a Spartan Race got put on hold, and it seemed like we would never get there. Alas, we were finally on our way!

The day was about adversity from the get go. My wife and I were working on our coffees, doing our best to get ramped up for the ride and the race. I had brewed a whole pot of coffee and had it waiting in a carafe. First, I forgot to bring any sweetener, but we could deal without it, we just needed the caffeine. Leah grabbed it and went to pump, nothing came out. I had forgotten to put in the rubber gasket, no suction, no coffee! 🙁

Our drive took nearly 4 1/2 hours, not too shabby, but by the time we got there it was no longer CST it was EST, so we technically lost an hour, time travel sucks!

We arrived just a little after 11 a.m., grabbed our packets and got in line for the kids race. Alex (9) and Colin (5, the day before was his birthday) were super pumped, they couldn’t wait to get their bibs and shirts. We rushed to find the starting line for the kids and Alex’s heat was first, a 1 mile course (basically the course they had laid out with two laps). A couple characters walked toward the group of kids awaiting the signal to go, Hobie Call was one of them. For years now the boys have been watching Spartan videos with me, and have seen Hobie in nearly every one of them. They look up to him and were psyched to see him there. Alex pushed even more toward the front and looked back at me with a grin when Hobie gave him a high five! After an inspirational speech and some stretching, guided by Hobie, it was about time. The guy running the race asked a few parents to head out on the course to make sure the kids were getting help where they needed it, I jumped at the offer, not only to be part of it all, but I wanted to take pictures!! 😛

Just as I hit my obstacle, the over under walls, the kids were racing by. I caught a glimpse of Alex, still holding to the front of the pack. They rounded the first clip of running and were immersed in mud on the mud moguls, with mud pits below. After hitting three or four of them they sprinted toward us and pummeled the next obstacle. They rounded the corner and they were upon me, like a swarm of locusts. all of them pushing so hard not only was their faces caked in mud, their was snot everywhere. Alex hit the walls and conquered them with a good amount of ease, and less snot.

As the bigger kids were on their second lap, the younger group began, and my wife ran with Colin. Colin is a great kid, full of personality and the like, but both Leah and I were unsure how he would do. Yes, he was amped up to do the race. He and Alex have been to two different expos with me manning the Spartan Race booth (at the Hyannis Marathon Expo and the Boston Marathon Expo), so they know what it is about. Colin, much to our chagrin, took off and never stopped. He hit each obstacle with no fear and ran the whole 1/2 mile! He was a stud, and we are both immensely proud of him, and Alex. They killed their first Spartan Race!!

It was the adults turn, Leah took the first round and jumped in on the next heat. The boys and I waited her return by the barbed wire crawl and gladiator pit. We saw some devastating hits, the gladiators were relentless. Man, woman, it didn’t matter, they were flattening people!

We saw Chris Davis come though with his crew, which was quite inspiring. I have been following his story since day one, that guy seriously has some motivation behind him! We saw Michael Mills hit the barbed wire crawl in inspiring fashion. We had the best seats in the house!!

A little over an hour and forty minutes later, Leah came blasting through and finished strong. She looked at me and asked when the next one was! She was hooked, the Spartan kool-aid is strong!!

After she rinsed a bit of the mud off, I headed out for the next heat.It was electric. I had done OCR’s before, this one felt different. The crowd was overwhelming. Strangers looked to their left, looked to their right, and didn’t see competitors but friends. We knew we were all in this together, and we were all going to make it out the other side, one way or another. Off we went…

It was a short sprint to the first obstacle, or at least seemed that way. They were somewhat simple over walls, reminiscent of plastic jersey barriers or something. Onto the next, which at this point became a blur. Forgive me if I get some obstacle names wrong, but from here on out, in no particular order, the obstacles were:

The thing I feared most, the spear toss, I nailed on the first shot. The obstacle I was confident on, the traverse wall, I had to do burpees for after falling off. The running part felt good, I was shocked at how well I was able to keep pace. I had found someone I wanted to shadow the whole way and was pretty much able to.

And just when you think you are done, you get your shirt, you get your medal and then it’s off to the “showers”. THEY SHOULD HAVE CALLED THIS AN OBSTACLE!! It sucked the most, and I would have burpeed out of it if there were a way the mud would somehow have come off. It wasn’t the fact the water was cold, it was the hoses themselves had some crazy weird pressure and it felt like the skin was being sandpapered off of my body. Leah concurred, and we both heard many other folks talking about it. Do we get extra credit for this??

All in all, this was hands down one of the most amazing moments in my life. It brought Leah, the boys and I together, we conquered some of our fears and arose triumphant. The only thing left to fear, Atlanta traffic and the drive back to Nashville!