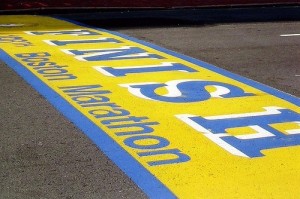 To me Runners are dedicated, driven individuals who dedicate every waking moment to running.  They know what split times mean.  They have regiments on how they run.  Fast days, long runs, speed work, fartlek (they know what a fartlek is). They have paces, and goals.  You see them early in the morning and late at night.  They do every race they can find.  Especially the ones that clog up major roads on Saturdays.  Runners wear bright obnoxious colors and speed along effortlessly from intersection to intersection attentive to their stride and pace.  Runners have white strings that dangle from their ears that they believe makes them invincible to motor vehicle traffic.  They “carb load” other strange rituals.

But I pay attention to the Boston Marathon.  I know someone from Kenya is probably going to win it.  And if they don’t it is World news.  I know that there will be amazing stories of triumph and courage, perseverance and endurance.  It seems I always know someone who ran that year.  But I always find out about that after the fact.  This year I knew over 20 people running.    Why do I know that many people if not more?  Because I belong to their racing team.  A group of people who race together, train together and support each other through Obstacle Course Racing, running, life and everything inbetween.

Trying to rationalize my anger towards the events of 4/15/13 I kept missing something.  The human aspect I understood.  The anger at the media I understood.  The anger at the vulgarity of the perpetrators I understood.  What I couldn’t understand was why it affected me so personally beyond what every decent person felt.  It was more than why?  It was a how dare they!  And not at the audacity of the crime, which is unthinkable and unconscionable.  I was angry because I felt I am part of a community who is by its very fabric, tied to this event.  It didn’t just happen to someone else, it happened to the people I care about and while not there it happened to me.  Yes proximity plays a large role.  If this was Chicago or even New York I don’t think my polarizing anger would be so visceral.  But it didn’t.  It happened in my State.  My Capitol.  In my home.  Although I do not know one person injured, it happened to my neighbors.  It affected my friends.  It hurt my racing family, who are my very real family.

I am a runner.