BoldrDash is loved by many Rhode Island racers – and has been around and putting on solid, challenging events since 2010. One of the few events that started back then that is still around, and thriving – putting on a couple of races each year, and supplimenting them with training camps and programs – even adding Unleashed to their roster of facilities.

BoldrDash is also one of the amazing races we hand picked to be on our #racelocal Grand Prix, and for early 2014 you can race in the opens or elite divisions of the Grand Prix – right on the beaches of Rhode Island!

We (well, Corrine!) chatted with Lynn and got to know her, and her events a little better.

Check our featured reviews of the 2013 beach event and fall events!

The conception of BoldrDash was in 2010.  The company was actually formed in January of 2011.

What motivated you to start an obstacle course racing company?

I guess you could say the motivation for BoldrDash began in the back seat of my van.  (sounds a bit creepy’)  I am a trainer, and I back when OCR’s first came on the scene a friend that I trained happened upon this ‘thing’ called a Spartan Race in Amesburry MA.  It was 2010.  I was petrified, I had no idea what we were getting into but I knew it was time for something different.  So, I got about 50 people together and we trained in my backyard.  Outdoor bootcamps weren’t even all that popular back then, so just being outside and crawling around was a new and fun way to keep in shape.  After the race and before the bruises began to appear, we were driving home and couldn’t stop talking about what fun it was.  Not only was it an incredible day, but it was an incredible few months before the race training together and supporting each other.  This simply could not end there. We had to do this again.  But in true RI nature, traveling so far away from home was not an option.   People began talking about needing something like this closer to home (after all – we had to drive 1 1/2 hours, that’s practically an overnight trip for a Rhode Islander).  As discussions continued all heads seemed to turn to me. ‘You can do this,’ I kept hearing, ‘We’ll help.’

So with the help of so many fantastic friends and my wonderful family I agreed to take on the challenge.  I left my job, and began the build.  We were not only building obstacles.  Back in 2010 and 2011, we were building a foundation.  We were educating the public.  The OCR revolution had only just begun.

How many BoldrDash events have there been since you started? How have they grown?

The first BoldrDash Race was held on August 13, 2011.  There were 600 in attendance and about 589 of them didn’t have any idea what they were getting into.  ( I guess you could say, neither did I.) Mostly, there was an atmosphere that screamed FUN.  When the day ended, my husband scraped me up off the ground and took me and my three very tired children home.  It was a great day.  We created a cool event, we raised some money for the local schools.   As far as I was concerned it was the coolest thing ever!  Soon, the emails began.  People were sharing stories of their success and what the BoldrDash event meant to them.  I was humbled by so many of them.  Stories of success, stories of triumph.  Those participant emails and stories are what made BoldrDash come back.  The following year we had 1200 runners and more stories of success.  In 2013, our third straight year of bringing events to RI, we added our beach event.  This first time event brought in over 1200 people to the sandy shore of Westerly RI.  We felt privileged to be a part of the effort to ‘Bring Back the Beach’ after the devastation of Super Storm Sandy.  Also in year three we, of course, returned to Exeter.   This time over 2000 people shared in the fun.  We created a our first ever BoldrDash Kids, with 8-16 obstacles for kids 4-12.  A great way to spend the day with the whole family.

What can racers expect at BoldrDash?  (obstacles, party, sponsors)

BoldrDash is known for it’s customer service.  Before/during and after the race, race director, Lynn Hall is always accessible.  Safety is always our highest priority.  You can expect a minimum of 20 well thought out and well built obstacles, usually closer to 30 on a 5K course.  Some of our obstacles are the regular wall climbs, cargo net and wire crawls.  You can also expect to see things that you have never seen before.  Our creative juices are flowing constantly.  We have some great beach themed obstacles at the beach race and all the mud you could ask for at mud event in the fall.  Our after party differs from venue to venue.  Yawgoo Valley, Ski and Sport in the Fall is the source for all food and beer.  We have venders like REI, local Chiropractors, massage therapists, and physical therapists there for our runners with stretching stations and quick evals.  Last year we had free rock taping at both events for all runners.  Of course there is music and ALWAYS – BOULDERS!  We have our famous giant boulders that our racers LOVE to use to photograph themselves.  The beach race is different depending on State restrictions.  It is illegal in the State of RI to drink alcohol on the beach, so we try to work with the locals on that. 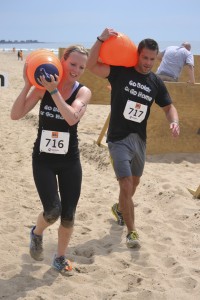 How long is the race distance and how challenging would you rate the terrain? Is the May Beach race longer or shorter than the September trail race?

Currently, we are a 5K race at both events.  However, that could change.  (no hints)  The terrain in Exeter is pretty rough.  We work with the hills at Yawgoo Valley to ensure proper quad burn by the end of the day.  The beach on the other hand needs no assistance.  Running in the sand is an obstacle in itself.

What are your plans for BoldrDash going forward?

We plan to grow our kids event in 2014.  We tested it out for the first time this fall and over 450 kids had a blast.  Making an impact on childhood health issues is definitely important to us. Sending the message, movement and exercise can be FUN to a child is a huge step toward a healthier living style in their future.  So we will definitely be looking at growing the kids event.   For adults, at this time we plan to stick to our current standing of one beach and one mud event for 2014. Growth is in our future, but planned and careful growth is what we are looking for.  It’s more about quality than quantity in our minds.

Where do you see the sport of Obstacle Course Racing going in the future?

That’s a tough question.  We are in the infancy of OCR’s.  There are new races popping up all over, some good, some need more time to perfect their craft.  There’s lot’s of talk about standardizing the industry.  I am on the fence on that one.  I think people love OCR’s because they are different.  If you standardize too much, you loose that individuality that the runners are looking for.  On the flip side some standardization could help ensure safety.  I love to see new races and new ideas, but over-saturation and over-growth are issues that have affected many OCR’s recently and it is sad to see some of them go.  I love the big guys, they offer a great experience with lots of showmanship.  However, the more local races, I think, are going to be what keep the big guys in business.  Not all runners can follow a large series around the globe,  but sticking close to home and developing yourself in the local OCR world, then taking on the challenge of a larger, longer race is where it’s at for many.