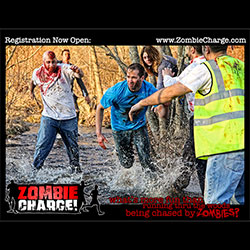 Tell me a little about your organization and it’s background. How big is the team behind the idea?

Zombie Charge is an event created by Rising Sun Productions. It is new 2013 and the premier event will be September 7, 2013 in New England, specifically North Stonington, CT (about 5 miles from Foxwoods). The next event is October 19 in Miami, FL and we are in the process of planning Houston TX in Nov and Baton Rouge in Dec for this year.
We have 4 founders. How we all met and know each other is a longer story, but a brief bio of each is as follows:

Jeff Rizer, The Director.
Jeff, 36, has been a commercial insurance producer for 18 years. He was born and raised in CT and now raising his family there. Jeff is an avid mountain biker, triathlete and runner. Jeff is incredibly active in community youth wellness and athletics.

Eric Anderson, The Professor.
Eric, 35, has been part of 9 start-ups. Currently he is the CEO of a disaster restoration company in RI and the Chief Happy Guy of a social enterprise t-shirt company based in Providence and production out of Boston. He is also an adjunct professor at Providence College and teaches entrepreneurship and business management. Born and raised in RI, Eric and his family now live in eastern CT. He is an avid triathlete and enjoys mud-runs.

Bill Horgan, The General.
Bill, 33, is the President and owner of a leading pest control company based in RI servicing lower New England. Bill is a RI native and now raising his family there. Bill is hooked on CrossFit and when you meet him it’s pretty obvious. His triceps are huge.

Jason Aminsharifi, The Doctor.
Jason, 31, is our MD. He graduated with his BS at age 19 and continued working in several careers including a large pharmaceutical company before attending University of Miami Miller School of Medicine. He graduated this year and is working on an antidote for those infected with the virus. He is a born and raised Floridian and continues to live in Miami.

What made you want to organize an Obstacle Course Race / Zombie Themed Event?

Jeff and I (Eric) train together for races.  It’s a simple story, we were talking one day in his office about upcoming races and what races we might do together in the upcoming summer as he commented he received “another mud run flyer” in the mail.  Jeff is the director of a 5k race for a local non-profit and knows how much work actually goes into it.  Knowing this I simply stated, “why don’t we start our own race series?”  He replied, “Yeah, how about a zombie run?”  Two weeks later our website was launched and registration was open!
Since then we have all become obsessed with all things zombie.  There is a tremendous cult following and it is growing.  I can see why now.  We all dream about zombies regularly.  But this is shaping our company culture and why we will be creating a truly amazing and authentic zombie race experience.  It’s going to be so much more than another mud-run or obstacle course.  From the moment you are parking your car, you will be immersed in the experience, in the post apocalypse, zombie-infested world.

Have you organized any other races, of any variety? If so, what have you offered?

Jeff is the only member that has been a race organizer before, that’s why he’s the director.  But Jeff and I have lots of race experience and friends who do also.  We know what works and what doesn’t.  Where to put our efforts and what is needed to make a kick-ass event.  Jeff’s organizing experience helps tremendously on all the back-end stuff that no one really thinks about.

Our goals for 2013 were originally just to have the New England race. Oh how things change so quickly.  We now have registration open for New England in September and for Miami in October. We will also be announcing Houston TX November and Baton Rouge December very soon! So for 2014 our goal is to have 10,000 participants between the 4 locations.

Tell us more Specifically about The Zombie Charge. How Does it Compare or Differ from other known themed Races like Run for Your Lives?

So if you haven’t realized just yet, there will be a few big differences.  We care about the entire experience, think about Universal Studios or a Hollywood movie set. We have an entire story that will be told – some before the event and some during.   We are going to make this experience authentic.  From the set, the course, and especially the zombies.  Our zombies will receive special training on how to “play the part” so the runners feel like they are in a real post apocalypse world.  Some will charge (chase) and others will walk or crawl.  Some even are trained.  Similar to other zombie runs, our runners wear a flag belt and have to try and survive with at least 1 flag. If they lose them all, they still have time to avoid being permanently infected, but they are on the clock! And at the finish line they will be required to visit the “infected”  decontamination area before joining the survivors.
Another big difference will be the venue selection and the obstacles.  We are working on securing some major sponsors, but in short our obstacles will be legit.  They will provide challenge, but more importantly will be fun…not lame like some others’ courses.

Tell us about the Zombies, Are We talking “Night of the Living Dead” or “28 Days Later”?

This is a great question.  There will be a mix, but have you seen Zombieland? Zombies are encouraged to come in costume and we will have professional make-up artists at the event with all the tools to make awesome zombies.  More than just blood splatter too!  In our story, once a person is bitten and become infected, they begin slow – think The Walking Dead. As they age and get more kills, their strength and speed increases and they become Chargers.  Chargers are faster than humans and don’t get tired.  They’re endurance is better than the best marathon runners.  Our course will have a mix of Walkers and Chargers – so come prepared!  We recommend running with a team and thinking about team survival strategies, protecting those with fewer flags or even using decoys and distraction techniques.  All zombies are sensitive to sounds too, so a blow horn or shouting will certainly draw their attention towards you!

www.ZombieCharge.com – watch soon – should be a new site released in about 10 days!
Facebook
www.facebook.com/zombiecharge
Twitter
@zombiecharge
Instagram
@zombiecharge
Remeber to use hashtag #zombiecharge
we will have an RSS feed and tumblr going shortly!

Where do you see the sport of Obstacle Course Racing going in the future?

Oh man, another great question we’ve thought and talked a lot about.  It’s not a fad or a craze. We are still on the upward slope of it’s popularity, the problem (or not) is each year company’s have to one up the previous year.  I think we are going to see some pretty insane obstacles. Think about the first few events Spartan Race or Tough Mudder had and their obstacles and look at them now?  But I think it will continue to grow in popularity and days of the typical 5k are going to be considered “boring”.  Maybe not for all, but for many.
I think many races are getting a little too expensive and we may see people getting priced out – so companies need to keep it realistic.  Some even pass the cost of insurance and registration fees on to the participant at the end of registration.
For Zombie Charge – we are going to make the course challenging enough for the hard core obstacle course runners but more than the challenge will be the overall fun experience, this will open the door to challengers at all levels.  Who knows, maybe we will have our own dusk or night-time zombie run before you know it!  Or maybe the ultimate zombie run for hard core competitors one day.
Many Thanks to Eric @ Zombie Charge for taking the time to answer our questions. Sounds to us like its going to be a very story driven immersive experience. Registration is currently Open for the September Event – Check out the Teaser video we pulled from the website www.zombiecharge.com below: