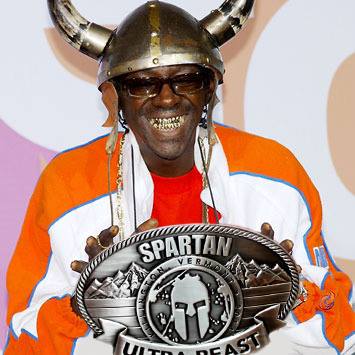 Personal rant time! I’ve seen many sides to the Ultra Beast belt buckle swag conversation – and wanted to share my own.

In 2012, I ran my first Beast distance Spartan Race. It was in VT (*The Beast*), and it was the biggest physical challenge I’d ever participated in.

I was staying with some folks who were running the Ultra Beast – two laps of the regular Beast course! TWO LAPS! Considering how I felt when I finished, I was in awe of their accomplishments.

Then, they came back to our rented lodge showing off their over sized, amazing looking medals. I wanted one. That night, we accidentally discovered THEY GLOWED IN THE F*CKING DARK!

I wanted one of those bad boys hard.

Within weeks I was registered for the 2013 Ultra Beast.

My training sucked. Injuries, lack of motivation, excuses – all those things got in my way, and as details of the 2013 Ultra were released I realized there was very little chance of me hitting the time cuts. I knew I could go the distance, I also knew I couldn’t go the distance in the speed required. My motivation was earning an amazing medal (and I needed it to complete my trifecta) – a DNF due to missing a time cut would mean I lost both those things. I dropped to the Beast, did the Sprint too, got my Beast medal and trifecta. I was comfortable with that.

A couple of days ago, Spartan HQ put out a photo of the new bling for the 2014 Ultra Beast. 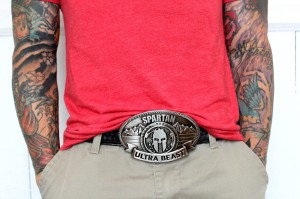 It’s a nice belt buckle, I’m sure. And they showed a photo of it strung on a ribbon, looking like a Flava Flav accessory. But it’s not the glow in the dark, oversized medal I’ve coveted for two years. It’s not the thing thats motivated me to push and drive. 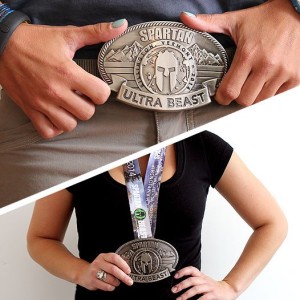 Much like the “old” trifecta medal – for many of us weekend warrior types (you know, the bulk of the field at any OCR) – the medal is a reminder that we did it. We overcame something. We achieved a thing. We earned a $2 piece of metal on some string. For me, I overcame the 300lb guy I used to be, long before OCR, and keep overcoming him, every time I run. For others, it’s achieving something they didn’t think they could do that day.

I was planning my first double trifecta year until they scrapped that physical reward of my accomplishment – the one I’d been anticipating for three, four years.

I have my medal collection hung up on the walls of my office, and I’m likely the only person who see’s them, day to day – but each one has a memory. Someone I ran with. A course time I was proud of. I can show you the first medal I received, ever. I can show you the first medal I received alongside my wife. I can show you the tag I got at HH16, and the dog tag at my personal best CMC pit. How about the medal the time my gall bladder attack turned a 10k course into a 6.5 hour slog? Or the one I rolled my ankle in the middle of and had to walk in? I have a medal that shouldn’t have existed, from a race that collapsed shortly after – someone took the time to find it, and get me one. Memories associated with them all.

Now – maybe I would never run the Ultra Beast. Maybe I could never overcome my own excuses and lack of motivation to get to that place. But, the oversized, glow in the dark medal would have been ever sweeter because if I ever did cross that finish line, and someone dropped that medal around my neck, I would have earned it.

No thanks. See you on the Beast course.

3 thoughts on “Of medals and belt buckles …”