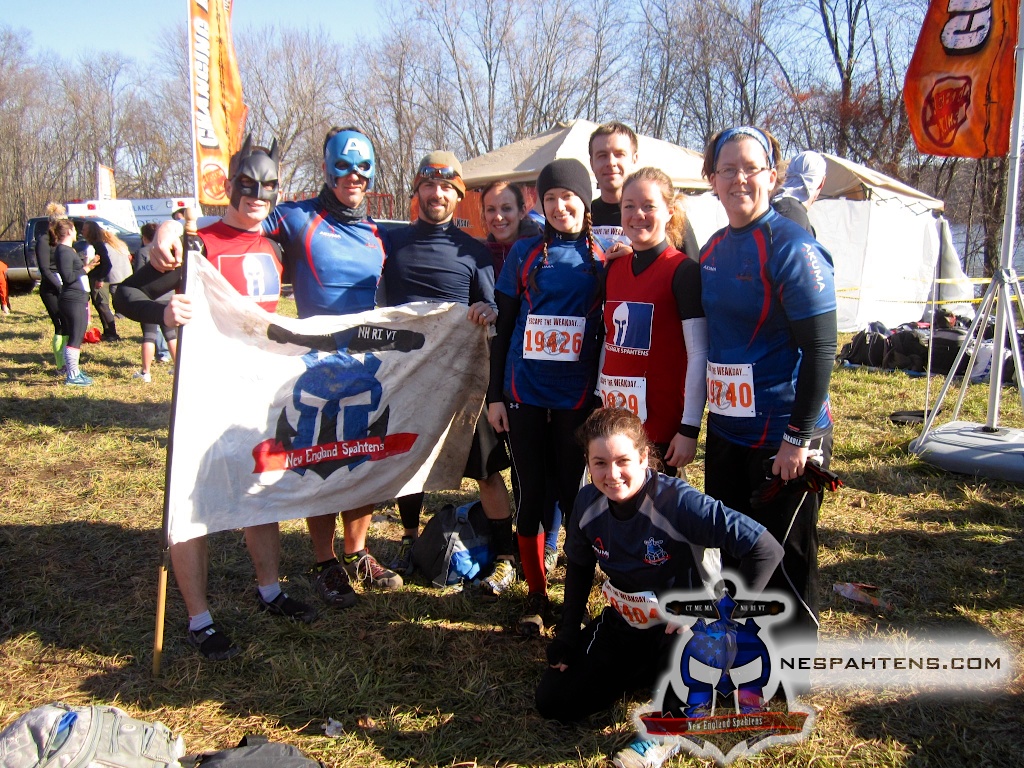 When I was in the Army I saw a t-shirt that said “Happiness is Fort Bliss in the rearview mirror.”  This statement pretty much covers my thoughts on the Rebel Race.

Rebel Race has a polished website and registration page.  They for all appearances look like a well organized race, worthy of the cost of the race and their place in the OCR community.  Putting an “S” on your chest does not make you Superman however.  Rebel Race registrations start at $50 and top out at $85 and about $20 more respectively if you choose to do the 15k version.  I’m not sure how many people raced this weekend but the only people who got their money’s worth were the folks at Rebel Race.

Every story needs a beginning so I will simply start mine at the parking lot.  Kimble Farm, an actual working farm in Haverhill, MA is located just above the Merrimack River.  Honestly you really couldn’t ask for a more scenic location.  When I arrived at 10am they had staff working the single file queue to get in and were collecting the now standard $10 parking fee.  I feel the parking must have been run by Kimble Farm staff, who host multiple events at this location, because these were the only organized people at the venue.  Parking was ample at this time and multiple staff members on hand were directing cars efficiently.

And then it all fell apart.  Changed and ready to go, this not being my first OCR, I headed to registration.  I had to make a registration transfer and couldn’t do it online so I went looking for an information tent.  I’m still looking for it.  However I met some NE Spahtens and jumped into the chaos which was the registration tents.  Like most things it wasn’t as bad as it appeared; it was about a 20 minute wait but people queued pleasantly.  Arriving at a nice volunteer she seemed to understand what I was needing to do.  However, I feel all she did was take my email print out and hand me the bib, t-shirt and rebel bag (which will become a Spartan training sandbag covered in duct tape).  At no point was I asked for a waiver.  I so should have gotten hurt!

The starting line.  Large start box, tight little timing line to go over.  A choke point and wait right at the beginning?  Not good.  The opening flat stretch is actually billed as 1 of the 26 obstacles: “Sergeants Sprint”.  Really, flat open ground is an obstacle?  So here is a list of other “obstacles”  which were marked with good, professionally done signage.  In no particular order:  Run Backwards, Fire Drill (roll on the ground for no apparent reason), Creepy creek (a muddy portion of a trail), Shuttle Run (run sideways), Drop and give me 10; Push-ups, leg lifts and some other exercise, Military Mud Pit;  Never even saw this one, Mystery???(yep still a mystery to all of us)  None of these had a volunteer directing you or even informing you that this was in fact an obstacle.  Just a small 2 foot by 16 inch sign.  Again a really great looking Kinkos sign.

So, those were the headscratching obstacles.  Next come the frustrating obstacles.  Slip and slide was easily a 20 minute wait to go down a slip and slide.  The cattle just queued up and waited.  NE Spahtens however were not waiting.  We cut across to the next obstacle but we’re Spartans so we burpee’d!  Some other racers joined us, and this is where Spahtens led the way.  The other racers who joined us just started knocking out burpees.  Eventually, one asked a Rebel volunteer how many they had to do.  The Rebel volunteer was clearly still suffering from the shock and awesomeness of NE Spahtens and had no answer.  At the end of mine I looked at the other racer and told her “You don’t have to do any, were just crazy.”  Clearly confused, she laughed but stopped and moved on.  She’s ready for Spartan Race she just doesn’t know it yet.  Another headscratcher was Prison Break, the single, 6 foot wide wall that was supposed to be covered in barbed wire causing you to go under.  Well, most of the very little barbed wire was missing so most people just stepped through the wall. On top of that was the verbiage which alluded to being cautious about the possibility of sodomy while doing the obstacle. Don’t drop the soap when you bend over. Really?  Is that necessary?

Now let’s take a look at the clearly dangerous obstacles.  Monkey bars. Broken crossmembers, missing hand holds, unstable construction.  Tyrolean traverse.  This one was clearly the worst out of them all.  First, there were four ropes of 5/8 inch diameter yellow polypro rope.  This is the cheapest line available.  It’s weak and has little tensile strength for endurance.  The traverse was about 30 feet and the line was raised about 11 feet above the ditch, which was a rocky ravine filled with large hay bales.  Not fluffy decorative hay ride bales but large dense feed bales.  They have about as much give as concrete.  Unfortunately while the NE Spahtens were waiting at this obstacle (which was also an unmanned water station with runners pouring their own water) not one but two people fell from this obstacle.  One was knocked out cold from the fall and the other had the rope catastrophically fail and collapse sending him to the ground and then to the Emergency Room with what appeared to be a fractured wrist.  We like racing and personally, I have an aversion to hospitals, so this ended up being the 2nd “skipped” obstacle.

So you might ask was there anything good at Rebel Race?  Yes, the venue.  A rolling farm with lots of hills really good for a cross-country run.  The weather.  The NE Spahtens to run with.  Obstacles?  They had a well done spider web.  Thoughtfully designed and constructed.  Solidly fastened to the trees to endure thousands of runners without collapsing.  Under and Over pipes in a small water filled ditch.  That water was cold and you really did have to get fully submerged.  Drain pipe crawl, simple and not very exciting, but fun.  And last, an uphill tire field to high step.  The last little stretch to the finish line had obstacles no more than 10 feet in length that were designed and constructed by a local Cub Scout troop.  The fire pit to jump over was smaller then the holiday fires I light in my fireplace.  Finally, the finish line was another unstaffed area that had our “dog-tag” survivor key chain.  If it wasn’t for other NE Spahtens who had finished before us (one of whom who took 1st place over all) we wouldn’t have even known they were there.  They were unceremoniously tossed on a table between the bananas and the water and still in their factory shipped plastic bags.

Rebel Race ran 3 races in 2011:  New York, DC and Indiana.  In 2012 they list 10 races, all sold out.  But as of this writing, the last 2 races in 2012 are coming soon.  I see nothing for 2013.  Their races start around $50 and tap out at $85 for the 5k and $70 to $105 for the 15k which is simply 3 laps of the 5k.  Without insight into the company, its organization, or how it’s run, I have to give this race a solid 2 out of 10.  I wouldn’t recommend this as an intro to Obstacle Course Racing because to do so may turn people away from other races of quality.  For return on investment, it’s a 0.  For swag, I give it a 1.  For organization at the festival area, it’s a 5?  Their web presence would lead you to believe they are a large professionally run organization.  Their product does not.  Rebel Race does not belong in the same arena with TM, Spartan Race, or even Warrior Dash.  They charge the same amount as other events and nowhere near deliver.  If they dropped their price point to max out at $35, invested a little more in the quality of the obstacles that they did do well, don’t advertise natural course features as obstacles, and dropped the body weight exercises entirely they might recover and become a worthwhile race.  Not an Obstacle Course Race but an adventure, mud, fun run.

If you’re reading this, this is why NE Spahtens was formed.  Anything, no matter how bad, can be fun as long as you’re with good friends.  I got to meet up with old Spahtens and new Spahtens.  Some I have raced and trained with and some I have only met online.  We will continue to run races and review them as openly and honestly as possible.  We will do this to ensure that everyone has an opportunity to salvage a great time even from a bad race.

0 thoughts on “Rebel Race in the Rearview”