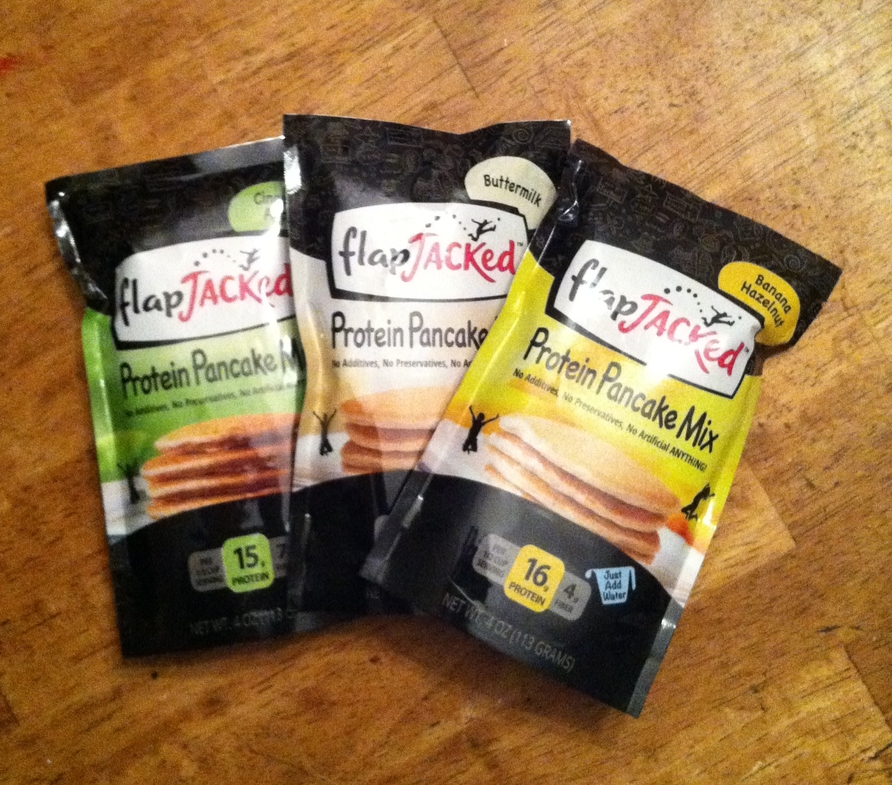 When you’re training for just about anything that has to do with physical activity, I know for me, you are trying to get protein any way you can. Protein IS just about anywhere, from meats, fish, edamame, plants and everywhere in between. But, what about our favorite “cheat foods”?

I love having breakfast, and frequently, my family makes it for dinner. Loading up on pancakes that late in the day though can lead to an excess of carbs when there is no plan to burn em off anytime soon. So how is it possible to get more protein and less carbs? I have seen tons upon tons of recipes for “protein pancakes” but was always iffy on it, and didn’t want to screw up the families meal with some cockamamie recipe that tasted like junk, and again, was loaded full of carbs.

I saw an ad on Facebook about FlapJacked, a prepackaged protein pancake product  (that was my shortened version of the V speech) and started doing some digging. Here is what I found out about FlapJacked.

While the sodium level seems high, it’s comparable to Bisquick at roughly 390 mg so not going to nit pick on that. They also contain whole oats and quinoa flour. This is where they sold me. FlapJacked are free of any artificial dyes and flavoring, contain no preservatives and absolutely no GMO ingredients!! For my family and I, that is of major importance!

I reached out to them and a few days later there was a package in the mailbox and plans were made to throw down some pancakes.

These are simple as simple can be, just add water. I do think a little less could have been used, as the mix seemed more watery than I would have liked. I did let the mix sit as recommended, but still, they seemed loose. That said, after they were all cooked up it was time to sink my teeth into some pancakes. There was a variety of flavors from basic buttermilk, banana hazelnut and apple cinnamon. I tried each one without syrup and with syrup.

There were all great. Fluffy and soft they absorbed the syrup well and were packed full of flavor. Being a huge hazelnut coffee drinker I had high hopes for the banana hazelnut ones and they were fantastic. My boys, Colin in particular, were partial to the apple cinnamon. The buttermilk pancake, the one with no added flavor, was great as well. Overall, I was extremely pleased with FlapJacked and will most certainly keep an eye out for these in the grocery store, and if not, will gladly order them!

You don’t just have to make pancakes with this mix, they have tons of recipes on their website for things such as muffin tops, etc. Besides the product, I really love the company storyline and where they came from in wanting to make this product. It’s worth a read, so check out their website at http://www.flapjacked.com and try out some FlapJacked, you won’t be disappointed.