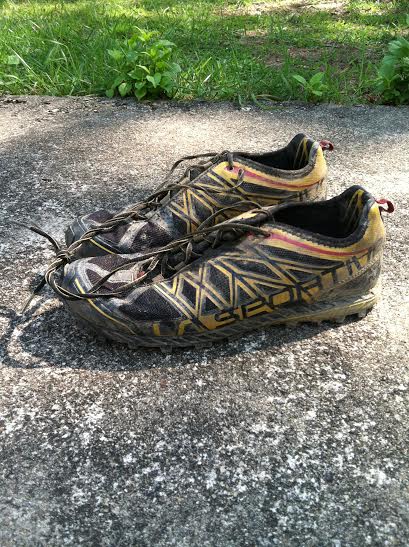 I’m about to burst your bubble….

Did you know that there were others shoes for OCR besides Inov-8 and Reebok? 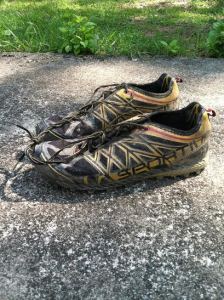 Some of them are cleverly disguised as, wait for it, mountain running shoes.

Yeah, I know there are a few more, but the aforementioned companies seem to be the most recognizable, and more of the go to OCR shoes than say, the La Sportiva Anakonda, which I am about to introduce you too.

I had read tons of reviews on a variety of mountain running shoes and of course saw Inov-8, Salomon and other names, but I hadn’t heard of La Sportiva and their name kept popping up. After much research I wanted to test out the Anakonda as they sounded like they would transition perfectly to OCR. A fair amount of mountain/ trail runs are wet, muddy, etc so why not right? 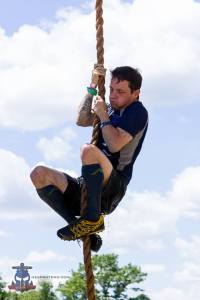 I got them in the mail and was pumped, they were black and, my favorite running sneaker color, yellow! Yeah, that has no bearing on anything but I like it so… pfft!

I started checking them out and they seemed pretty diesel, I figured they’d weigh a ton, yet as I got them out of the box I was surprised at their weight. They only weigh in at 10oz, which again, was a shock because these things are built and the lugs on bottom are serious business.

Speaking of lugs, and the outer sole, it’s made from La Sportiva’s own material which they call FriXion XF. It’s a sticky, very grippy product. At the races I’ve used them in, some of the walls that were slippery and other folks were struggling with, I was able to get right over with great grip. It also helped quite a bit with rope climbing, that’s not to say I got up each one, but that’s not the shoes fault… I like the design of the lugs, they are not just squares or triangles. They are rounded, kind of like a crescent shape, and seem to really dig into mud and dirt. 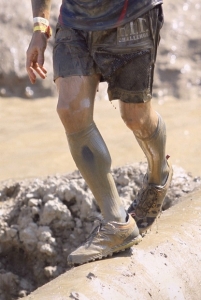 I prefer running in minimal shoes, and until these, I had run solely (not a pun) in Vibrams. At 4mm of a drop, these are still considered minimal as that’s barely a fraction of a drop, but they add just enough to give your foot a bit more support. At least I found that they felt a bit natural with that tiny bit of additional drop. In the front of the foot there is an insert to protect from rocks and roots, which I never felt in any of the races I ran with these.

The tongue is gusseted so it keeps out most of the dirt and pebbles that you might get in the rolling mud obstacle, or running in a stream. Speaking of mud… With mud comes water and the Anakonda do a great job shedding that water.

One thing that threw me for a loop before wearing them the first time was the extremely rigid heel cup. I thought for sure it would make things uncomfortable. It did not. Once laced up the fit is tight enough there is no rub on the heel, which was my concern.

At this point, these shoes have taken me through a full Spartan Trifecta and a Superhero Scramble. They have seen time on trails by my house and then some. I’ve asked a lot of these shoes and they continue to give and give. They have many more races in them and show no major signs of wear. They wash off great and look like new each time.

Ladies, these do not come in your sizes. That said, Leah tested out a model for women called the Bushido. They are designed just like the Anakonda and are just as phenomenal. Not only has she used them for races, trail runs and more but has worn them out and about for long periods of time and hasn’t had even the slightest amount of discomfort. She agrees with me on the grip, the water shedding and just about everything I said above.

Like the shoes mentioned at the beginning of this review, these are not cheap. But then again, you get what you pay for. One of the most important elements in running an OCR is having a shoe that you can rely on. I have relied on these many times now and they have yet to fail me.