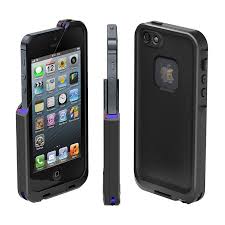 Don’t have a GoPro and looking for a cost effective alternative? Matt Parker sent in this great lil review for an iPhone case that does just that! Thanks, Matt!

The LifeProof fre case for the iPhone 5 is a great option for those of us who want to take pictures or videos during an OCR, but don’t want to spend the big bucks on a GoPro (or similar device).I’ve had a LifeProof case for about a year and mainly used it to keep my phone dry while running (road races).  After taking a few trips for Spartan Races, I was looking for something I could bring withe me on course to take pictures.  I gave the LifeProof case a shot while at the Hawaii Trifecta weekend.  I was able to take awesome photos and videos and never had an issue with water, mud, or dirt getting to my phone.  The fre case has a built in screen protector that works well and doesn’t have too much glare.Overall its a great (and cheaper) alternative to a GoPro.The only downside is that there is no connector for a wriststrap or lanyard to hang the phone.  You either have to hold it or put it in your pocket / pack.Rating: 5 star (amazing)