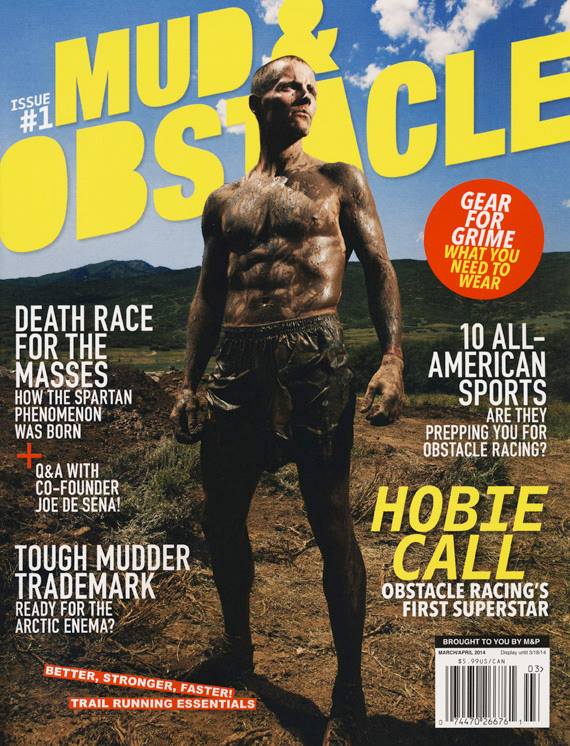 By the time this review is posted, the first issue of Mud And Obstacle Magazine should be on the stands. That said, I wanted to give a review of the copy I received.

Published by Active Interest Magazine, the publishers for great magazines such as Black Belt, MuscleMag, The Box and a plethora of others ranging the gamut from rock climbing, equine sports and more. With that type of history you could only hope it would be great and they would treat the sport respectively. That is exactly what they have done.

By now you’ve seen the cover to your right. Gracing that cover is none other than Hobie Call, to many, the face of Obstacle Racing. While he has emerged as the sports most well-known athlete, as of this moment though there are myriads of other OCR heroes, both men and women, to look up to and admire. That aside, the article about Hobie is written well and if you didn’t know a bunch about him before, you will know enough to know he is one of the most dangerous guys in the game. He’s not going to whip out a shiv and shank you behind the showers after your heat, but dangerous in the way that he can, and will, push himself to get to the end before you. He has, and will for some time, be the man to beat.

Mud And Obstacle does a great job mentioning as many of the OCR’s out there, but mostly the big guys are written about. It’s my hope that as the magazine gains some traction that they maybe reach out to some of the smaller races and feature them. We all know, as Spahtens, that there are a ton just in our area alone. If you’re listening, Mud And Obstacle, check out our race review section and see what races your magazine is missing. Hell, drop me an e-mail at nate@nespahtens.com and I’d be glad to put you in contact with whomever you like as far as our scene here goes!

Aside from interviews with the Spartan Race founders there are articles on gear, training and more. So far it’s not to ad heavy, which is nice as there was more content to read and less stuff to flip through to get to the good stuff. Coming from a print background I can appreciate the quality of the paper, the layout is clean and easy on the eyes. All in all, it’s a great package!

You can subscribe and save a bit, or head to your local Barnes and Noble to pick up a copy. For those that head up to Shale Hill, Rob will be selling copies as well. TEASER: Look for a Spahten in the issue, you will see at least the one that I saw!