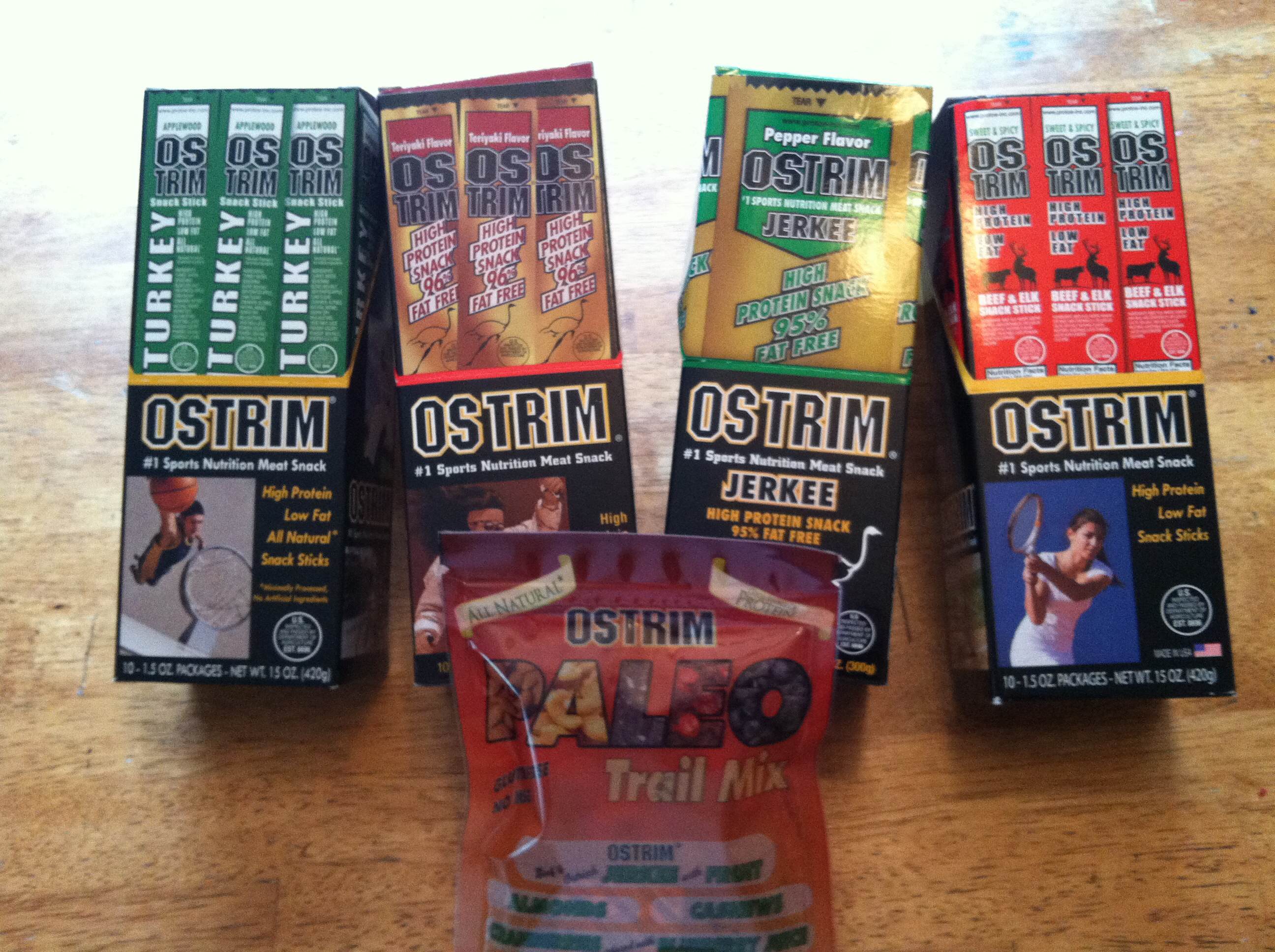 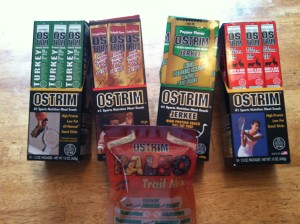 Continuing on with my “foods on the go” review series… Ok, ok, so it’s not so much a series but it sounded good as this product is definitely for those on the move.

Ostrim graciously sent me some samples to test and review for the Spahten community. No disrespect, but non-meat eaters beware, this review is full of it. From beef and elk meatsticks to beef and ostrich jerky, it’s all about the meat! There is something in store for the herbivores though, review coming soon on that! 🙂

Let’s touch on the Paleo Trail Mix first. The mix is chock full of beef & ostrich jerkee, almonds, cashews,  and cranberries infused with blueberry juice. It is gluten free and contains no MSG. While the pouch does have one of those packets to help keep things moist, I honestly think with the jerkee and berries it stays quite moist and actually kills some of the crisp bite that cashews normally would have – they were quite soft. That aside, I don’t think I can ever eat trail mix again without jerkee in it, EVER!

Before we get into the “meaty” part of the review, I know by now you are wondering what is up with the whole ostrich thing. Believe me, I was just as confused. The last thing I think of when I see an ostrich, which isn’t often just so you know, is that they don’t look too appetizing. But, after reading up a bit on why they were used I see and understand the benefits. Per the Ostrim FAQ:

Q. Why is ostrich meat used in OSTRIM? A. The naturally-raised (no antibiotics or stimulants) ostrich meat in OSTRIM is one of nature’s best sources of high-protein, low-fat meat. OSTRIM is a USDA inspected health and wellness food that tastes great. In fact, many top athletes, nutritionists, personal trainers and dietitians recommend OSTRIM as a natural source of low-fat meat protein.

Does it taste like chicken? I dunno! Mixed with beef and the spices they use for various flavors there is nothing to differentiate between what is ostrich and what is not. I can say this though, after reading the labels and researching their website, if you are on a low-fat/ high protein diet this stuff is perfect! The carb count is extremely low as well. So, maybe that’s kind of like chicken, right?!

I’m a spicy kind of guy, so my favorite were of course the Pepper Jerkee and Sweet & Spicy meatstick. The texture of the jerkee was great. Not hard and tough, but chewy and moist, you could tear right into it. I don’t have anything bad to say about any of the flavors really. The beef & ostrich also had an original flavor and bbq, which was smoky and really yummy.

Ostrim included some of their newest product, the beef and elk mix meat-stick, which is where my favorite, the sweet & spicy, came from. The beef & elk also come in a teriyaki flavor which is awesome.

Although I said I had nothing bad to say about anything, I was not completely sold on the texture of the turkey meatstick. The flavor was there, but for some reason it seemed more chewy than the others. Which is fine, because all the others were off the chart yummy.

If you are into jerkee or loved chomping down on some sodium and preservative laden Slim Jims as a kid, Ostrim is a MUCH better choice. Not only is it tasty and not including the junk I just mentioned, but it is healthy for you. It’s packed with protein, low in fat. It’s just good for you, plain and simple. While the jerkee is delish and all, it’s not as filling as the meatsticks are. That said, it is a fair assumption that Ostrim is the ultimate snack on the go, for carnivores of course!