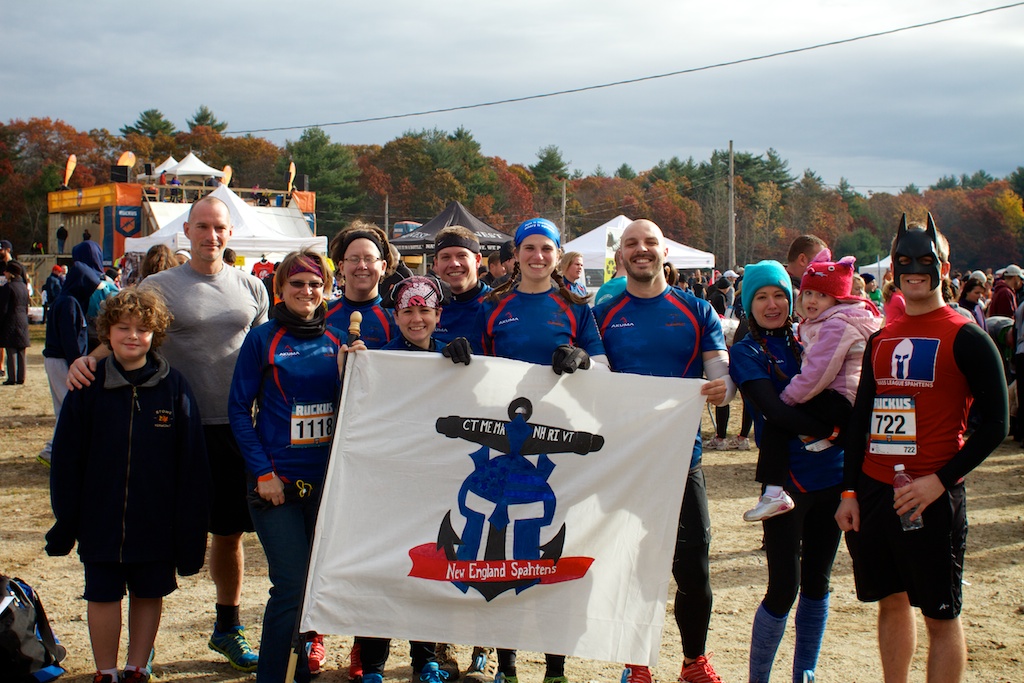 This wasn’t my first Ruckus, but it was my first Fall Ruckus.  Ruckus is what got me into Obstacle Course Racing back in June 2011, so it holds a special place in my heart.  I keep going back because the organizers always do such a great job with this event!

Several Spahtens were in attendance.  I believe we numbered 18 in total.  I bumped into some Spahtens who were running earlier heats as well as the motley crew that was running at 11 – myself included.

If you’ve not run a Ruckus before (first of all, why not?  DO IT! Sign up for the Spring one in Boston like…now!), there isn’t a whole lot of production before your heat takes off.  You are called to the corral about 10 minutes before your heat and then a simple air horn blow sends you on your way.   We were off and it wasn’t long before we were given some obstacles to break up the crowd.  Here’s how it went down (I know a couple of things are missing).

2 – Normandy Walls.  Nobody does this obstacle correctly.  I wish there was a volunteer here to explain.  The idea is to step in the middle of the cross beam and go over.  Ideally you have your hands behind your head when doing so, but I usually don’t just in case I trip or something and need to break my fall.  You do not just hop over the whole thing folks – remember this for next time J

6 – Short Walls
After this series of obstacles the crowds thinned out.  And we headed towards the woods for a little quality time amongst the leaves, rocks, and roots.  It was mostly flat, but with a few hills to climb and descend.  Then more obstacles:

7 – Down and Outs. Climb a large mound of dirt and go down the other side into some lovely muddy water, repeat 3 times or so.  The water might have been a little chilly too, but my feet warmed up in no time as we hit the trail again for a bit.

8 – Water crossing.  There were some “holes” to avoid but we all made it across unscathed.

9 – Muddy Trail Pits.  I always think of The Princess Bride and the Fire Swamp when I hit this section of any OCR.  Thankfully this one wasn’t as bad as some others I’ve experienced and I didn’t witness anyone lose a shoe or anything.  The trail happened to be lined by thorn adorned plants so staying toward the edges was not the best solution.

10 – Cargo Net Bear Crawl.  We left the woods again and had to bear crawl under a cargo net.  This was a bit of a bottleneck – I’m not really sure why – but I waited my turn and scooted through.

11 – Reverse Slant Walls.  Jump up and climb on top, then slide down the other side.  A plank is conveniently placed high enough so you can utilize it, but you have to jump to get there.  Even with a bum hand, this one wasn’t so bad.  I do like that the plank was upgraded from the lower cross beam support from 2 seasons ago.  It adds to the challenge!

12 – Mini Cargo Climb.  A cargo net hung about 3 feet off the ground by a wire strung between two trees.  Traverse the net and get to the other side.  This was a new obstacle.  It was a little tricky, but not tough, and it was a nice preview to what was in store.

13 – Lobster Traps.  A tunnel of sorts which require crawling through.  You can’t avoid getting on your knees and then always end up at a mud pit!  I like these ones.

14 – Sand Dunes.  Run through a sand pile complete with paths.

15 – Bear Climb.  A wooden structure you essentially bear crawl over the top of and then down the other side.  I haven’t mastered the transition from going over the top to going down the far side.  A lot of people just walk over the top, but the volunteer told us to crawl.

16 – Tire Pile.  Climb over the pile of tires.  It’s about foot placement and balance.  I actually saw someone skip this and internally (ok, and maybe verbally too!)  I was like “WHY!?”

17 – Cargo Net.  This is always my favorite obstacle.  I love the climb, the going over the top, and the decent.  There’s something empowering about getting yourself to the top of a tall place and then back down again.  This net is tighter strung than some other races I have done and I’m totally ok with that.  Also the tower is constructed from big thick wooden posts rather than metal tubing.

18 – Tall Walls.  These walls had rope with knots and foot holds about halfway up the wall.  Waiting on the other side is a platform so you don’t break an ankle or anything hopping down.

19 – Tire Pile (inside a container).  Same idea as before, just you have more to hold on to allowing for more steadying as you make your way through.

21 – Ranger Bars.  Scoot up to one platform and then across the end.  I saw this for the first time back in Spring and had to skip it this time as I’m still nursing a broken hand and it wouldn’t have been in my best interest.  Pretty simple idea, not always simple to execute!

23 – Mount Ruckmore! It starts with a Tall Wall with 2 footholds, so it’s a little taller  than what was previously done.  You arrive at the platform and then are greeted with another cargo net climb.  Once at the top, you have another horizontal cargo net to traverse.  Slide to the hay and book it to the finish line!

There were no Gorilla Bars this time around, or Air Loops.  I was a little sad and yet relieved, since I knew it wouldn’t be smart for me to attempt either of them.  I think a lot of people were glad to see there wasn’t a lot of uncomfortable muddiness at the end as it was a bit chilly and windy for this race.

Bag Check was a little interesting.  It was a leave at your own risk situation.  This was great because you could just get at your stuff if you needed to, but it also was a little worrisome being that I had money, a cell phone, and car keys in my bag.  I really didn’t have another option – as I had nowhere to put my keys otherwise – so I opted to have some trust for the multitude of strangers that were around.

The options for food were limited, but good.  B.Good was there with veggie burgers and all-beef burgers.  I had a burger, and it was delicious!

The festival area is always improving and it is totally spectator friendly.  We were constantly going in and out of being really close to the festival area while on the course.  There were at least 6 obstacles where spectators had an awesome view – Ranger Bars, Cargo Net Climb, Mount Ruckmore!

I’m definitely excited to see what the race in June will throw at us.