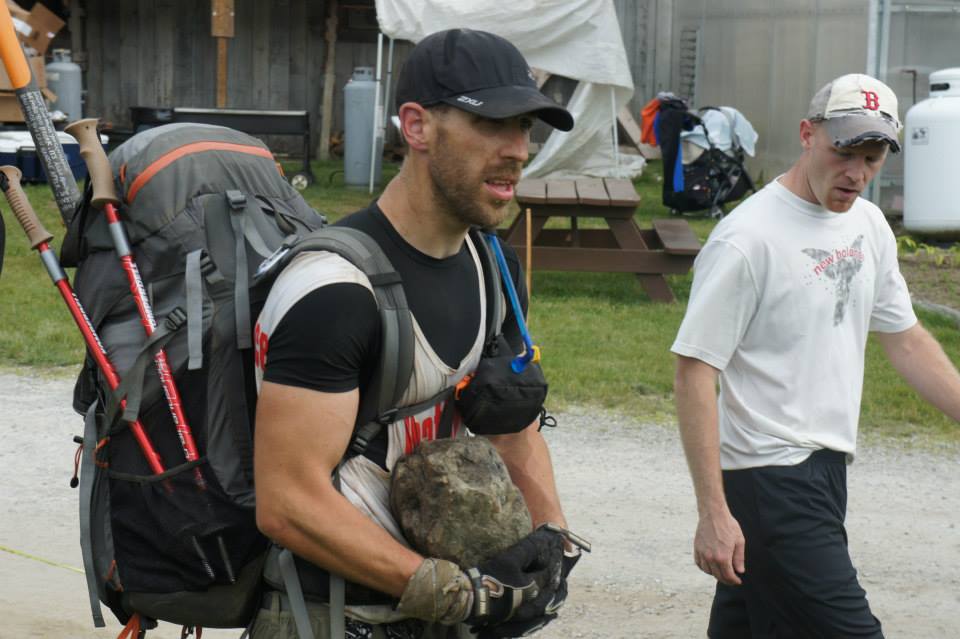 Sean Meehan was one of the small group of Death Race finishers – and shared his experience … Thank you Sean, and congratulations!

We’re over a week removed from this race and I’m still broken.  Most of my wounds have healed, my toes are starting to regrow their missing skin, and I can finally put shoes on for more than the hobble into work.  The looks and questions I get from my coworkers are priceless.  Trying to explain to someone that you completed a race lasting 72 hours is like trying to explain the desert to an Eskimo; they have no frame of reference.  I’m sitting here and writing this as a Death Race finisher, an official skull holder and I should feel elated but I don’t.  It could simply be that I have a case of the post-race blues, though I honestly suspect it’s not. I built myself to complete this race; this race that never felt like a race to me.  I never raced, I just moved along, never really pushing myself.  I’m left disappointed and baffled by what happened.  Does this mean that I got nothing out of Death Race; no certainly not.  It raised so many questions in me: What the hell was the point, why did I do this, could I have pushed harder, why didn’t I push harder, where do I go from here?  Trying to figure out what the point of the race is like trying to grasp the meaning of life.  Maybe the point of the race is to gain insight into whom you are, maybe it’s to build memories, or it could be simply to survive for the duration of the event.  It’s probably something different for everyone.  I know for me it was all of those.

Death Race stripped away all of my pretenses; my true character was shown, both my strengths and weaknesses.  I was left exposed; a nerve ending awakened in the emptiness of space, being poked and prodded by events past.  My defects are the things Death Race nightmares are made of, they’ve filled many of my nights since the conclusion of events in Pittsfield Vermont.  I learned that I’m not as altruistic as I believed I was.  I found that I’m willing to cut corners, specifically if I believe that the end justifies the means.  When given and easier, softer way I’ll take it, every time, all the time.  Strengths of character had the light of Death Race shown upon them as well.  I only once waivered in my determination to complete the race, it was a brief moment and passed as soon as it occurred.  I proved to myself that when my mind is set on completion of a task that I will complete the task.  My will endures regardless of the hopelessness of it all.  I never once got angry during the race.  Even when a miscommunication cost me about two hours of rest time, added about six miles to my day, and forced me to miss my opportunity for real food.  I truly grasped the acceptance of the moment and what was needed in that moment.  I found myself at peace emotionally and spiritually under the duress of the physical pain I was forcing my body through.  These character defects and strengths were brought to light by the extreme nature of the event and I’m grateful and humbled for this.

I understand why people return year after year to destroy themselves, it’s the people.  The greatest thing about the Death Race is the people that are a part of it.  The people make the race.  It starts with Joe and Andy, the race directors, and flows all the way down to the volunteers and racers.  Even the people of this small town are a part of what makes this event so special.  The greatest moments for me had to do with the people I was surrounded by.  The people and moments like this: running into James Horgan at the Pittsfield General Store prior to heading to registration both of us anxious about our “strategy” to show up towards the end of registration; my crew member Robert Lee sneaking up on Joe’s Mountain at night to give me and some other racers peanut butter and jelly sandwiches; every time when I saw Joshua Gustin Grant at challenges, giving me about as much encouragement as a volunteer could give; hiking Bloodroot with Keith Glass, Jane Coffey, and James sharing hallucinations and laughs; walking back to Peter Borden’s house with Jesse Howes, Jesse encouraging me to keep moving and ignoring my moment of doubt; the time I spent with James Fiore, Michelle Lomelino, Mark Sahley trying to fill in the “mud pit” at Peter’s; when Andi Hardy gave Patrick Mies II and I a ride across Joe’s property to our crew and car after our last check-in; lining up together, the remaining racers, all of us in our “tuxedos’  awaiting our fate inside the “Riverside Casino”; the hundreds of  smiles from Sandy Rhee and Amy Lillis.  These people, these memories, the emotions associated with them, this is what it’s about.  That’s what makes all the pain and suffering involved in this race worth it.

With all those great people involved, the memories made, and the self-insight gleamed, why then do I have such an uneasy feeling about my journey.  It’s simply that I could have pushed harder.  I could have worked harder laying the stones for the stairs.  I could have done better burpees, more pull-ups, hiked faster.  I could’ve run.  It amazes me that I never once felt the urge or need to run. Running is a part of my life, a part of my being.  Every move I made was contingent on an idea that I may have to do this forever and I need to be prepared to do so.  I conserved my energy not because I was “playing the game” but because I was afraid. Nothing is forever, not even Death Race.  I let my fear dictate my pace.  So I never pushed myself.  The idea of completing the race was more important to me than putting forth a strong effort and a good showing.  I went into Death Race with the belief that I wanted to find my limits, to push them.  I did no such thing.  Yes, I understand that completing Death Race in and of itself is an amazing undertaking, but it doesn’t feel complete for me.  I almost didn’t get my skull.  If I had pushed just a little harder, if I increased my effort just a little bit; then my finish would have never been in doubt.  A part of me feels that I was gifted a skull and that I didn’t truly earn it.  It was as if this skull became mine because there were enough skulls at the end of the day when those that truly finished Death Race had received theirs.  Then there’s the other side of that coin.  I wasn’t gifted this skull it was mine and I just needed to speak up, to prove I was worthy.  In the end I was willing to go to any length to get what I felt I deserved.  Even when it was over, and the chips were cashed in; my “never say die” attitude got me this skull.  Maybe the reason for this unease in my stomach is that I’m unsure of which of those is the truth.  I’m fairly certain I’ll never know and maybe that’s the rub.  Yeah, the box next to finish Death Race on the bucket list has a check in it, but it doesn’t feel complete.  I don’t feel I pushed my limits, at least not like I had intended to.

So this leaves me with one last question: will I return?  The answer is I don’t know.  I guess I’ll have to ponder whether I really have some unfinished business in the Green Mountains or not.  Right now I’m not even sure if the juice is worth the squeeze.  However, I do know that if my wife has her way I’ll never be back.  Honestly, at this moment there are other things on my radar and for today I’m ok with that.  My focus had been so intent, for so long, on finishing this race it’s going to be nice to explore some other things.