Editors note: You’ve seen em at races sporting the Team Mike McNeil logo, you’ve heard the name and you’ve probably met one, two or all of them. Maybe, you have no idea who they are and what they are up to. Team Mike McNeil have been our Spahten brethren since day one and I am proud to give the mic to Mr. Mike Hastie to tell their story. Why he’s speaking in third person I have no idea… lol! 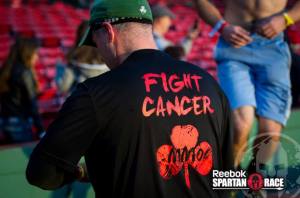 Turn the clock back to early 2012… Mike Hastie is about a year into his newly found fitness journey, but is becoming bored with the daily gym routine.  Longtime friend and fraternity brother Scott Houghtaling suggests he try a Spartan Race.  Mike has never run a race of any kind before, but figures it sounds like fun and will be a good test to see if all the time in the gym is paying off.  Mike recruits Mark Gearin, also a newly formed fitness fanatic, and the trio runs the 2012 Amesbury Spartan Sprint together.  Instant obsession occurs.  Did someone say Kool-Aid?

We immediately go looking for the next race.  We find the inaugural running of the Fenway Spartan Sprint (then called the Time Trial) only a few months away, but the $100 price tag has us wavering.  Scotty says “What if we ask the Mike McNeil Organization guys if they’ll cover our entry, and in turn we’ll raise some money for them?”  Brilliant.  Mike approaches the MMO with the proposition.  “How much are the entry fees?” they ask.  “$300 total” Mike replies.  “Go for it” they say.  “How much do you want us to raise?”  “If you raise $301, we’ll be happy”.   And just like that, Team Mike McNeil was born.  (By the way, we raised over $7,000 by race day).

2+ years and who knows how many races later, and here we are.  We’ve raised over $20,000 for cancer research.  We’ve been featured on Spartan Race promo videos and regional news casts, and we’re only getting started.  Our black & red team shirts can be seen at nearly every New England area race as we run alongside our New England Spahten brothers and sisters.  We are so humbled by the support and generosity of the NES community, we even added the NES logo to the sleeve of our team shirts. 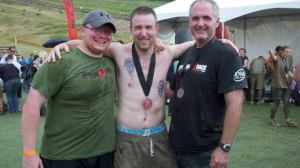 So that’s who we are…but who is Mike McNeil?  “Mikey”, as he was affectionately known, was a dear friend and fraternity brother of ours.  At the young age of 11, Mikey was diagnosed with Pheochromocytoma, a rare form of cancer that affects the adrenal gland system.  Countless surgeries and chemotherapy took quite a toll on Mikey, but he didn’t go down without a fight.  This awful disease attacked Mikey’s body for 16 years, and on March 9th, 2009 it finally got the best of him.  He was 27.

Mikey was a warrior.  Even though he knew his days were numbered, you’d be hard-pressed to find him without a smile on his face.  He lived his life to the fullest, and had as much fun as he could before he left us.  He personified the “never quit” attitude, fighting to beat cancer time and time again, only to have it come back with a vengeance.  Not a day goes by that we don’t think of him, and we use his battle and his courage as a wind at our back as we make our way up every hill and over every wall.  We’re always looking for more ways to raise money for the fight against cancer. His fight is now our fight, and we will never quit. 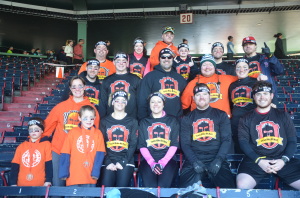 To stay up-to-date on all things Team Mike McNeil, please “like” and “follow” us on our Facebook page – https://www.facebook.com/TeamMikeMcNeil
For more information on the Mike McNeil Organization, please visit https://mikemcneil.org/