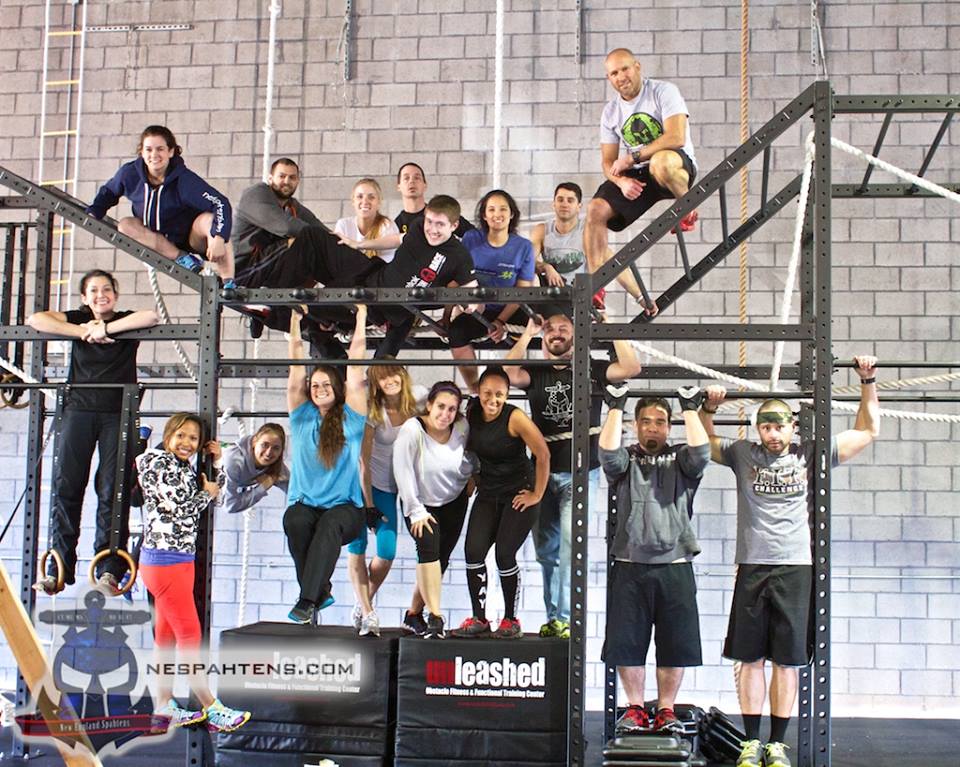 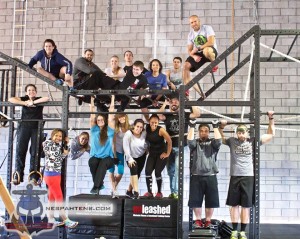 Yesterday a group of Spahtens hit the road from various locations to hit Unleashed in Warwick, RI. Unleashed is a unique facility that focuses on Obstacle Fitness & Functional Training. They are the largest indoor training facility of it’s kind in the New England region. They offered to put together a special day for us Spahtens to train and play at their awesome gym. This date was set up as an alternative to running Rebel Race, which is not only a horrible event but they actually cancelled this particular date as it got closer. We’d like to think that maybe, just maybe, we were able to open a few people’s eyes as to the danger they would be getting themselves into by running such an event due to their sordid past.

Paul graciously picked me up for this trip and was anxious to spread some new Spahten love, winter hats. He also brought his camera gear to shoot the session, all photos used here are one’s he took.

We walked in and it was quite a spectacle. There were walls, there was a masochistic looking contraption, otherwise known as a saw tooth monkey bar rig. It had a cargo net on one side, rings for ring dips on the other. They managed to squeeze in a weight hoist in two different spots, and had a traverse rope extended the length of it. I can’t remember all of it, but this thing was the real deal!! This was going to be intense, I got the same butterfly feeling of nerves and excitement I get before a race.

A couple of the local race’s were present to see how it went down, including Tuff Scramblers, BoldrDash and F.I.T. Challenge. A couple vendors even showed up to teach about their products and fuel the team. They were Core Power and Go Nuts, Co. Thanks to you all for coming out and networking! 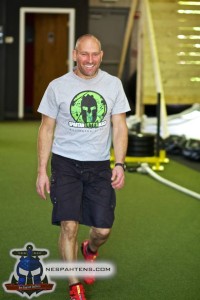 Our instructor for the day, Kevin, laid out the plan. There were 18 different obstacle stations, we were to be rotated in and out of each one after a couple to few minutes. Before that though, we needed to warm up. He took us out for a quick run to a playground where we ran a bit, climbed some little barriers, did burpees, etc. We sprinted back to Unleashed and it was go time.

Forgive me from the jump here, I am not going to remember all of the obstacles and in which order they were run, but I will do my best to get to each one and my experience with them. AND, as you will see, this is rather long-winded. I wanted to make sure you, the reader, truly understood how awesome this place is though!

RUNNING: Of course the first station I was given was more running. I had to run around the building, up and down a short grade, as many times as I could until time passed. Nothing major to see here, it was just running, move along folks.

WALL TRAVERSE: The evil geniuses at Unleashed did not set this particular obstacle up themselves, but worked with what they had. Behind the facility was a large brick/ stone wall. You basically had to work your way across is. Plain and simple.

BARBWIRE CRAWL: Next came the “barbwire” crawl. This is pretty cut and dry if you’ve ever done an OCR, every race has a variant of this. Due to obvious insurance reason, Unleashed did not have barbed wire, but string. It was still effective as you had to remain under it the whole time. I did this back and forth a few times, rolling on way, crawling the other. After the run and crawls, my legs were already starting to burn, fantastic! 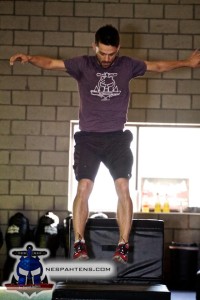 LEAPING BOX JUMPS: I was a bit daunted at first with these, not by the short one’s but by the tall one in the middle. You basically had to jump from one box to the other. You were allowed to jump up on one, then down to the ground after, but my goal was to box jump from box to box. They were setup so the first was lower, maybe 12″, the middle was higher and could have been 24″, and the third was another low one. I blew myself away at how I was able to stay off the ground after each circuit through. And I thought my legs were burning before this, yeah right, they were downright fried after this exercise.

STANDING/ UPRIGHT SLED PULL: Not 100% on the weight, but it looked like there were three plates on the sled and I am not sure on the distance but guessing the sled was about 80-100ft away from the pull spot. Not much else to say except you grab the dang rope, pull that sled toward you, push it back and start over. The suck was starting to set in! 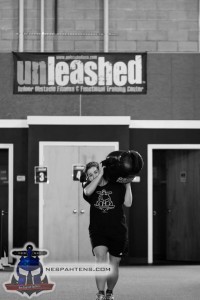 BUDDY CARRY: Fairly simple task, grab a bag shaped similar in shape and weight to a small human and carry it back and forth a 100ft or so. Before each sprint out, do some squats. Sprint, squat, sprint, squat…

BACK SLED PULL: Just like the standing/ upright sled pull except your are laying down on your back pulling the rope. This movement is to simulate rope climbing and you can really feel it. I believe this sled had the same weight as the other. After destroying my legs, the upper body was gasping for a reprieve at this point, and we were just getting warmed up…

6 & 8 FOOT WALL CLIMBS: We’ve all seen this, and depending on your skill level, you either hate them or love them. I love the 6 footer, it’s just a hop and over, it’s great. But, being vertically challenged, getting over the 8 footer has been the bane of my existence. As Dikembe Mutombo says, not today, not in my house!! I sized up that damn wall, hit it and over I went. I got to hit it three times and knocked it out three times!! Yay me!!

10 FOOT WALL CLIMB w/ ROPE: Grab the line, repel yourself over, repel back down. There it is. You’ve seen em, you’ve climbed em. It’s all about refinement, get it done and find a way that works best!! 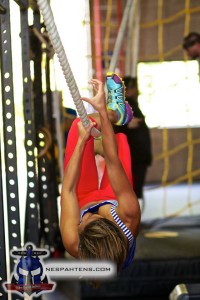 ROPE TRAVERSE: I have yet to deal with this obstacle and was dreading it a bit. I had overheard Kevin coaching someone else about a technique and I tried it. Basically you grab on, get your feet on the rope and basically walk your feet along, not drag them. My upper body was toast so I couldn’t make it the whole length, but I definitely feel comfortable learning Kevin’s technique and if I face a traverse rope again, I am confident I can complete it.

KETTLE-BELL HOIST: This was probably the simplest task of the day, the kettle-bell was not that heavy. But, it was all about refining technique, so I was able to try a few things that worked for me and should work well for future races.

CARGO NET: Another simple task, climb up the net and back down. For those feeling adventurous, present company accounted for, you could climb the next and then bear crawl over the saw tooth monkey bars to the other side and then climb down. I did this a couple times then time was up. 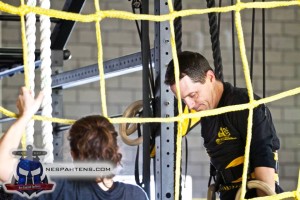 RING DIPS: They had some regular rings or you could try out this ring contraption that had a belt on it. Basically you used you own body weight to leverage yourself up. I would love to play on this some more when I am not completely burnt out. I used to love the rings as a kid and wanted to even learn gymnastics just because of the rings. But alas… here I am.. lol

LADDER CLIMB: The next couple obstacles are cut and dry. This was a dangling rope ladder, you climb up, you climb down. I found as I got about half way up I was swaying a bit from side to side, almost to a spin. Maybe I was wobbling because of the fact I was burnt the heck out. Either way, it was fun and taxing on the body. 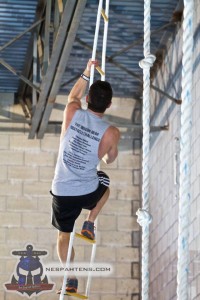 ROPE CLIMB: Although I said the next couple are cut and dry, the ropes were nice because they were not all the same size and type. A couple of them were larger, one knotted, and were those white, almost waxy, ropes. There’s not much grip on those, at least not to me. They had two others that were a bit thinner and made more of a rough style rope, which was perfect. Kevin gave me the leg brake technique, something I had yet to learn. I still have to work on it, seemed like it pulled too much on my knee. Next time I will get this down! 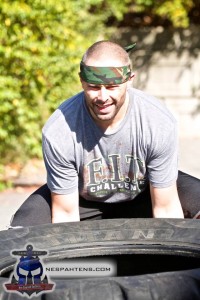 TIRE FLIP: I always have enough gas left to flip me some tires!! Not sure the weight but the course of action was to flip it 10 times down and then ten times back. I thought I would be completely spent by this time, but I kept it going and grabbed onto that knobby sob and flipped away!!

BAG MOTION SQUAT: Aaaand finally we get to the last task, at least on my circuit from where I had started. You squat down, grab a weighted bag, squat back up, curl it into your chest and start banging out squats until time was up. This took everything I had left, and my quads are TOAST today!!

After a brief intermission, chit chat session the gym was ours to work on [articular obstacles we felt we needed some help on. Then, after that, Kevin offered to take those that wanted to, out for an hour long trail run.

So now you know why YOU NEED to check out Unleashed. Besides the fact the facility is spot on, the way they charge their members is great too. Rather than your pricey CrossFit gym where you get charged whether you go twice in a month or thirty days, here you can purchase a non expiring punch card and drop in when you want. Their trainers are top notch and do not talk down to you. They are there to help and I see this business model being a huge success. I already can’t wait to go again… Did I say plans may be in the works for another outing? HMM??