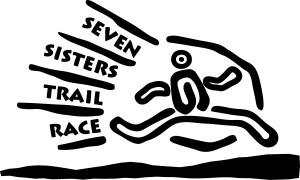 * Event Details
Location: Route 116 (Military Rd) at the Notch, Amherst, MA
Website: 7sisterstrailrace.com
Pricing: $40 before April 24, $60 after.
Parking: Onsite at the beach and FREE!!! .
Course: 12 miles – 6 out and 6 back. There is a time cut off to reach the ½ way point – this year it was 11:30 am.
Check in: My friend picked up my bib, but is sounded easy and straight forward.
Bag Check: None – there was no need.
Wash Station: None – again, no need.
Changing station: None – no need.
Bathrooms: Port-a-potties – there were a good number, I did not have issues.
Vendors: The race is sponsored by La Sportiva – and they had an awesome tent set up.
Schwag: None – this is a very simple race and there was no need – you can buy some logoed things onsite/online.
Post- race nutrition: None that I knew of – you got a bottle of water when you finished and a sport bar in your registration bag.
Beer: None
Volunteers: I love the volunteers at this race – they were great at the turn around – friendly, and plenty to handle the number of racers.

* Race Details
The course
Distance: Approximately 12 miles.
Terrain: Brutal is the best way to describe it, especially if you are not used to super technical trails which require more than just trail running – this is named the “hardest trail race in New England” by Runners World – and it did not disappoint.
Course marking: Very well marked – the public trail is marked with white paint – in addition, the RD had marked the trail very effectively with bright pink ribbon.
Water Stations: Every 2 miles – but there was an opportunity here (see below)
Difficulty: Very hard – while, with time, the average hiker could enjoy themselves on this trail, the time hack makes it more challenging. Be prepared for climbing, yes climbing up rocks, embankments, etc…. there is some running down hills but very little flat easy space to run. The majority – 95% of the trail, is technical with roots, rocks and other obstacles.
Obstacles: Just nature itself – it’s a trail race folks – remember not paved, easy, packed trail – you are running through the woods and up and over anything that would naturally be in your path!

Overall Review:
This is a great trail race and one that I would consider “Above Average” – just know what you are getting into and what to expect – It was better organized and executed than many road/trail races I have been too.

The successes: This is a great, local race which has gained a national reputation – gotta love that – a local group that came together back in 1991 to run it and has continued ever since – the same RD is still in charge! It is simplicty at its best – show up, get bib, run, finish, meet up with your friends offsite to recount the day. The turn around, was not just water, it was Gatorade, oranges, bananas, Cliff Bars and gels, and other snacks. At the finish you got a bottle of water – that was great. The venue is beautiful if you are a trail runner, this is a must do. While there was a good number of people the waves were effectively divided and the start was clean and well run.

The Opportunities: Not many… I am a sucker for a cool tech shirt for the race – especially when it’s one of those difficult check off my bucket list things – even if it’s a pay separate option for a year/event specific one, that would have been nice. **Note – there were shirts available from previous years and some cool hats if you are into that. The water stations were the biggest opportunitty – all of them ran out of water – something that should never happen. They had much needed ice as well (for cramps not drinks) which was awesome but ran out as well. For me this is one of those things that should not happed, can be a safety issue and leaves a bad taste in people’s mouths.

* Event Details
Parking was free and easy. Plenty of porta-potties. Swag included a simple drawstring backpack, a chia bar, and a few flyers. They had hats, t-shirts, and books on sale.
The aid station at the turnaround had plenty of water, Gatorade, gels, fruit, cookies, and the other two unmanned water stations were plentiful when I went through.

* Race Details
What do you do the day after running 3 laps of an obstacle course race located on the beach, covering approximately 12 miles? Why you go “run” the 7 Sisters Trail Race of course!

Billed as the “Hardest Up/Down Race” by Runners World Magazine on their America’s Best Trail Races list. With a cutoff time of 12:00 for the turnaround. Whelp, make that 11:30! Apparently I missed the posts on their Facebook page about the change in cutoff. What was already going to be a challenge, I had been freaking out for days about now making the cutoff, and I just lost 30 minutes, was now something I seriously thought I would DNF.

I arrived early with plenty of time to register, use the bathroom, and do what I really love to do: visit with people! I knew quite a few people running, several who had come out just to spectate the start, and it was a fantastic way to spend the morning. It wasn’t long before we were lining up, I missed the group photo, and we were off. It is a matter of yards before the trail takes a turn and we are going UP. The ups and the downs are no joke.

Up we go. Photo courtesy of Heather Gannoe
www.relentlessforwardcommotion.com
It was hot. I was sunburned from the day before. I had a plan to drink every time my Runkeeper spoke to me which was every 15 minutes and every mile. This worked well. I would eat something every 1-2 times she spoke to me and ingest a salt tab every hour or so. I never bonked. I never stopped sweating. Despite my legs feeling brutalized, I never actually felt bad.

Top of the first section of the ascent after the cutoff. I MADE THE CUTOFF!!!
I was really worried about making the cutoff. Luckily for me, despite saying 11:30, they seemed to have adjusted the cutoff to be 2:30 hours from the time your wave started. I made it, with mere minutes to spare. I had just enough time to get some fruit, refill my pack, rinse my hands, and get back on the course. I never got a photo of the view from the Summit House but it was beautiful. The volunteer at the top told me if I hurried, I should catch a pair of females who were just ahead of me. That running together keeps you motivated. So I moved, as fast as I could. I finally caught up to them!

Heidi, Marie, and Cat. What amazing people. I had a great time with them. Heidi was struggling, so I did what I do best. I figured out where she was hurting, helped get her moving, rubbed out her butt, and got her to smile. Marie was moving slowly as she had rolled her ankle, bad enough to slow her down but not so bad she didn’t make the cutoff! Cat was amazing. Turns out we have mutual friends. After staying with them for quite a while, I had to keep moving as my legs were wanting to tighten up. I could hear them off and on and when I came in to the last aid station, signaling we had two miles to go, I was able to see them come in. Heidi, despite her pain, was adamant that she was going to finish. I had to hug her before moving on again.

The LAST tiny bit of downhill before rounding the corner to the finish!
Luckily they took off not much later and we were able to semi stay together the rest of the race. Coming down the last hill together and seeing the finish line. We all dug deep and gave everything we had left to give. My friends cheering at the finish and willing to hug my sweaty nasty self was amazing. Thank you all for the support. I cannot wait for next year.

Recovery #chocolatemilk with my 7 Sisters hat. That pattern? That’s the elevation!