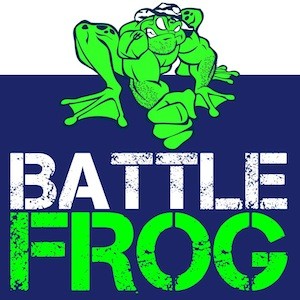 * Event Details
The parking into and out of the location was relatively easy.  The parking and the event was on the same grounds so no busing was needed which was nice but it was a lengthy walk to the festival area.  The festival area map was incorrect which made for a frustrating time trying to find the showers after the race.  The registration process was quick and we were given our packets and numbers without much delay.
Battlefrog did have several vendors and a couple food trucks on site.  I looked through the merchandise tent after the race and was a little discouraged by the limited selection of sizes in the shirt I liked.
After finishing the race we were handed a very cool medal.  There were also several flavors of KillCliff bars and KillCliff recovery drinks to choose from (none of the flavors I tried I particularly enjoyed), along with some bananas.
The free cotton t-shirt was given out at another tent.  The women’s shirts with the v-neck are being fazed out and I was given a standard mens shirt which in all honesty probably won’t be worn.
The baggage check area I felt could have been managed much better.  You are given a bag check band with your number, you placed this around your bag, and handed it to one of the volunteers.  There was no rhyme or reason to where they put the bag and when you went to pick up your bags you had to walk around the tent with the volunteer looking for your bag.  The numbers were too small to read and they did not have a system for say putting all the bags #1-#1000 in this area, #1001-#2000 in this area, etc.  I did appreciate the fact that they did not limit the size of the bag I could take in.

* Race Details
Let me start by saying this was my first Battlefrog event and I had heard several good things about the race so I was anxious to get a taste of this new series.  The event was at Rock on Adventure in central Florida.  The location of the race could have been better.  While there was plenty of land to run around the property consisted of pretty much nothing but cow pastures.  Cow pastures covered in cow manure.  We did nothing but dodge mounds of cow droppings throughout 5-6 miles of the 9.6 mile course.  The other time was spent running through the black swampy water of Florida.  I have no problem with the black swampy water, it is Florida, so this was to be expected.
The real reason for writing my review is to express my concern for the safety of the racers at the BF event.  There were several obstacles which I felt were very unsafe and life threatening.  The fear was from falling from great heights on to nothing but ground underneath.  I understand the point of some of the obstacles is to challenge your fear of heights but the reality is that during a climb there was a great potential to loose your grip and fall.  One such obstacle was the 60 degree, which consisted of horizontal metal pipes about 3′ apart that you had to climb.  The challenge was this entire structure was angled at 60 degrees and you climbed it like an inverted wall with your feet essential out in front of you and your body leaning backwards.  Any slip would land you on your back.  Another unsafe obstacle was the caving ladder.  This ladder was partially suspended over a water pit, which is fine.  The safety concern arose about 5′ from the end of the climb where the lad
der extended back over the ground and the dismounting portion not close enough to water.  The water pit could also be extended to make this safer or have a bell that needed to be rung before dropping in the water.  My biggest concern was one of the obstacles near the finish.  I’m not sure if it was called O3 or tip of the spear.  Basically it was climbing a telephone pole up to a large rope.  This rope was anchored at the top and at another point 20-30′ from the bottom of the pole, essentially make a guide rope at an angle.  Transitioning from the pole to the rope was a scary situation and once your hands were on the rope you were left with one of two options – let your feet hang and use nothing put grip strength to get down (mind you to do this you need to hold your body weight with one hand while you move the other) or wrap your feet around the rope to help support your weight.  You are now suspended over the ground with no way to cushion a fall.  Again this was at the end
of the race where fatigue has set in, the possibly of cramping, or just sweat has left grip strength on the brink of disaster and disability.  This obstacle truly needs to be eliminated or redesigned with safety in mind.  BF claims that safety of their racers, spectators, staff, and volunteers is paramount.  I just did not see or feel it.