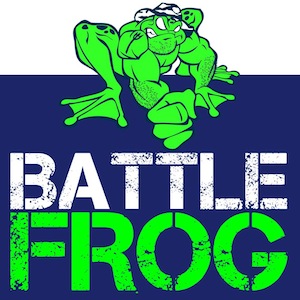 * Event Details
Parking was fine. Plenty of space. A little disappointed with the lack of vendors however. Not a bunch of schwag either. I love to get auto stickers to show my accomplishments, but not for BattleFrog I guess. Showers afterwards were a let down too. After standing line after racing for about 20 minutes ,we get to our turn and the water runs out. Then they could not reconnect and so we ended up driving home (a 4 hour drive mind you) muddy and dirty.

* Race Details
Loved the course! Right amount of difficulty for a fairly new OCR-er and her teenage daughter. Loved the mud, water and trail running. Could have been more supervision. Saw too many times people cutting through the course to shave time or skip obstacles. Only hurts themselves and their experience yes, but also skews our finish as well. Would love to do it again, and happy to see we have one coming closer to us next year!

* Event Details
BattleFrog Tri-State was held at Old Bridge Township Raceway Park, a location for motocross and race car driving. I think the venue was great for BattleFrog. It was easy in and out and there was tons of parking on site. This was BattleFrog’s first year, and I would guess they got around 1,000 or so attendees over the course of the day. If the event gets bigger, it would be possible that traffic could be an issue, but for now it worked great. On site parking is always a big plus in my book.

I arrived, paid my $10 for parking, and easily located a spot. I followed the sound of noise towards the festival grounds, about a five minute walk from where I had parked. Registration was a snap! I show my ID and I was in. BattleFrog had no wavers to fill out and had not per-assigned bib numbers. Also convenient was that my bib, chip for timing, and pins were all in an envelope, pre-arranged. What a simple and wonderful idea! Why has no one done this before.

The NE Spahtens had ended up being the biggest team at BattleFrog Tri-State, which meant that we got a free team tent and some beer tickets. I made the first order of business locating the team tent. This was pretty easy to do as the festival area was not massive. That being said, the festival area was well-appointed and had some national sponsor. I didn’t spend a lot of time wandering around but I saw a merchandise tent, some tents for national sponsors, and lots of areas offering fun for the family — a paintball range, an inflatable for the kids, and a pull-up challenge. Basically all of the things you’d see at a major event. They also had all the basics that the racers would need like a place to hose down, changing tents, and t-shirt pick-up. As an exciting bonus, there was also a helicopter that you could win a ride in and Navy SEAL demonstrations.

The finishers medal was cool and super heavy. I was coated in mud so the volunteer gave me mind still in the plastic bag, which was great. They had green ribbons for the 5K and blue for the 15K. I have to give BattleFrog props for the finishers T’s. They did men and women’s t-shirts. Other than Ragnar this has never happened. I absolutely love my t-shirt and will wear it all the time. It actually fits me!

* Race Details
At around 10:15 a.m. I headed over to the starting line with a few other Spahtens. BattleFrog offers a 15K and 5K option, as well as 10K races for high-schoolers and a 5K for youths. I was scheduled to run the 15K, a little over nine miles, and was excited to see the 47 obstacles that were promised.

We had to ascent a ladder wall to get into the starting coral. This was a nice change up from the normal 6′ walls that you do at most races. As always, there was an announcer to get us pumped up and started off. I’m not a huge fan of starting line speeches and always think they go on for way to long (the speeches at Tough Mudder are especially intolerably long). I was relieve to have this speech be very short — think two or three minutes. There was then a release of green smoke and a loud cannon fire (too loud!) and we were off.

The BattleFrog course definitely lived up to the hype and was A+ in my book. I ended up running the course by myself which let me go at the pace I wanted to. I jogged most of it with some little bits of walking. Most people were walking at some point along the course. I always made sure to walk through the very muddy sections because I didn’t want to twist an ankle. I ran the course it 3:20 and with a smile most of the way. I haven’t run by myself in ages and, while I definitely prefer running with teammates, running by yourself now and again is good too.

The course was very obstacle heavy with 47 obstacles in total. These are all serious obstacle too; not just series of mud pit that you don’t notice that all of a sudden counted as five obstacles. You knew when you were doing a BattleFrog obstacle. Also, all of the obstacles had signage that told you of a service person that the obstacle was in honor of; a very nice touch.

Before I go into discussing all the obstacles I want to make a few comments about the course. It had been raining all night and until right about when we started racing. The course was soaked. This ended up being a good thing because the mud-level was to the max. There were lots of extremely muddy pieces to the course, especially along the motocross course and in the woods. I ended up with more mud in my shoes than I ever have, and that mud stuck with me the entire course. My shoes weighted about double for the entire run through. Plus, I had mud wedged between the bottom and insoles of my shoes. Something to consider for next time because running around with so much mud in your shoes is a lumpy and heavy experience.

The course was not hilly — with the exception of going up and down some very short hills on the motocross course it was entirely flat. After doing a lot of mountain climbing OCRs I found it nice to be able to run/jog most of the course.

BattleFrog took full advantage of the venue and had us use all of the motocross field and track. We also did a lot of the course through the woods around the venue, crossing rivers and taking advantage of a large pond that is at the track. There was a lot of weaving around to get in the full nine miles, and I found this to be part of the fun. It was great seeing parts of the course that you had already visited and feel how far you’d come. Having the balance of course time out on the track and time in the wood divided things up nicely and kept me very engaged.

The one minus that I have for the course is the odd spacing of water stations. I had planned to bring my hydration pack, but saw that they had five water stations over the course. This ended up being true, but the spacing of the stations ended up being kind of odd. There was a water station at around mile 1.5 but then no water for almost four miles. There were then a cluster of water stops around the end. The first water stop and the fourth had mini larabars as snacks, which was very nice. My complaint though is the spacing of the water stations between miles 1.5 and 5 — that’s a long time to go without water on a course that I bet took most people around three hours. So you’re talking over an hour without water. It kind of messed up my nutrition strategy. It was also surprising to find no porta-potties on the course. For a course this long I would tend to expect them and would hope they might add them for next year.

I also noticed that the course was a little volunteer “lite”. There weren’t volunteers at all the obstacles and some of the water stations were unmanned. I also didn’t see any medics on the course. There were volunteers in a cart that seemed to wander around the course, which is good. I am sure in their inaugural event BattleFrog might have found it a bit challenging to find volunteers. I’m hoping they’ll be able to round up a few more for next time. It would be good to have some more for safety sake. The more challenging obstacles were definitely more heavily staffed and there were divers and life guards at all of the water obstacles.

The star of the course were the obstacles. They were top-notch, well-built, and well thought out. Obstacles were placed in a smart way — kind of like at Shale Hill. For example, you were forced to do a lot of upper body focused obstacles all in a row, adding to the difficulty factor. The penalty for not clearing an obstacle was ten 8-count Man Makers (basically a burpee where you jack your legs in and out after the push-up but while still in plank).

Here are the obstacles, with descriptions as best I remember. I took some pictures, where they existed, from the BattleFrog website to give you an idea. As usual, the course map doesn’t 100% match my recollection for the order of the obstacles, but I’ll follow the map for simplicity sake.

To sum it up, BattleFrog definitely lived up to the hype. It was an obstacle course race in the truest sense focusing on obstacles over running. You could hardly go more than two minutes without hitting an obstacle, and the obstacles were amazing. BattleFrog is planning to have a 2015 New England race, and I plan to be there.