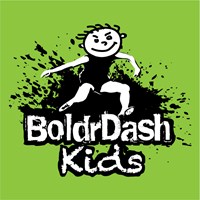 * Event Details
BoldrDash Kids in the Mud took place at Yawgoo Valley Water Park in Exeter RI., in collaboration with the water park. While you could do just the race if you wanted, the primary deal was a package: one hour at the water park, followed by a lunch (each person registered got a lunch ticket for a hamburger, a bag of chips, and a small pink lemonade), and then the race itself. I went with my sister, and we had four kids between us, my daughter (6), my son (4), my nephew (11), and my niece (7). The races were divided into family waves where parents participate (1-1.5miles long), a younger kid race (age 3-8, 0.5 to 0.75 miles long), where parents accompany the kids for safety but do not do the obstacles themselves, and the older kids wave (9-13 years, same course as the family wave).

Parking was supposed to cost $5 per car, but when we arrived, no one asked us to pay, so we didn’t. Pre-race information stated that the water park/lunch would take place at the bottom of the hill, while the race would take place at the top, so we would have to drive 2 minutes up the hill another parking lot to the race start. When we arrived, however, the race organizers had worked that out, so no car moving was necessary–the Start line was at the bottom of the hill near the water park, as was the Finish, and the course itself was on the slopes of the hill.

Lunch consisted of a lunch ticket for each participant good for a hamburger, chips, and lemonade from the park’s concessions. I think it would have been better to get a $5 voucher or something, as none of the kids wanted that, so we brought food for them ourselves, while I used one of the tickets for myself. I didn’t get a chance to look at their menu, but I think there were other options available.

The festival area was pretty small, consisting of a tent selling BoldrDash T-shirts of all varieties, some foam “boulders” for the kids to heft for photo ops, and for a while there was a large “checkers” board, etc. There was also a “Go Army” tent (recruit them while they’re young, I guess…). In any event, we did not spend much time at the “festival”, but it was enough for the kids to be occupied for the few minutes after lunch and before the race start.

Porta-potties were available but unnecessary–everyone just used the water park’s facilities instead. I think they were originally intended to be placed at the top of the hill for the race, but
when the start/finish were moved to the bottom they become superfluous.

Volunteers were friendly and there were a lot of them throughout the course.

Each racer got a race bib, a (kid-sized) medal, with a small chain to attach it to a backpack (good idea!), and a good quality T-shirt printed on front and back, which was made of thicker material than any other race T-shirt I’ve gotten. T-shirts were provided at registration, so the kids could wear the T-shirts for the race.

* Race Details
The race itself was laid back, which you would expect for a kids race. Things were chaotic as you would expect with lots of kids, and everyone seemed to accept that and go with the flow. A general observation: I had watched several BoldrDash Kids videos on youtube ahead of time to get an idea of what to expect, and also to show to the kids to get them psyched up. The actual race that the course seemed much longer than I anticipated. All the kids who finished were very tired, and the youngest kids (like my 4-year-old son) probably couldn’t have done it without being carried through at least part of the race.

The younger kids race started, and up the hill we went, my daughter (6) and niece (7) racing ahead, while my son (4) valiantly tried to keep up, but stumbled on the slopes in the midst of the crowd. He was okay, but I ended up carrying him for most of the race. At choice obstacles my son asked that I put him down so he could attempt it. First was a plastic pipe to crawl through, which everyone did easily. Next was the mud pit, which my nephew (11) did, but the other kids bypassed. Next was a “spiderweb” of ropes blocking a path the kids needed to negotiate. Here is where disaster happened: my niece (7), tripped over one of the last ropes and landed badly on her elbow. The ground was just dirt, but she might have hit a rock or a root, or just landed badly. She is normally pretty tough, but she started crying and it got worse with time. My sister led her to the nearest volunteer (the spiderweb was perhaps the only obstacle I saw without a volunteer present), who directed he
r to the medical staff. My niece wanted her medal, so she went down the hill on her own, declining the medical golf cart, and by the end of the day was smiling and proud of her paramedic provided sling and ice pack. She’s now ok but just with a bump and bruises.

Back to the racers. My kids negotiated the A-frame ladder and bypassed the potato-sack hop, because as my daughter said “it would be too slow”. Uphill again, and now my daughter was asking me to carry her because her legs were tired. I exhorted her to continue, as I knew we weren’t even halfway done with the race, and I wasn’t looking forward to carrying both kids the rest of the race (together they’re about 95 pounds, so I guess it would be good practice).

We reached the top of the hill where there were over-under-through walls, and a rock carry (far too much for the youngest kids, but fine for the older ones). At this point my nephew (11), starting ten minutes behind us, caught up to us. We started back downhill, and at a water station the path forked–the family/older kids wave went one direction and through more obstacles, while the younger kids went straight on downhill. As I went with my two kids and my nephew split off to do the older kids part, I did not see that part of the race. Suffice it to say, it kept him busy for a while, and he ended up finishing at least ten minutes after us, hot, sweaty, tired, and happy.

I continued downhill with my two kids, over two more short walls that my daughter managed to negotiate just fine, and then down the final slope to the finish. Finish line in sight, my son “wanted to win”, so he demanded I put him down and he sprinted through the finish line, beating out my daughter.

We waited for my nephew to finish and met up with my sister and niece, who was now doing okay, her arm in a sling. Everyone was tired so when my nephew finished we packed up and headed home. All the kids had fun (despite the mishaps), and my nephew can’t wait for the next one. We’ll be back next year!