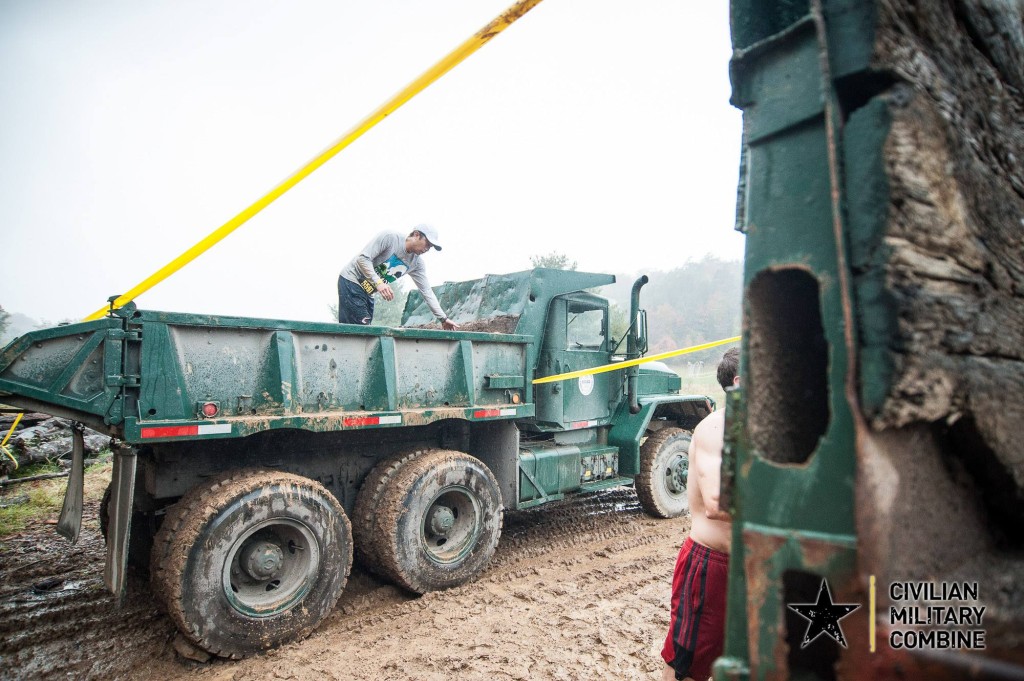 * Event Details
As this is still my first year racing in obstacle course races, I had no idea what to expect from the race and let me just say, it exceeded all of my expectations. To start, the parking was excellent being that it was walking distance from the main venue and FREE!! There were not a lot of extra facilities for bathrooms and showers, but there also wasn’t nearly the number of runners as there was for events like Amesbury Spartan or Tough Mudder. And although there weren’t many, I never had a problem getting in and out in a timely manner. The registration was pretty quick and the bag check was only $5 which is the usual going rate for a OCR race nowadays.

The vendors were pretty lack-luster being that there was only one for clothing related to the race, two for specific charities (selling food stuffs), and one primary food vendor tent. Again for the size of the race, I did not expect anything like what they have at some of the other events. What I did like is that they had Yuengling…Vince, I repeat, Yuengling as one of the optional post-race beers. I love the south being that I’m from there and they know what people like and not just what fits the bill. Food was so-so but I didn’t stay long enough to really need to get any but a lot of people were buying it so I’m assuming it was tasty.

The schwag they gave out was similar to the HH for Spartan (dog tags and a T). The T-shirt fit well, although it wasn’t a tech shirt, it felt good and I liked the logo they had presented on them. Other than that, it was pretty good clothing and the Judges in the PIT had sick volunteer shirts too!

* Race Details
Now on to the good stuff! Let’s start from the beginning…

The PIT. Whooped my butt because I did not train as hard as I should have for this type of AMRAP workout prior to racing. I knew what would be included in the 7 minute WOD, but when going for max reps, I did not know how taxing it would be towards the end. And 7 minutes is a long time too!! As Beth mentioned, I think the judges had different qualifications for what represented a “good” rep during each exercise, but my judge was super strict which I was ok with. My chest had to visibly touch the ground each burpee, my legs and arms had to be locked out for each rep of the shoulder press, and the kettlebell had to be fully extended overhead. I lost about 8-10 reps because of the judges tight eye, but I respect that. I wish all the judges would have been this way because I definitely saw some suspect reps during my wave, but nonetheless, I was focused on my own goals.

I registered right before my wave started just like Beth, so I was immediately in the PIT among arriving with no warm up or stretching. I like the atmosphere of the PIT being in the center of the venue with a lot of people watching and cheering for you. It was both encouraging and nerve-wracking since this was my first CMC and my folks were there to see me race for the first time. Not to mention I was in a banana hammock in front of a couple hundred people that had no idea who I was and no other Spahtens were there to give me the thumbs up that I could see lol. All in all, the atmosphere and intensity of the announcer and DJ was awesome.

Oh yeah, and the DJ was wicked awesome!! The music always was good and it even got my mom and sister dancing at the venue while they were awaiting my return from the woods. Kudos to the CMC directors on locating a good DJ because it was clutch.

Right away after finishing the PIT, I had two minutes to make my way about 50 meters to the starting line to begin the race. I loved going straight into the race like that because I felt that it truly separated the runners from the Crossfitters. It showed who was a real “athlete” and who chose to focus on one or the other most of the time during their daily/weekly workouts. The challenge was exactly what I wanted from this race. Right at the beggining was a short (75 meter) sandbag carry that maybe weighed 50# and it was all on pavement. Luckily, my Inov’s do ok on pavement or else my feet would have been hurting right away.

Right after that we hit a short wall climb (5ft) and then straight into the cold water! Froze my giblets but after taking the first plunge head first to get acclimated, my body adjusted quickly every time I had to. After the plunge there were quite a few 5 ft walls and climbing walls about 15 feet up with metal bars, which had a extremely dangerous rain coat on it from the non-stop rain we got from the night before throughout the day of the race. I loved the extra challenge, but it definitely made me watch my step as I climbed them.

Next, we ran through a golf course which I thought was hilarious because there were random people out and about and eye-balling me from a distance in my speedo. It was quite the scene probably seeing a half-naked, black man running through a golf course on the middle of a Saturday in the sticks of Virginia (they don’t know me well enough!). Anyways, there were some smaller obstacles along the way and then we hit the trails off the course to do some small water obstacle, some interesting running terrain being muddy and full of rocks, and quite a few thorn bushes as I remember cursing myself for only being in that speedo and my legs getting torn up.

The log hurdles we had to cross in order to get across the river was probably one of my favorites because the water felt good and I got to roll over every log. The silt at the bottom of the river was disgusting and sunk your feet right in after every step but it was kind of fun to do. After crossing there was some more trail running and then a traverse rope over water which allowed me great practice for next year’s Beast. Then more trails and river-running to get back to the golf course.

The volunteers tricked me a bit saying I was one of three people who had got to that point and there had been two waves released so I felt confident going into mile 4 thinking there wasn’t much left so I pushed it….then the black diamond slope came up and I had no idea I was climbing that thing. Straight killed my quads!! Mountain climbed some of it to give my legs a rest and trudged the little wood bridges they had built on the way up. I don’t know what they were for but it actually made it a little more challenging being that it wasn’t natural terrain and it was still on an incline. After making it to the top and legit running straight down the entire black diamond slope (no obstacles, straight run), we had some hay bails to cross and then a nice little water slide to go down into some trashy water.

The rest of the course is kind of a blur except for the awesome military trucks they had posted in the middle of the course that we had to climb up and into, back out, then back up and into the other before jumping on some huge boulders right off the truck and continue on the course. This was the coolest obstacle and really brought out the military aspect of the race a bit. The final obstacle that was right before the finish line was a 15 ft wall climb followed by a rope climb up two storage compartments, a tight rope walk, a small rope climb down then a fireman pole drop to the ground. Awesome little variations in there that may strike some fear into those with a fear of heights!

After that was the final sprint to the finish line and to the beer tent!

Again, I had a great time at this venue and the whole staff was very helpful and accommodating! I got some good promos for the team with Keith, the event coordinator and CEO, and got a chance to see some old friends from back in the day when I was still living in Virginia so that was great! I will be sure to be signing up for the CMC Brooklyn, Amesbury and Virginia again next year, especially if they hook us up with the sweet perks like they did this time.

P.S. I talked to Keith offline after the event and he said that next year’s CMC PIT will be much more geared towards endurance WODs rather than strength to incorporate added difficulty for the run ahead. I told him this was a great idea and I looked forward to whatever crazy stuff they come up with.

* Event Details
Parking was great, plenty of space and all located directly adjacent to the venue. While the latrines were slightly obscure, you would see them if you went to the packet/bag check area. There was only one vendor, a clothing company that produced the race shirts. But they had a grill going and beer for purchase, and the CMC had their own tent with CMC shirts to buy. Food and beer was a little pricey at $7 for a cheeseburger and $3 for a can of beer. Schwag was really cool, a very comfortable T that I didn’t want to take off and a dog tag with pseudo mission details and the CMC credo.

* Race Details
The course was fantastic utilizing a golf course, mountainous terrain, rivers and a lake, and a ski hill. Most of the obstacles were typical and the walls and ladder walls got a little repetitive. But I will say they got very innovative in a few ways that we all found very very cool. This included running a mile through a river, crossing back and forth at times to scale verticle banks, wading across a lake through shoe stealing mud to vault chest high logs floating in the water, and having to climb up one side and down the other of two large military transport vehicles. The last one was so innovative and well liked that I heard nothing but praise about it from everyone around me before, during and after it. Most people really hated the hill at the end of the race, it was a very quiet and sluggish hike to the top, but I think it’s that way for just about anyone who is climbing a 500ft hill after running 6 miles. It really pushed me to my limits. I have to say the difficulty fo
r me was “medium” on a scale of very easy, easy, medium, hard, very hard. Where Rugged Maniac was “very easy”. I felt as though I could have pushed on for another 3 miles or so if it was flat elevation but I’m only judging by my scale and I know some will find this race as their “very hard”. This race did challenge me, it wasn’t easy by any means, but with determination and a little training I believe that even the average person could complete it in about 3 1/2 to 4 hours. I will definitely run the CMC again and Niko and the crew have my full support with this race.