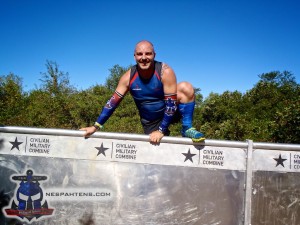 * Event Details
Was about an hour – forty five minute drive in.  Fortunately no traffic because the Van Wyck Expressway (Rt 678) can be an utter mess with the lousy roads and JFK airport.  It was also nice that for the first time in a long while I was not the individual driving, I was on navigation but I was stress free both ways! The facility washttp://www.aviatorsports.com/ offered FREE parking with easy access to your vehicle.  It was very windy and actually a bit chilly when we arrived (55 degrees?).  We had gotten to the event early  “just in case” traffic became an issue.  So the long sleeves I had on I was able  to run out to the car in a matter of minutes.  It was also a pleasure of having indoor facilities available to us inside the Aviator Sports Center.  This was a very family friendly event if spouses brought kids because of the arcade set up and various games inside (even a rock climbing wall).  I was quite impressed by the amount of vendors in the “midway”.  This was the largest I have ever seen and Paul had touched on the use of the space for the 5 largest teams (boxes).  I will touch on the Caveman To Go vendors.  They sold meals (advance purchase) that are Paleo Friendly.  I ordered mine and it was delicious! I had the hangar steak with cilantro and mashed parsnips that also came with a bar.  They also had a tent giving away free samples of their bars and chicken jerky.  They were a great vendor on site and with all the free samples they were handing out I will be sure to purchase from… Oh yeah… they tasted GREAT too! https://www.cavemantogo.com/.  Not lost in this they had many vendors that were equally great from Snapple, NesQuick, Muscle Milk and so many more not to slight anyone! The finisher shirt we got after the completion of the course was the nicest shirt I have received at any type of OCR! (This was MUCH nicer than the one I had gotten at Amesbury).  Also included was the dated dog tags which I actually like.  Of course there was a free beer unfortunately it was only Bud or Bud Light.  They had chin up and burpee contests among other things that you could take part in if you had the energy.  Showers were available as well as mats to roll out on, complimentary Kinseo Tape wraps and of course a first aid tent.

* Race Details
The Pit can scare some people away (although now you can take part course only or scaled pit) because if you haven’t done CrossFit or a similar form of training… it ain’t easy! it’s a 7 minute AMRAP (As Many Reps As Possible) of the elements.http://www.civilianmilitarycombine.com/overview/ and this element is scored and then combined with the course score for an overall score that ranks you.  I LOVE this because it shows a better fitness level.  You must score well… scratch that… must score GREAT in each if you want any chance at the podium.  The atmosphere around the pit is great, if you have the pleasure of being around the rail (have both times) in typical CrossFit fashion you have some great support near you supporting you through those seven LONG minutes.  Your judge (thanks to ALL the volunteers!) confirms your bib number, name and total reps.  You exit the pit and make your way a short distance to the start line while grabbing some water with about 3 minutes between finishing the pit and starting the course.  This was ALL flat.  The first 2 miles of this course was essentially just running with the exception of a sandbag carry and some walls.  At the first sled push began a mile of obstacles.  They were packed in and with the exception of the ‘mud crawl’ I had no back ups any place.  The mud crawl was a winding course with black pipe and netting in spots.  This I actually thought was a decent twist on it, but it was slow when I went through.  The second was the wiring was too loose and had to keep lifting and the orange netting on top was coming apart.  Really that was my only complaint obstacle wise, sure the buckets for the farmers carry could have more weight or the sled another plate on to make it more difficult, but I liked this course, it just could’ve been longer.   The generic course map on the site was NOTHING like the course and that stated 4.5 miles.  I paced myself early on (using my Garmin) thinking it was going to be 4 plus miles, but its not a big deal, I actually like not knowing what is going to happen and after Amesbury this turned out far different.  The Pit requires so many (85ish?) volunteers alone that it is tough to have a lot out on the course thus consolidating them to an area where they had the non stop obstacles for a mile.  Most unique / creative obstacle I found was to climb up cargo net, swing over and climb down a free standing rope.  This admittedly took me a little spell to figure out how to lock onto that rope (safely) to get down.  I am 100% in on the Civilian Military Combine and look forward to my next one.  An added bonus Team Dynamax (5th in 2013 World CrossFit Games) tackled the pit (1 male upped weight from 75# to 135# the other 2 males to 105#.  The 3 females stayed Rx) what a show they put on and it was great to watch in person.  They completed 852 reps! In doing so raised almost $4000 for One Team One Fight Charity! Even though heat times ran behind (as they did in Amesbury) and I wanted a longer course, THIS WAS A GREAT EVENT for both the athlete and the spectator and I don’t want this to be lost in any negatives I have stated.  The pit atmosphere is great with people crowded around and in the glut of the obstacles spectators had numerous photo ops of the ones they are cheering for.