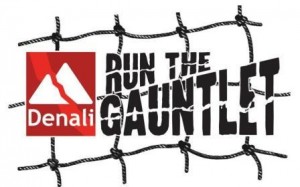 * Event Details
Denali puts on 2 events in South Eastern Ct, Rock the Gauntlet and Run the Gauntlet. Rock the Gauntlet was held in early may in a park in East Haven, and essentially it was a 5K where you had to ascend in a park to the top of a giant rock, and then back down to the finish.. Run the Gauntlet was held at Hammonasset State Park/Beach in Madison Ct. As we were stranded in the east fearing were going to suffer from racerus interruptus as we wouldnt be able to get to Chicago for the SR Super and certainly no where within 2hrs for less than $800, and werent going to drive all night , we raced local. Yesterday Viking Race, Today Run the Gauntlet.. Easy to get to off I-95. plenty of free parking. less than 3 minute walk from car to registration so we registered, put ids back in car ready to go The website indicated that the 2 early waves were full, messaged Amy Parulis about late wave availability , she said lots and we were off…… We were race day registration and
as race veterans we had our ID’s out, but they weren’t checked, the volunteer/employee deemed them not necessary. So Paul if you are running the next denali evnet and finish the same wave 5 min apart you’ll know why…:) the timing chip was similar in shape to what Warrior Dash has used in the past , circular, with 2 loops that could be ziptied to sneakers…. Vendors included New Balance, northface , smartwool, smithoptics.. thimble island brewing- got 2 tickets for beer after, we weren’t ID”ed but they gave us one, thats all i wanted, tasty… i think there were activities for kids, but as i wasnt bringing any i wasnt paying attention….but heck it was a beautiful beach day.. there was a pizza truck where for price of race admission you got 5 slices- which were in total equal to the size of 2 good sized slices….tasty….Tshirt was techy , except small which was cotton.. Instead of a medal, at the finish , just as in the east haven event , we received a ribbon,
.so now i have a green and a red,( wonder what the next color will be, hmm, blue maybe? , lol)

* Race Details
The course was basically a 5K loop starting and finishing mats at the same location,….they had 3 waves, leaving at 9, 10 and 11 am. when we arrived, by the time we got settled it was around 10:40,and we were able to cheer on the finishers, we saw runners from probably 8 to 70+ running, heard the announcer say a woman in an earlier wave finished in 25 min, looking at everyone and everything i gave myself a goal of 40 min……..im guessing in the first 2 waves they may have had a couple hundred racers each, and most were finished by 1 hr… there were probably 75 racers in our wave according to the announcer…..short countdown and we were off in the sand , around other beachgoers, for approximately 1 1/3 mi…my sand running skillset barely exceeds my climbing skillset , so needless to say 1/4 mi in Cheryl is easily 100 yds down range. even the sand close to the water was soft so no advantage to going that route… there were a couple under nets for crawling, on
e on sand, the other had a tarp with a few inches of water in it, they sent us knee deep into the water 2x, both maybe 50 yd trudges, , there was a balance beam over a shallow ( im guessing moat) that had 2 inflatable alligators in it.( ooh scary) ,3 orange barrier style hurdles that by design reminded me im a guy…… out of the sand, thankfully on to grass, first water station.( there were 2 total) ….a couple 4 foot hurdles with an angled front , slats to climb up, and then jump down…. then 20 feet of culvert tube… a little zigging and zagging parallel to the beach,…then we came to the dreaded Ramen noodles. basically a balance beam with foam noodles hung from above which mildy impeded your path, only problem i had at that moment was a ton of sweat in my eyes…. there was an 8 foot wall with, 3 slats on the front to get traction over and one half way down on the descent side. a little more running and came across back pack carry. probably w
eighed 30 lbs, for some reason i grabbed 2 maybe 50 yds down, 50 yds back…, got called crazy by at least one other racer… a short climb on a trail through the rocks, probably where i got most of my 13 feet of elevation , according to the garmin, on the descent there was a log hop , about 6 logs maybe protruding 4 inches out of the ground with a diameter of at least a foot, i took those nearly at full speed without breaking stride( awesome feeling). then it was down to the sand and maybe 100 yds to the finish, where i got the tickets for beer and my red ribbon….as you approached the finish, the announcer generally could see the racers number an would announce your finish.. i finished around 38 min so i was pleased in that respect… this would be about as good an entry level a timed OCR as you could ask for…the obstacles weren’t overly difficult, compared to other races ive done, they didnt really tap a lot into ones fear of heights, confined spaces and the
carry obstacle had the bags i chose, and lighter ones too according to the volunteers .. we couldnt have asked for better weather,, and we also realized it was our first day at the beach all yr….