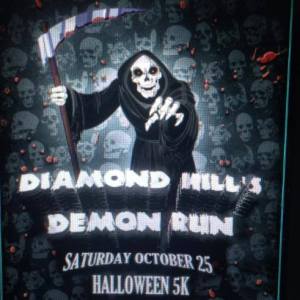 * Event Details
This event was held at the same location as FIT in Rhode Island.

Parking was onsite and free. There weren’t a lot of racers so parking was ample.

Facilities: There was one Portapotty right near the start line. Seeing as there was never more than 1 person ahead of me no big deal. But if more people showed up then perhaps a few more would be helpful. No changing or washing facilities and truth be told only a little bit of mud from rains the night before. I just changed near my car.

Schwag: Great nice quality heavy medal in the shape of a gravestone. Only racers who signed up online and paid full price got the T-shirt. (that’s ok; I’ve got plenty of Tshirts floating around). It was a white cotton T-shirt with orange/black.

Vendors: no vendors. There was a small table with slices of pizza, bagels, very large muffins and donuts with water for post race. No charge.

* Race Details
The race incorporated their haunted woods (about 13 haunted themed spots) as well as some more tradiitonal obstacles.

The course was approximately 2.1 miles via GPS tracing. They stated it was a 5K so I was expecting a little more distance.

The costumed MC announcer got us off and running right on time. You started off up into the woods up and down the hills but not as high up as FIT takes you. Everything was well marked along the whole trail. One water station manned by incredibly cute little ones dressed up about half way through.

There were still the FIT obstacles up; varying heights of walls, going up and over a very long teeter totter and other climbing structures. They had an archery spot set up where you had to shoot a suction cup arrow towards a zombie mask pinned up. Where you s hot told you what door to go through the haunted chapel. The man made fog was so dense in there you couldn’t see your hand in front of you. Plenty of freaky-factors to go along with this including a soft girls voice played over an intercom. I was running with my boy wonder who opted to stay away from any of the haunted obstacles in which you had to walk through. (I understand; he’s 8). There were zombies along the course and some scary looking clowns. Since these were the actors from the nighttime event they were fantastic. Some of them sprinted after you while others weren’t as menacing. One note though: if you’re running with someone younger not all of the actors got the “hint” to not haunt and chase my guy d
espite me giving hand gestures and saying something. Never saw some kids run so fast up hills in my life. You got to climb over a bus and later through it where the volunteers were quite encouraging telling us we’re almost there. There was a small mud crawl under string so this racer was happy to get her “mud fix” in. As we rounded the corner towards the end we were running along the water and found a nice heavy tire to flip (optional).

It wasn’t a difficult course but a nice fun haunted run. I think I would’ve been disappointed if I had paid the full price but for the NES price it was perfect! We didn’t stay for multiple laps but several other teammates did.

* Event Details
Free parking right on the property steps from the starting line is a huge plus in my book. Also free for spectators which was nice. Registration was very straight forward and they also provided free Bag check. I didn’t use the facilities but there were real bathrooms available. As far as schwag, the finisher medals looked great. I didn’t get a shirt but they looked nice also quality tech shirt big logo on the front and sponsors on the back. Would have been nice to see a few vendors.

* Race Details
Having just run the FIT Challenge a few weekends ago at the same location I knew how tough the course could have been. This was not the kind of race that really pushed you as far as use of terrain. I think we only reached the top of the hill once. Mostly it was go half way up and turn around. They were able to capitalize on the leftover obstacles from FIT which was nice. Favorite obstacle was the archery range. You had to take the bow and arrow and had to hit the target, depending whether you were successful determined which door you proceeded through. I thought that was different and unique. Course layout was straight forward and easy to follow. Overall while it was fun running through the haunted houses it was not very challenging. I heard that the course distance was only 2.3-2.4 miles. Seemed like the theme and distance attracted a lot of amateur racers and I would definitely recommend this race for any beginners looking to test the OCR world waters.

* Event Details
Smaller local event at Diamond Hill venue in Cumberland, RI (same venue as F.I.T. race). Solid venue with FREE on-site parking, tons of trails/hills and just under an hour from Boston. There were no vendors to speak of, but they did have a table set up with snacks and water.

* Race Details
Nice 2+ mile course starting with a small climb. Many obstacles from F.I.T. (walls, crawls, teeter-totter) were utilized. It was mostly a technical trail run with obstacles/Halloween actors in the middle open field to break things up. A haunted house in the middle including a portion filled with smoke that you could not see anything in which made things truly freaky the first time through. Some of the actors really got into it including with chain saws (sans chains) which made for a freaky run. An awesome (and huge!) medal at the end.

It is a shorter race with a lap taking ~30 minutes offering multiple lap potential but waves are limited to only 9am-11am. I would definitely recommend this one and hoping to see it grow in both field and length!