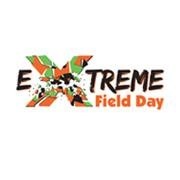 * Event Details
The windows were down as we neared the site and we could hear the music before we saw the course. My boys were already excited but now the energy level was palpable. I wasn’t sure what to expect as this was our first Extreme Field Day so I came with cash, thinking I might have to pay for parking but…FREE PARKING. Win! After parking my first thought was registering but with a 2+ hr drive the boys had other ideas. The ladies at the registration table kindly pointed them to the two porta-potties down the field. They sprinted off while I went through the painless process of signing waivers and acquiring their bib numbers. Although a 2-person reg team probably would get overwhelmed at a much bigger event, it was perfect for this one.

After grabbing our numbers and pins, we wandered in the open area where the vendors were. We just did a precursory glance around while getting ready for our first run (we had a 10 am Cub running and 2 10:30 Tigers). There were 8 or so booths set up around the perimeter and a playground-height pullup bar and an area for the kids to play cornhole. The upbeat music was playing loud but not so loud that my kids couldn’t hear my pre-race pep talk. The announcer called over the Cubs and my wee one ran off to warm up. After the little one ran, the two older ones had their turn. After their respective races, they got a medal at the finish line and then ran to the tent to grab their T-shirts. They LOVED their medals, a heavy, thick metal medallion hanging on a wide orange ribbon, very similar to the ones from the races I have finished. (I was wondering if, since it was a kids’ race, they would be handing out plastic (and probably less expensive) medals but I was not disappointed by
these more “grown up” medals). They were so proud of their medals and loved their T-shirts so much that they insisted they wear them for the rest of the day.

After the race, we checked out the vendors. While perusing the grounds, all the volunteers I saw were cheerful and helpful. There was a booth with face painting, sparkle tattoos, and a balloon artist. We were not familiar with the ticket system and thus we were in line for those activities for a while before I could see the sign declaring that it was 4 tickets for each. It wasn’t clearly noted where to find tickets so we opted to roam around for a bit looking at things. There were some local food vendors (beef jerky, some organic foods – granola and yogurt I think, as well as a local sports team selling baked goods), two free raffles for local items which we passed on since we are anything BUT local, an italian ice vendor, and a merchandise table. We found the ticket sales at that table, bought some, and got back in line, opting for two sparkly Skull-n-Cross bones and a balloon in the shape of a sword. We also acquired some goodies and sat down in the shade to fuel up befo
re the long trip home.

I liked the site, the layout, and the energy. There was plenty of Free parking (did I mention free?) and the festival area was quite large. I would love to see this event get bigger and have more vendors and little side activities for kids and families in that area. Also large sign explaining the ticket system would be very helpful.

* Race Details
My 5 year-old ran first. There was a pre-race warm-up run by one of the volunteers and it was adorable watching the 4-6 year olds trying to do jumping jacks. After a good warm up and a safety briefing (“Do we push people?” NO! “do we climb on people?” NO! “do we pick people’s noses?” *giggles*) they lined up and they were off. There were two older girls leading the pack, running as “rabbits” which helped keep the kids on track. Even with them, though, there was a slight bit of confusion in the beginning. The first obstacle happened upon was a small sand bag carry: Pick up the bag, keep running down the track, around the bend, back up and drop it. There were a few kiddos who weren’t too sure where exactly to drop it. Some kept it too long, some dropped to early. Next up there were tires lying on the ground to run through, straight into the “Run over the giant pile of dirt” (not an up and over, more of a long elevated dirt bed), down the track a little was an elevated platfor
m that they climbed up to and then down over. There was a bit of a jam-up there. I think the climbing DOWN was the scary part for the little ones. There were under-over-through walls and then something similar to the “Lobster Trap” at the Renegade: A large net draped on the ground to crawl under. There was a long stretch of corrugated drain pipe to crawl under and, lastly, the grand finale: a “barbed wire” mud craw (instead of barbed wire, there were ribbon flags stretched between hay bales). From there it was a sprint to the finish! Then the tigers were up and they ran the same course.

My thoughts:
– I think the obstacles were great. Simple enough that they weren’t too technical, challenging enough that they felt like they accomplished something. They looked well put together and safe too.
– There was some confusion at a couple of spots along the course, but this is to be expected when herding larger groups of children at high speeds. I think that MIGHT be alleviated with strategically placed volunteers.
– The course is taped off in such a manner that parents had access to pretty much the whole thing which was awesome! Parents can cheer kids on, grab pics to show off later, and younger children aren’t too nervous with mom and dad being out of sight.
– In the registration, it stated Cubs course was 1/4 mi and Tigers course was 1/2 mi. I couldn’t tell if there was any difference in the course length. My kids definitely could have handled and would have loved a longer course.
– My ONLY “complaint” with any obstacle was that at some point most of the ribbons got pulled down in the mud craw so the later part of the Tigers wave was more a mud “walk”. That would be a simple fix with a few more helping hands I’m sure.
– I didn’t see the older kids’ heats so I’m can’t speak to how those went.

Overall, we loved the race. My kids were super proud of their medals and they asked to do this “every year”. I would love to see this be popular and grow into something even bigger. I do wish the course had a been a little longer or maybe some other activities or vendors, just because we traveled so far and they were NOT ready for it to be over so quickly BUT with that said, I think this is a must-do race for kids, especially the younger ones.