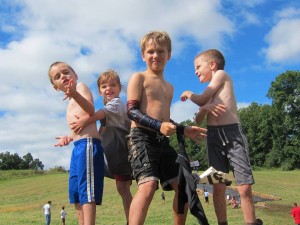 * Event Details
When I went to Extreme Field Day it was at Kimble Farm in Haverhill. It’s NOT the ice cream place sadly, but I still had fun! we parked on grass when people with orange shirts lead us where to go and where to park. it is $10 to park. There is food, water, porter potties ( I personally think this is important to know), and more!

* Race Details
Extreme Field day is a obstacle race for kids 4-15.there are different groups comparing to the age.First group is 4-6 and it is a half a mile. Ages 7-9 is 1 1/4 miles. Ages 10-12 is almost 2 miles. Last, but not least, is ages 13-15 it is 2 1/2. these obstacle it is very muddy. If you go some time bring a extra pair of close! For the obstacles there is going up then down 2 ladders (1 for going up and 1 for going down).3 walls a wall you go under, a wall you go through and a wall you go above. A mud pit that you have to crawl through.the 4-9 year old’s bring bags up a hill to a water slide. the 10-15 year old’s go into the woods and in the woods there is also a water pit they have to go through then they get out of the woods and into a mud obstacle or something I’m not sure because I didn’t get to go through it because it wasn’t ready. 13-15 do more than that but I don’t know what it is because I’m not 13+. but then we all go down the water slide.

* Event Details
The event was at Kimball Farms in Haverhill, MA.  It was easy to find and there were plenty of signs from the highway to the farm.  Parking was plentiful in a large field and cost the industry standard $10.  From parking, it was a very short walk to the road where bags were checked by security (thank you for taking everyone’s safety into consideration!), and then to registration.
Registration was very smooth.  The lovely volunteers were friendly and helpful.  The only thing that would have made things move faster would have been if the waivers were available to download and sign from home.  As we all know, the less time spent standing at a table with kids who are excited to see their race, the better.
The vendors were fine.  Nothing to write home about and definitely festival prices.
Schwag – each kid received a medal and a t-shirt.  The items are very nice and the kids love them.  The issue was that they only had one person handing out medals to hundreds of kids (thanks, Sandy Rhee!) and she just couldn’t keep up.  Since there was no finish chute, many kids were wandering around wondering where to get a medal.  The t-shirts were even worse.  They were given at the end, but there was nobody to tell the kids to get them.  We only got them later on because we happened to bump into the table while we were looking for something else.  In my opinion, for a kids race the shirts should have been given at registration.  I hope not too many kids went home without theirs!

* Race Details
The race was offered to children 4-15 years old with age groups as follows:  4-6 (1/4 mile); 7-9 (1/2 mile); 10-12 (1.5 miles); 13-15 (2 miles).  This is according to the website.  I had children in the 4-6, 7-9, and 10-12 age groups.  The youngest age group was supposed to run 1/2 the distance of the next group, but the course was almost exactly the same.  The only addition to the 7-9 age group was a sandbag carry.  The smallest kids must have run close to 1/2 mile (I ran it with her – it was definitely closer to 1/2 than 1/4).
The obstacles seemed well built and were kid sized.  The only obstacle that I worried about was the ladder up to a platform and back down again.  There were at least 50 kids on the platform at a time and more pushing from the back.  I didn’t see anyone get hurt here, but there were some tears in the younger age groups.
As I recall, the obstacles were tires, ladder to platform and ladder down, under/through/over walls, mud pit, boxes (nobody seemed to know what to do here), balance beams, and small cargo net.  After this point, the older kids (10+) went into the woods where they encountered a deep mud pit.  The younger kids crawled under a net and the 7-9 kids then carried a sandbag.  All of the kids went down the slip and slide at the end just before the finish.
As a parent, I loved watching my kids tear up the course.  Almost every kid seemed to be having a good time, and my kids definitely enjoyed themselves.  However, I was appalled at the lack of coordination.  To start, each age group was let off 30 minutes apart to give the everyone time to finish before the next age group began.  Unfortunately, there were a couple of hundred kids in each age group, which led to a serious backup at the first obstacle, which led to kids pushing each other atop an 8 foot high platform.  Smaller waves would have been the way to go here, with no more than 50 kids in each wave.  To be fair, after the first heat went through, they did split the other heats in approximately half.  However, the second half started a mere 10 seconds after the first, so there was no ease at the obstacles.  Additionally, since there were prizes for the first 3 places in each age group, it was no longer really a fair race.
Secondly, nobody seemed to know where the course was supposed to go.  The younger kids seemed to be OK since they were in a chute, but lots of kids cut off the walls and mud pit by turning the wrong way after the ladders.  I understand that it’s a fun run, but those kids missed the best part!  When the 7-9 kids got to the sandbag carry, many of them had to be called back and put on course because they were running too fast and missed the turn.  The markings just weren’t good enough.  The worst for me, though, was when my 10 year old ran off into the woods and nobody in a volunteer shirt seemed to know where he was going.  I wasn’t worried that he’d get lost (although when he got back he said that kids were running all over in there because the course wasn’t marked well), but I did want to know where he’d come out so I could take pictures.  Not one person in the entire festival knew where those kids were going!  A simple map would have been a major help here.
The last major issue was with the slip and slide.  This was a very wide and long piece of plastic lined with hay bales and it looked like it was going to be amazing.  That assessment couldn’t have been more wrong.  The water was supplied in a trickle from a hose attached to a square jug in the back of a pickup truck.  The kids had to scootch most of the way down because the plastic wasn’t wet enough, until the container ran out of water and the truck had to leave to get more.  The kids in the 10-12 age group had no water at all and just ran down the damp plastic.  What a disappointment!
The long and the short of it is this: I’ve been to a lot of races in my life – both road and obstacle course – and this is one of the least organized events I’ve ever attended.  I would not rush to bring my children back based on this day.  However, my children had a great time.  They are proud of their medals and they are looking forward to doing another obstacle course race in the future.  I just don’t know if it will be Extreme Field Day.