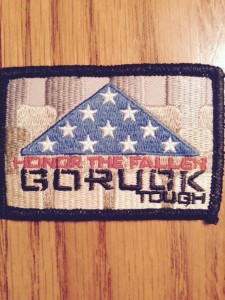 * Event Details
How would you celebrate your 45th birthday? A nice dinner out with the wife? Drinks with friends? A cool new gadget? How about 12 hours of punishment at the hands of former special forces military cadre rucking the streets of Boston all night “carrying heavy shit” honoring those who gave the ultimate sacrifice for our country? That’s what I did.

This being my first GORUCK event, to say I was a little nervous was an understatement. I parked at Post Office Square garage, walked to South Station and took the red line from there to Andrew Station. The start point was at Joe Moakley Park in South Boston, but a few of us met at the ruck off point (the place where everyone goes to drink so they can meet each other before the beat down) at The Connection, a definite regulars bar in Southie. Here, purely by chance, we had the privilege of meeting and thanking a veteran who served in WWII and was actually deployed at D-Day. Talk about an inspiration! After downing a few PBRs, we made our way to the start point and started stretching out.

* Race Details
Around 9:00 pm, the cadre showed up wearing nothing but a t-shirt, long pants, and a GORUCK cap. No socks, no shoes. What could this mean? I was about to find out. After a brief introduction and roll call, he began inspecting our rucks. “I’m going to show you how much useless shit you packed for this event.” He had one of the team go around with a trash bag and collect all the food, gels, etc. from everyone. It ended up filling the trash bag and weighed about 35 lbs. “This is your new team weight. Nobody eats unless I eat.” Needless to say, we never ate any of it.

Cadre came up and inspected my ruck contents. I had my individually wrapped bricks strapped together three at a time.

“What’s with the strap?” the cadre demanded of me.

“It’s to stabilize the bricks.”

“Why would you want to stabilize the bricks?”

“So they don’t shift in the ruck.” Wrong answer.

After inspection, the cadre went on to tell us how we were a bunch of candy asses for wanting to make our rucks all pretty and organized and comfortable instead of just throwing our stuff in and going. “Dump your rucks! Now repack them. You have 15 seconds. Go!” Of course we failed. “Dump your rucks. Repack them. 15 seconds. Go!” Fail. Dump. Repack. Fail. Dump. Repack. Fail. After several more rounds of this, he finally told us to repack our rucks for good by just throwing everything in without organizing it first. So much for the straps. Now it was time for the welcome party.

Then we rucked up and went to the beach, still barefoot. “Do you wanna be turtles or do you wanna be crabs?” cadre asked. We decided on crabs. “Well, then you better get back to your home. Crab walk into the water up to your armpits.” We did. Then came rolling right and left in the water as the cadre barked out commands. More flutter kicks (which actually felt easy because the salt water buoyed up our feet).

Finally, the time came to ruck up. Me and another newbie were made team leaders (TLs) and another newbie served as navigator. We were given a map and instructed to get the team from Joe Moakley Park to the waterfront in double line formation. Oh yeah, and we had to team carry a ~80 pound timber post on the way. I was given a 25 lb. weight vest to wear. All while wearing our rucks and still barefoot. It was about a 2.5-3 mile ruck, barefoot and soaking wet in what was now a chilly, windy, mid-40 degree evening.

When we got to the waterfront, cadre told us to untie our shoes and place them in front of us. Then we stepped to the left and that was the pair of shoes we would wear for the rest of the event. This turned out not to actually be the case, but set up a lecture about sacrifice and how soldiers sacrificed to protect our freedoms, some of them making the ultimate sacrifice. We were all required to bring a picture of and story about an American soldier who paid the ultimate price protecting our freedoms. We stood in the cool night air shivering as story after story was read, some quite emotionally. It was humbling. Time to ruck up again. Cadre was kind enough to let us put our shoes back on. However, he went behind a building and came back with two 16 ft. timbers and two 5 gallon buckets filled with sand. In addition to the post, the regular team weight, the flag, and the sack full of food, we also now had to team carry the buckets by dangling them in the center of the timbers. T
wo new TLs were appointed and we were on our way.

We followed the Freedom Trail for a while and basically rucked all around Boston, rotating people in and out of the team carries to make sure everyone carried and everyone got breaks, with our destination being Bunker Hill. Once we approached Bunker Hill, we stopped briefly and the cadre disappeared around a corner. He returned with two more buckets of sand. Another bucket was added to each 16 ft. timber. Each bucket weighed approximately 75 lbs. so now those team carries were around 150 lbs. give or take. It was a dark, cold, heavy ruck.

We rucked some more, and eventually arrived…somewhere…it was behind an ambulance garage near a clock tower. I noticed it was almost 4:00 am. At this point, cadre produced a gunny sack containing ropes, straps, duct tape, and something with wheels that looked like a roller skate. We were instructed to build a contraption out of the post and two 16 ft. timbers that would suspend all four buckets from the roller skate-looking thing, which fit perfectly in a channel in the post. This contraption, dubbed the Pendulum of Pain, would be team carried (along with the other team weights) to Boston Common. The buckets could not be touched or steadied with hands and the roller could not be impeded in any way during the carry. Of course, this meant that the weight of the buckets would shift back and forth along the channel as we moved. The total weight of the Pendulum was somewhere around 400 lbs. but trust me, it felt WAAAAY heavier than that. Perception. And just for good measure, c
adre went around the back of the garage and came back with two slosh pipes and two elongated orange bags filled with water that we would also team carry.

Two new TLs were appointed. This was the part where everyone really needed to embrace the suck. We carried the Pendulum of Pain for about 4-5 miles, frequently rotating people in and out as they were crushed by the constantly shifting weight. It was slow going and awkward. There were plenty of times we had to maneuver around poles or planters or move aside for traffic. Groans of pain filled the early morning air as the weight shifted from one end to the other. We finally reached Boston Common as the sun started coming up. Then we had to go to the other side of the frog pond. At last, we arrived at our final destination and were able to disassemble the Pendulum. More soldier stories were read, emphasizing that, as much as it sucked to carry that Pendulum, it was literally a walk in the park compared to what many veterans had done and continue to do.

Again, new TLs were appointed and were on our way back to the start point. By now, the sun was well up and we were beginning to see the end in sight. We still had to carry our rucks, the team weight, the flag, the bag of food, the slosh pipes, and orange water bags…but we were done with the Pendulum! The cadre instructed the TLs to take us on a route that added another several miles to our already long ruck back to Joe Moakley Park. We trudged forward in relative silence.

When we got back to Joe Moakley Park, I was expecting another lecture and then the announcement that we were done. Congratulations! Wrong. We were instructed to front carry our rucks and do arm circles “so we wouldn’t get stiff muscles.” Arms out to the side, arms overhead arms out front. Side, overhead, front. Clap hands behind back. Clap hands above head. Side, overhead, front. Then cadre had us take two bricks out of our ruck and repeat the sequence while holding a brick in each hand. My arms felt like they were going to fall off! Finally we finished, filled out our peer review sheets, and got our patches. We were done! Class #1479 in the books!

Honestly, I originally did this GORUCK Challenge to prove to myself that I still had the physical capacity at 45 to hang tough and take the beat down. But as GORUCK hammers home, it’s not about you. By the end of it, I came away with a much more valuable lesson about sacrifice, teamwork, and gutting it out no matter how bad things seem or how tough they get. As one team member later posted, “…everyone did a great job. And I mean everyone. Usually there are people that sandbag. Not this class, no one bitched and everyone did what they could do, what we all could do, which was more than we thought.” I’m still processing the whole thing, but it was well worth the price of admission. Thanks to all the veterans who served or still serve. Please take some time to remember those who serve and especially to those who gave their lives for our country.