Submit your own Race Review 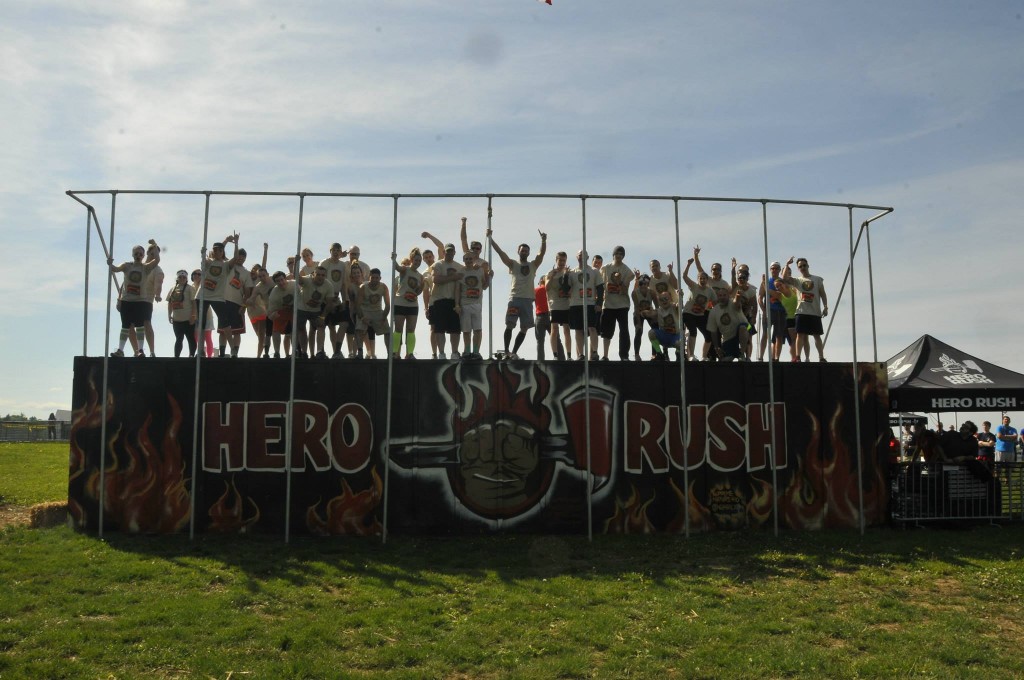 * Event Details
Written with heartfelt gratitude for a fellow “Jake”, a true hero… I hope I ran with enough honor!

This, for me, was going to be a very, very emotional OCR event. There was only a small contingent of NE Spahtens there. Though small, we were there to cause mayhem and let our presence be known. Myself, Ariel, aka Jane Smith, Eryn Schlosser, and Betty Gonzalez descended onto Ellms Family Farm for the 11:00a 343 heat. This heat was dedicated to the 343 firefighter that lost their lives on 9/11. Registration was a little disorganized and slow, perhaps understaffed, but when we got our bibs all was forgotten. If you were lucky enough to run in the 343 Heat you were given a special bib with the name of one of the lost firefighters from 9/11. I was number 52 and ran in the memory of Michael Scott Carlo. FDNY Firefighter Michael Scott Carlo perished along with five others from Engine 230 in the collapse of the World Trade Center on September 11, 2001. Their house, Firehouse Engine 230, is located at Bedford-Stuyvesant, Brooklyn, New York City. FF Carlo was 34 years old when he answ
ered the final bell.

* Race Details
On to the race, the entire race had firefighting themes. A sign told us that the course was 4.74 miles. We were corralled in to the starting area for the 343 heat and a moment of silence was offered followed by a gut-wrenching bagpipe rendition of Amazing Grace. None of the mighty Spahtens could hold back their tears. After composing ourselves we were off. When the alarm sounded you had to run a flight of stairs and slide down the firefighter pole. Obstacle 1 complete, we were off running. The terrain was typical farm, mowed over grass, divots, and tractor lines. There were never any challenging hills either up nor down. We ran a mix of under the sun and through the woods. There was a mix of sweat, fun and a little bit of crazy mixed in. We crawled through smoke-filled rooms, wires in tubes, climbed ladders, pulled tires, busted down doors, hopped through windows, pulled stretchers through barbed wire, waded through a pool of sludge and saved a victim with 30 chest compressio
ns. Then there was the Towering Inferno. This is the obstacle where you ascended through giant air duct onto a platform high above the ground, only to slide down a tarp into yet more water.

The obstacles were a mix of things I’ve never seen before and things I didn’t expect. The race ended with several fire jumps and wading through a pool of water while spectators splashed you to their hearts content and finally the finish line where we got our medals and special 343 T-shirt with all the names of the fallen firefighters.

Overall the value was great, the course wasn’t very demanding and the obstacles, with their firefighter theme, were entertaining and unique. This was an excellent race for beginner OCR-ers. If I was asked to do it again I would only consider it if I was able to run in the 343 Heat, the emotion and connection I felt were priceless.

* Event Details
I have done this race for the last 2 years, or since they started. I got a late start with all the kids(5) and that led to problems with parking and registration. The event did a better job then last year but i did not. To park, get here early or walk, not a long walk but with kids, tent, cooler and the return trip for every thing that was forgoten, it was a pain. Hero rush has most of its crowd run early so there is a small jam between 9-11 for parking and registration. Registration required separate waivers for each kid and as I was late and puter did not want to print waivers. I had to fill out waivers and the separate tent did not have enough pens. Once in the line it went smoothly. Faster than last year. I did not do the vendor thing because every child would want something. Food was good for my needs and the craft beer was great, with the hero bucks. I don’t drink much anymore, and don’t  remember 6 bucks for a draft and 5 bucks for a bud.There was plenty to keep all my
midgets occupied. This was an improvement over last year.  The biggest fail of the day was getting a late start. It messed up everything including placement of the Spahten tent which ended up behind a fire truck, where it was hard to find.

* Race Details
The course appeared longer this year 4.74 miles, don’t remember exact length. Last year the race was at the end of the summer and it was dry, no mud. This year there was plenty of mud churned thick by the first 600 racers. With a narrow trail this did cause a jam in the woods as people tried to skirt the edges. A wider trail would help here but it was not to bad. Plenty of water was available and the obstacles were not hard except for 2. The first was the fire hose carry. Not hard by its self, but as I flipped the hose over my shoulder the metal connector bonked my noggin. Next mile or so was fuzzy. The other tough obstacle was the hose climb. Again, not hard but many people could not do this and the line for the ladder backed up. I just climbed the hose and bypassed the line. Overall a Hero Rush is not to difficult, it is a good family event, a warmup for a hard race, or an introduction race for new people to see if they like OCR.  For an extreme runner, it would be easy. Ex
cellent for what it is, above average for regular runners.