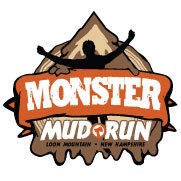 * Event Details
Free ample parking. Located near a lovely flowing river to rinse off and hang out in. Facilities are great. Located at the base of Loon mountain in The Governors lodge. Lots of space for friends and families to hang out and watch. There is a sectioned off section for adult beverages, which can be purchased in site as well as delicious BBQ foods. Coolers were welcomed. Yard games (corn hole, polish horseshoes) etc were set up for visitors to use. The start and finish were right next to the lodge which made for a fun environment. There were a couple of vendor tents I didn’t get to check out. The swag was sweet…. Awesome t-shirts designed by Kevin Bell.. Who has much to do with the design of the course as well. Also included was a fun water bottle detailing the obstacles that were on the course.

* Race Details
Waves started at 9:30am, I believe. Every 15 minutes a new wave would start with a out 40 people. This being my first mud run w/ obstacles, I didn’t know what to expect for wait time.. The longest wait was two people tops. That was only on the cat tracks that were draped over a school bus people had to climb up and over. There was a wall climb next that all spectators could watch teams or individuals climb over. We took our time on this course to have FUN but it could definitely be a tough course if you wanted to push yourself! Some noteable obstacles barbed wire crawl, tube downhill water slides into refreshing mists of snow gun water delights! There is a pond swim of ice cold mountain water. Of course all obstacles can be skipped if necessary. There is a horse stable challenge to clear 5 or so foot consecutive walls. There is a fire hose carry up 1/4 mile of the hill and then carry the hose under another barbed wire crawl. Spider webbing in between the trees of the landsca
pe. Think- glade mud run! The course had 22 total obstacles over a 5k mountain course! The ending was a super water slide down to the lodge, completed with a tubing slide into a mud bath at the finish!!! Overall this course exceeded my expectations and was a blast! Met some Spahtens there and helped introduce the group to a few new ones! I had the opportunity to speak to Kevin at length about the organization of the course.. In the fourth year, they are certainly growing and open to feedback! There were around 415 people who ran (I think). Again, my first mud run… So limited knowledge of how it compares. But the fun meter was awesome! Hope to meet more people in Amesbury!

* Event Details
This was my first time participating in the Monster Mud Run at Loon and I was not disappointed at all! Loon offers plenty of parking located right near the main lodge and race festival area. The parking was also free. Registration was relatively quick, but the line did seem to be getting a little longer as the later heats arrived. Facilities are loon were great. Bathrooms right on-site, no porto-potties needed. Showers after the race were provided in private shower booths (basically shower porto-potties), but the better option was the river right across the street.

There were a few vendors near the festival, most notably O2X Summit Series who was offering 40% off their race at Loon on October 18th.

The Monster Mud Run offered trophies for overall female/male winner, fastest two person team, fastest four person team, best Team name, and best costume. The trophies were the coolest I have seen. It was an engraved hatchet glued into a piece of a birch tree.

* Race Details
The course was awesome. A great mix of steep climbs, technical trails, rocks, and an ice cold swim. Like most OCRs, there were standard obstacles like walls, barbed wire crawls, cargo net and monkey bars. One thing that was prevalent throughout the course was mud. Within the first 100 yards, you were covered from head to toe in thick mud and this theme continued for the whole race. They had snow guns spraying water scattered throughout the course, which created sloppy trails all over the mountain. One of the more unique obstacles was the fireman hose carry. The hoses were laid out to their full length (male and female lengths were available) and you had to take the hose carry it uphill and then through a barbed wire crawl and back down another hill. The hoses weren’t heavy, but very awkward to carry and maneuver under the barbed wire. Thankfully, it was about 70-75 degrees in the morning because the swim was comparable to Arctic Enema at Tough Mudder. It was probably about 30
-40 yards (maybe more?) long, but the river is mountain fed and had to be about 50 degrees. This swim section could be bypassed if you did not feel comfortable swimming. There were 2-3 life guards and 2-3 other emergency personnel near the swim as well. After the swim, we were sent through a horse stable where you had to climb 5-6 four walls back to back to back. Some more technical terrain and one last barbed wire crawl popped you out about half way up the mountain. From there it was a downhill sprint about a 1/4 mile or so to the finish where it ended with a slip-n-slide and then another slide through a large tube into a mud pit. This proved to be a very exciting finish to the race. I was fortunate enough to make up a lot of ground on the downhill sprint and pass the guy in head of me in the last tube to win the race by 1 second.

Having done about 12 Spartan Races, 2 Warrior Dashes and 1 Tough Mudder, the Monster Mud Run can hang with the big guys in the OCR world. This race is perfect for a veteran OCR athlete to a newbie looking to try their first one. A few more strength/higher difficulty obstacles would be beneficial moving forward. Also, I think a specific elite heat division would be a nice addition as well. The Monster Mud Run is definitely on my race calendar for next year.