Leave your own review here! 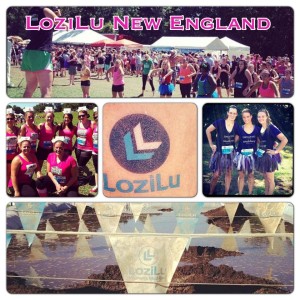 * Event Details
Parking was $10 and though crowded, fairly organized so cars wouldn’t get stuck or wait too long to leave. Plenty of portapotties, since this was a women’s only, there was one big tent to change in. They didn’t have any big name vendors, mostly small companies trying to still get noticed, a body “wrap”, some energy “chews” giving out cups of pills to swallow-eww) I didn’t notice a clean off area-I used the lake myself, along with several others.
I was surprised the “schwag” I got was a tote rather than a shirt or medal, I would think it costs more in production, but realize it’s likely because they are trying to aim towards a womanly way-which was more obvious throughout the day.
Beer: I was confused when I got there and was slapped a wristband on, which turned out to be good for a free beer with a choice of miller 64, coors lite, or reds(hey, variety, I’ll take it!). The reason I was confused was because in their email the day before this is what it said: “Is there free beer at the finish? No…but LoziLu’ers have free access to the Snack Drawer at the finish. For those desiring an adult beverage, beer is available for purchase (remember your ID)…Sorry, no carry-ins (venue rules).”
The “snack drawer” was a table of cheezit’s, lollipops, water bottles, and miniature Hershey’s next to the changing rooms-whoo hoo if you’re into that. Personally, I enjoy something a bit heartier after a race.

* Race Details
The course was Kimball farms, which is becoming increasingly popular as it is a great location of accessible land, so they already had that going for them zig-zagging around the field, up and down those steep and muddy hills, and spectator ready. They had typical obstacles and named them with cutesy names, the first hill was “heartbreak Hill”, I suddenly forget the rest-but they were ridiculously cutsey.
There were walls to climb over, which looked like pallets as they had big gaps to fit your feet easily in. There was a spiderweb, a setup with a tarp over it to crawl through, of course mud pits, and the best was the slide! The slide could do 4 people at a time, it was bouncy, and there was a pool of muddy water at the bottom. The line for this was massive, which was not ok. A few people skipped so they wouldn’t have to stand 15-20 minutes, but it was worth waiting for. But really Lozilu, please splurge and get at least one more to have next to this.
I would say this was a race for beginners, it definitely seems like it is aimed to please one on the rag, candy, making things not-too-difficult, and even-wait for it-a table handing out tampons on the way out! Now, that is cute, and I do like a freebie, but it makes for the feel of a joke of a company.
I saw people who were first time OCR runners, and talked with people who do them regularly. The bouncy was fun, the wait was not, and the most challenging part of this were the hills. The obstacles they made were somewhat flimsy and not very exciting. A balance beam and a wall yes, bending to get through a spiderweb, and go over/under walls not so much. There could be more of them.
Would I do this again? yes I would. Why? Well, It is the only race I have ever done that made it so those on the course could hear the music as well as those in the gather area-kudos for that. The mud was there, also a plus. I have seen “mud runs” where there was no mud. There was beer after telling us there would not be-I do like a free drink. And mostly because the atmosphere, and customer service was grade A. Originally I had registered for last years, and could not make it. They have a “no-refund” policy, so I wrote them and asked if I could use last year’s reg for this year, and they agreed! I also had a few problems with registration, and they were super speedy with their replies. Thank you Lozilu.

* Race Details
When Mary Currivan Joyce posted that she was giving away a Lozilu entry  I was not too sure if I was going to offer to take it off her hands. Then again free is free and how could I pass up the opportunity to represent the NE Spahtens at an all-women’s OCR event. So early Saturday morning, coffee in hand, Debbie Finnigan and I headed out to Kimball farms.  An hour later we were standing in the same field we were at two weeks ago for the Foam Fest with one notable difference, no shirtless men.  At first I was excited and felt right at home. I went to a all woman’s college and work at an all woman’s personal training studio and know how empowering a single sex environment can be. It was exciting to be able to be in an environment where strong, fit women of all shapes and fitness levels were celebrated. Then I saw the plethora of tampons, candy and chocolates but more about that later.
After we met up with other fellow NE Spahtens we headed off to the unusually quiet and calm start line. While smiles abounded the typical high energy and pre-race jitters that get me geared up was missing. When race started it took a few seconds for the women to even begin moving and the heard moved about as fast as a herd of pregnant elephants.  And then we stopped.  The first obstacle was the tire run and the tentative pack from our 8:45AM heat carefully made it through. We continued up what was termed Heartbreak Hill (nothing like the real one) and came up to Hay Now. About four lines of bales of hay, no more than 2 feet high were in front of us and as I hopped over each one I heard someone tell me to be careful and quietly  (since horahs and yelps of excitement were not part of this run) laughed.  I wasn’t sure what harmful thing could have happened as my 5 foot self.  The rest of the obstacles were pretty much of the same variety, non-challenging. When we came upon the
best obstacle of the course, the inflatable slide I was told that I had to use the rope and to hold on tight so I would not fall. At this moment while I climbing to the top of the slide, no rope needed, all doubt that this race was not that bad vanished.
No women empowerment was going on, no celebration of strong women was occurring. This race was setting back what OCR’s and women only OCR’s are set out to do, show that women are capable of anything.  Instead the atmosphere induced strong women to tread lightly and carefully along the course, speak softly and apologize for running too fast. Once we crossed the finish line, delicate bones intake, the feminist set-back continued as we were greeted with tampons, bowls of candy and chocolate and vendors promising to make us beautiful, skinny and toned in 45 minutes or less.
The premise of a female only OCR is great. Lozilu did a good job in providing a friendly and welcoming environment for women who might be apprehensive to run an OCR with men. The camaraderie support among the women mirrored that of other OCRs. If Lozilu and other women only races would understand that they can challenge women and let them realize us females are indeed capable of running fast, working out hard and pushing our bodies to maximum capacity they will have a winning combination. As Amy Licciardello Lillis said “I wish the people who organize these things would realize that they can make a race (that is a race – timed and scored) with obstacles that have cute names but are still challenging.”