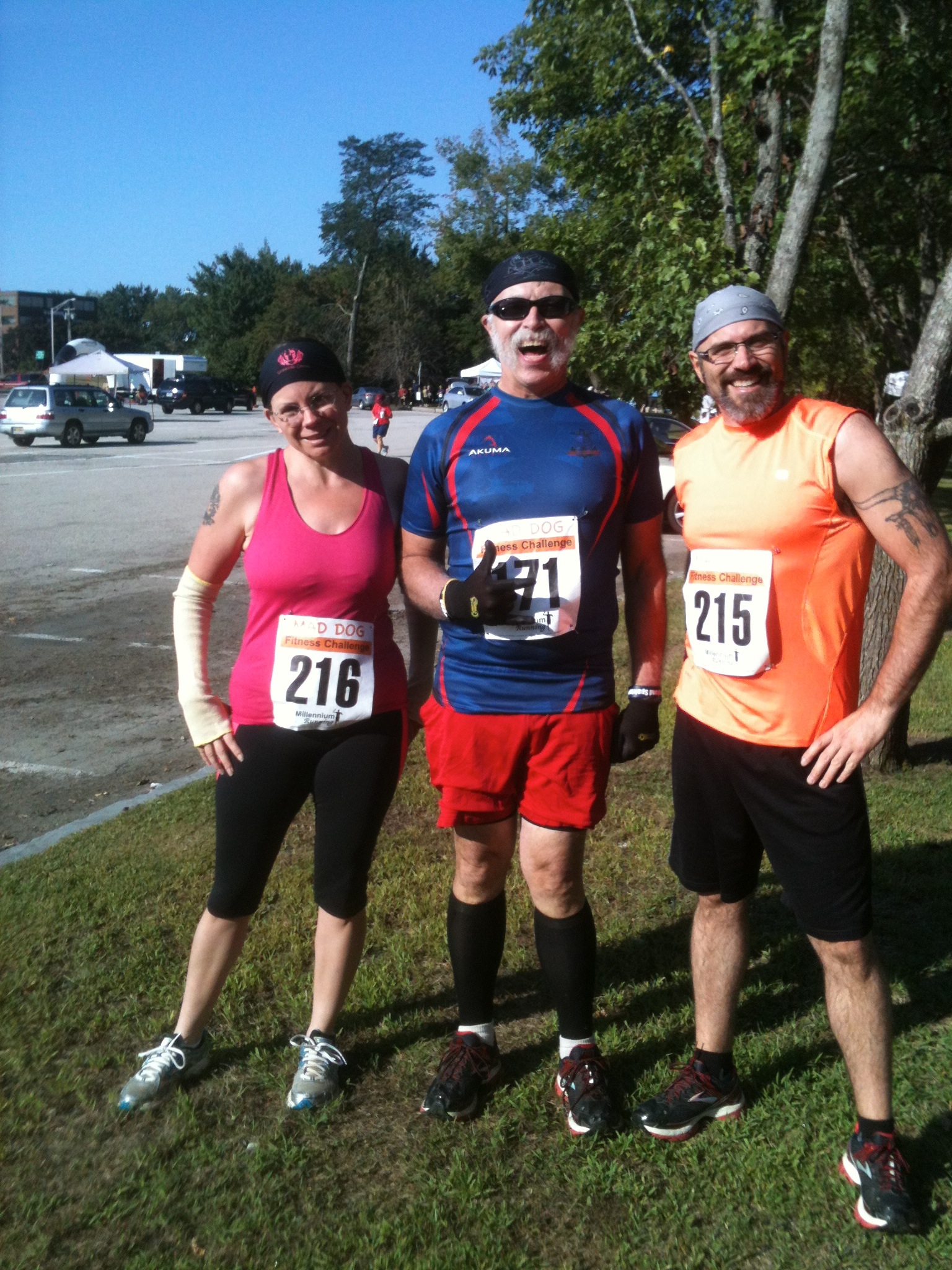 * Event Details
Ran the Mad Dog Fitness Challenge this past Saturday. There were 3 of us from the NE Spahtens there: Dennis Michaud, Michelle Cunha and myself.

Michelle and I walked to the event, as it was only a couple miles from home. However, it looked like there was ample parking. Each wave was limited to 100 participants, so we knew there wouldn’t be a problem with overcrowding, and I’m pretty sure most of the waves had much less than that. Ours only had about 20 or so people.

Registration was straightforward. We got t-shirts and hand towels. The t-shirt is OK, 100% cotton, nothing fancy. Don’t really care for the hand towel, as it’s not something I’ll use. No medal or beer glass after crossing the finish line. However, there were free beer tokens, always a plus! No vendors other than food that I could find. The food available was typical: burgers, dogs, ice cream, soda. There were 5 options for our free beers, which Dennis and I took full advantage of.

One gripe I do have is that not one of the 4 volunteers that I asked could point out where the medical tent was located, and as far as I could determine, there wasn’t one. Concord Fire Dept was on hand but there should have been a clearly marked area to go to.

* Race Details
I wouldn’t qualify the course as an OCR but as a 5K race with a few obstacles thrown in. There were 2 obstacles right after going over the start line. A hurdle type obstacle, with the 4 or 5 slats set about 2 feet apart, and a short wall. From there it was a lot of running. Almost 2 miles of running before seeing another obstacle. There were two 6ft walls and 25 burpees (of course there were burpees). Then another long run back to almost the very beginning where we saw the last 4 obstacles: more hurdles, a run-up vertical wall, a short crawl under a cargo net, and another short wall before getting to the finish line.

The race was just shy of 4 miles, so a little longer than a standard 5K, starting at Kiwanis Waterfront Park to Terrill Park and back again. The course went along the main roads but the one area where we had to cross traffic was well-controlled by the local police. A couple of not-very-steep but long hills gave the legs a nice burn. I do wish there were more obstacles (don’t we all) and that they were spaced out a little better. No finisher’s medal, but the emcee did call every persons name as they crossed the finish line.

I talked with the event organizer, Brian, after the race. He did state that he was hoping for more obstacles but that there were challenges dealing with the City of Concord and that things kept changing (race course, where he could and couldn’t set up obstacles) right up to the week before the race. I think he did a good job overall and it sounds like he’s hoping to improve for next time.

While I wouldn’t classify the race as challenging, and certainly not the “toughest” 5K, I can say it was fun. The volunteers were helpful and friendly. The obstacles felt safe, not like they were hastily put together, or with sub-standard materials. It was definitely a family-friendly event, as there were quite a few kids running the race in their own waves, and a few with parents in the adult waves.

By the way, Dennis and I were interviewed by Concord’s public access channel,Concord TV, about the race. The interviewer stated that something would go up on to their website (yourconcordtv.org) soon and would air on the channel in the next couple of weeks.