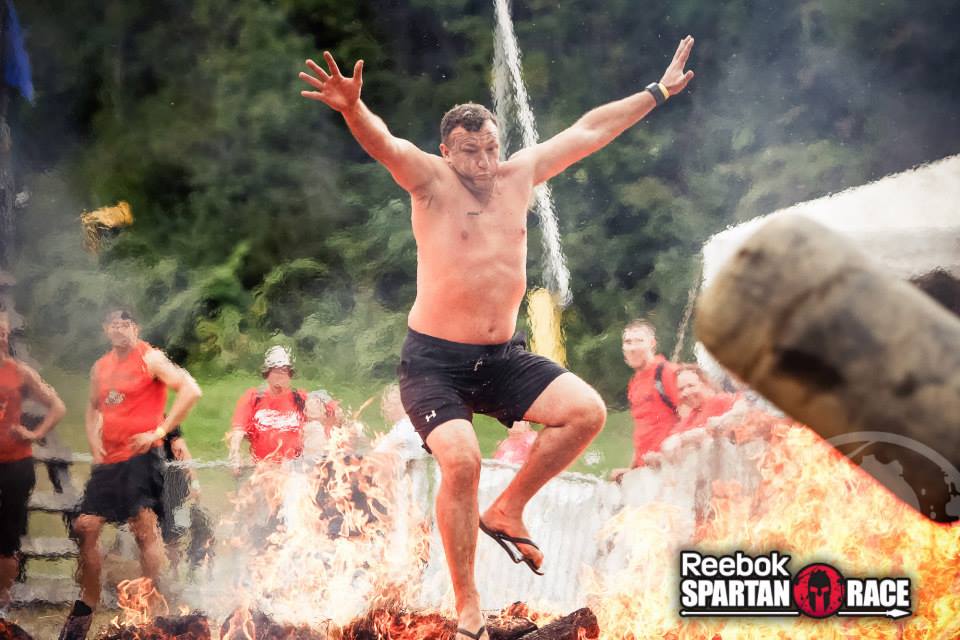 SPARTAN SUPER BLOG: 3.5 hour ride to the venue with no problems finding the place. Upon arrival at 9:00am, Parking lot was full so we traveled about 1/4 mile down the street and parked at a local business for free (although no one was there to direct us to do this, we just noticed the other hundreds of vehicles there and followed suit.) Grabbed our bags and made the short walk to the venue. Race rituals proceeded and before we knew it, we were at the start of the NJ Tri-State Spartan Super.

Immediate, unrelenting, head down, body forward, one mile or so hike straight up to the ski lift. Some flats, some nice trail running out and about, javelin throw and water crossing. Grabbed my life vest and back stroked to the platform as awkwardly as I know how. Back off the platform to back stroke to shore when the girl next to me jumped in and covered my face in water, causing me to choke a bit which apparently looked to the lifeguard behind me like I was drowning, and possibly to the people on the platform, but I was not (LOL) so he grabbed under my arms and pulled me to where you could touch with your feet. I gladly accepted the help since I saved some energy there but it was comical. Kudos to the people volunteering at this obstacle for being so quick to respond to what could have been an “actual drowning” incident. (BTW. have I mentioned I hate water crossings??)

Logs, javelin, walls and back down some sick down hills which I did my best to run on, to make up for all the slow, steep up hill walking. Back to the base area for the sand bag carry which did not hold a candle to the Amesbury carry, and I was happy about this, believe me. The amount of steep uphills on this course made up for the lack of steepness of the sand bag carry. BTW… whoever knew you could ski in NJ?! Back up, another relentless hike that seemed even farther than the initial trip to the ski lift, out and about, and around, with some more real nice trail running. Then of course, after more trail running/hiking, we found ourselves at the barbed wire crawl. Set up differently at every course, this one was complete with some large mud holes that most racers were avoiding. I found these to be my way of passing quite a few people and pulling ahead by crawling, rolling, and side crawling. Next was the somewhat new inclined wall , which is where I saw several racers cramping up something terrible. I took a few sips from my camel back (most people cramping did not have one) and nailed the wall. I passed many racers cramping up on this course, a site you normally do not see at a Sprint.

More sick down hills and a very brief uphill right near the end as a last little kick in the throat. Then came an obstacle I did not expect to see at a Spartan race, the ‘death’ slide. A man made water slide made from white plastic and a quickly dug, not so deep hole. After a 10 minute wait that seemed like 20 and many conversations with other racers about “why we are doing a slide”, it was my turn. I noticed some people were getting stuck several places down the slides and the shampoo and power washers were not helping. I planned my attack, jumped forward a few feet, laid down flat and off I went. Only to be stopped a few feet later, so I pushed off the sides, got going again, stopped again, until I very slowly slid off the end of the slide and plummeted into the mud pool or so I thought until BANG, a jolt went through my spine from my tailbone as I landed my fragile tailbone smack dab on a rock. I stood in the mud pool for awhile until I shook that off and had to put the game face back on.

Back down the final decent to the rope climb which I opted for burpees since the shock wave was still going through my ass. Next came the traverse wall and despite my excruciating pain, got about 3 blocks from the bell and took on my next 30 burpees. By now my back is screaming and tail bone are screaming but I can hear my team mates yelling my name so I make the final baby crawl to the slippery incline wall, nail it in about 5 steps and run for the fire. Hand in hand with my husband, we make the final leap over the signature fire, but my legs don’t really want to move so I land awkwardly onto my right heel. I straighten up and limp to the barbarians with fire in my eyes, ready to take on any blow they could give me but they relented. I am guessing I looked pretty pathetic since not one of them touched me. I limped my way to the volunteer handing out medals and he complimented me for continuing to smile. So I grabbed my medal and banana and limped off to the hosing area. I now sit and reflect on how I almost made it through 4 hours of awesomeness without an injury and if it wasn’t for that damn slide, I would be pain free today and would not be wincing every time I have to sit or walk but that cannot be changed. And as long as this does not hinder my Beast performance, it’s just another race in the books and just the confidence booster I needed to take on Mt Killington. AROO!!!

* Event Details
We intially parked far away  because the address on the volunteer parking pass was wrong. However, the next day we parked right across from the race. There were ample restrooms, the venue was great, and the reg area was set up well.

* Race Details
This race sucked in the best possible way. Every hill crested gave way to another hill, and another, and another. The first mile of the course was up to the south summit of the mountain. In that first mile, there were a set over over-unders and then the Over-Under-Through. I had met a guy that was paced well with me and we stuck together or near each other for much of the race. There were the basics: spear throw, OUT, hoist, barbwire, and 7 and 8 foot walls.  They also threw in a swim out to a dock that you had to climb onto, and jump off and swim again. I enjoyed getting a poker chip for making the spear. Some guys were trying to get by the volunteer without a chip which made for interesting arguments. The tire flip was a nice touch. Miles 4-5 were mostly downhill and ruined my knees. Thankfully, Spartan put a nice sandbag carry at the bottom of the hill and then another mile long uphill from 5-6. At the top we had the 8 foot wall and after that I believe we had the inverted wall. This was my third race with an inverted wall. To me, this was very easy; however, my new friend cramped up and fell off. At that point he told me to enjoy the rest of my race. The barbed wire was next and after that we had the atlas carry….at least that’s how I remember it.  To be honest, the race tends to all melt together by the end! There was another downhill then a slight uphill to the water slide.  There was no cliff jump this year, which was one of the main reasons I wanted to do this race.  After the slide was another long steep downhill to the final five obstacles: rope climb, traverse wall, slippery wall, fire jump and gladiators.
This was by far my hardest race to date. In two weeks it will be my second hardest. I saw a lot of the Spahtens while I was working the finish line. Far too many of you lost your timing chips! Seriously, one of these days they are actually going to bill you. I had a terrible, awesome time, and I will certainly be back next year.

* Event Details
This race was held in Vernon, NJ at a ski hill.  Who knew you can ski in NJ?  Although it was more than a little off the beaten path, it was a very nice venue for a race.  The festival area was pretty much what you’d expect from Spartan Race.  The only issue I had was with baggage check.  When I checked my bag, the guy told me to remember that it was on the last shelf to the right.  When I arrived hours later to claim it, I was told that all of the bags had been moved and everyone was just being brought in to find their own bags in the disorganized piles.  Otherwise, everything was just fine.

* Race Details
Although I didn’t get to race in NJ in 2012, it was billed as just about the hardest Super that Spartan Race had ever built.  Plus, there was a cliff jump.  I had spent a year getting excited for a challenging day and psyching myself up to jump off a huge cliff.  Boy, was I disappointed!
The race was brought back down to a respectable 8 miles, which is really fine as long as it’s packed with obstacles.  This is where Spartan Race failed for me.  I am a runner.  I have been a runner since I was 3 years old.  I love to run trails.  However, I can run roads and trails anywhere.  I can only do most of these obstacles when I’m at an OCR, so I like to see a lot of them.  I also like a little variety, but I’d settle for the same old obstacles as long as I get to play on them.  For me to say that there was a lot of running in this race would be an understatement.  There was one point where we ran on roads and trails for at least 1.5 miles without seeing a single obstacle!
Were the hills insane?  Yes.  Could they be considered an obstacle?  Sure.  But I want some man made ones, too.  The obstacles that were there weren’t as gnarly as I’d expect for a Super, either.  Some were standard, like the walls, the atlas carry, and the rope climb.  Others seemed a bit dumbed down.  The sandbag carry was (I believe) the shortest one I’ve seen at a Spartan Race.  The women’s weight for the Hercules Hoist is just too light.  I was challenged to pull two at a time and the biggest difficulty with it was handling two ropes with my tiny hands — I am confident that I could have lifted 3 without trouble if I could have held 3 ropes.  The monkey bars and cargo net were missing.  The slippery wall was dry.  The slip and slide wasn’t slippery (and, seriously Spartan Race, a slip and slide??).  And, to top it off, there was no cliff jump!!  That was a huge disappointment for me and for many other people.
To be fair, if this were any other race than a Spartan Race, I probably would have been fairly happy.  I just expect more from Spartan.
After being underwhelmed with both the NJ Super and the Amesbury Sprint, I sure hope Spartan Race steps it up a notch for the Beast!