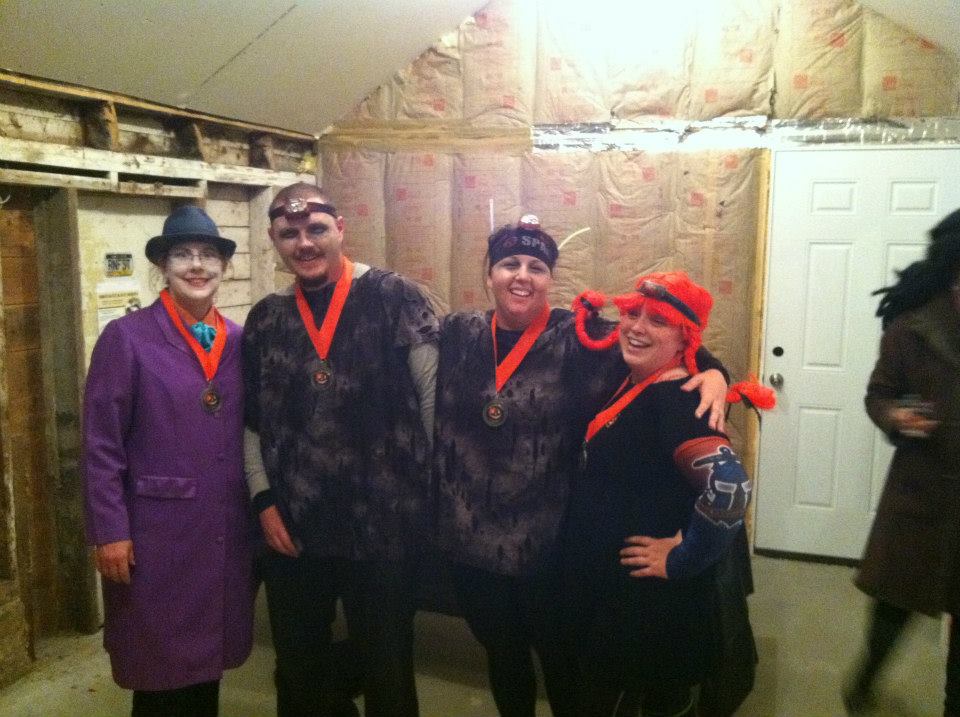 * Event Details
What an event!
Parking: Free! Short walk to registration and the start
Facilities: A fire, food, indoor & warm registration!
Vendors: Ice Bugs, wished I had the money to buy a pair… hopefully soon as they are awesome!
Schwag: Rockin’ awesome medal that spins and was special for the Halloween Race with space on the back for an iTab and Shale Hill T-shirt.

Everyone was encouraged to dress up and their was a costume contest which was so fun.
We were encouraged to bring a bag to pick up candy along the course which I forgot, will remember one next year as there was plenty of goodies to be had on the course.

* Race Details
This was my first experience with Rob’s crazy course. It was fantastic. There so many obstacles and ones I had never heard of or thought might make a good one. I definitely had more than my fair share of obstacles that I could not due but I was able to attempt every single one and I will consider that a success for the day.
We were able to skip out on the water and mud obstacles and with the wind and chill in the air, I was ever so grateful.
Our group decided that we wanted the extra 15 minutes of daylight so we headed out with the elites and missed the instructions that we could not do the carry on the sandbag/slosh pipe carry, so we did the carry. My first experience with slosh pipes and I most certainly need to make my own now. We made an executive decision to skip the log and bucket carry and found out after the fact that since we were not elite, we were in fact supposed to. I love it when things work out like that.
There was candy scattered throughout the course, which was awesome to collect and served as a fantastic pick me up mid course. Water stations were spaced well and just when I felt like I would need them.
They had the scare patrol in full force and during the daylight I was able to pick the majority of them out before they had the opportunity to scare me. Once the sun dipped down and I realized that my headlamp was not working I would not be so fortunate. I wish someone had a video camera. I took a running leap and landed on top of a set of hay bales. Just as I was transitioning my legs to slide down the backside, a masked man jumped up, reving a chainsaw. I screamed, proceeded to fall backwards, landing in a heap at the base of the bales. He got me good, I laid their laughing while I caught my breath. Everyone seemed pretty happy I went first. One more good scare and the rest of the course was pretty uneventful scare wise. The obstacles continued to take their physical toll as is to be expected.
This course was a real challenge. I have my work cut out for me and I like it. I will be back and I can’t wait to see the changes in both the course and my abilities.
Awesome awesome awesome!

* Event Details
I’ve now run several events at Shale Hill as well as a weekend long training session. And, even after being on the same course so many times, I am nowhere near getting tired of the place! Rob Butler always has a few surprises up his sleeve any time we’re there. The Halloween run on Saturday (Oct 26, 2013) night was no different.

Parking is on site and free. With this race not starting until 4:00pm though, I had to use a flashlight to find my car to go home! Rob had everyone set up inside his barn/gym and it was toasty warm in there for us before the start and after the finish as well as for all the spectators to have a comfortable place to hang out inside. There were plenty of tables for the food afterwards and still some room for the kids to run around and some minor playing for those who wanted to show off their monkey bar skills.

The medal was specific just for this race and spins just like his others do. I’ll post a picture with the photo album from the race. There was also a pot luck meal and dessert provided by some of the local folks who came out. It was a great spread with pastas, salad, breads, soups, and many cupcakes, cookies, brownies, and pumpkin pie for dessert.

* Race Details
The race was set up to be run with two heats. At 4:00, all of the elite runners would start out as a group. Then, at 4:15, everyone else would head out. Unfortunately, we all goofed up Rob’s plans. I know that the Spahten group determined that the extra 15 minutes of daylight would be helpful and we knew we wouldn’t be in the way of all the elites, so we just went at 4:00 with them. Apparently, we were not the only ones. After the 4:00 heat took off, Rob turned around and there were only 3 people still there! This normally would not have been a problem, except Rob had it all planned out to differentiate between the two groups and was intending to let the 4:15 group know that they had to do the sandbag loop, but didn’t have to carry a sandbag or a slosh pipe. We were also supposed to completely skip the log carry and the bucket carry and possibly a couple other minor changes. Of course, we never got those instructions, so we paid the price for jumping heats. Honestly though, w
hereas our group did carry the sandbags/slosh pipes, we made an executive decision to skip the two carries anyway, so we got off pretty easy.

A quick side note about the sandbags/slosh pipes. We knew from a summer event that Rob was planning to replace the messy, difficult to maintain sandbags with slosh pipes. This is a great move! For this race, he had both options available. On top of that, the slosh pipes were built out of two different diameters of pipes. It is evidence of the scaling options that are going to become available to runners who aren’t ready for the full Rob Butler pounding. Personally, I think scaled options are going to make a world of difference because there are many runners who are very intimidated by Rob’s course and this will make it possible for them to be included rather than just be relegated to the sidelines as a spectator.

The course had some minor changes from the last time I ran it, but was mostly the same. It was nice to skip the water and deep mud obstacles and I didn’t feel deprived at all. It was really great to do the slippery/slant wall without having just crawled through a mud pit! We were still tired by that point, but at least we weren’t caked in mud and our hands were not slick. The same went for the fireman’s pole to climb up. Usually, I cannot get off the ground. This time, I was able to get about 2/3 of the way up before needing an assist.

The difficulty level is still off the charts, but I had a chance to hear Rob explain some of his future plans and I am excited for them. His ultimate goal is still to have a full 6.2 (10k) course that is so difficult that very few athletes can accomplish it without specific training. But, he also wants to make the course accessible to those who are not capable of doing everything by having some scaled options both in length of the course and in difficulty of some of the obstacles. The previously mentioned slosh pipes are just a first step towards that goal. Personally, I feel this is going to open him up to a wider audience and ultimately make him more successful. He’ll have the top athletes who will want to come just to see if they can do it and have the normal weekend warriors too. They say you can’t please everybody, but I sure think he’s going to try!

Since this was a Halloween race, there was candy randomly spread out on the course for runners to find and collect. I completely forgot about the “bring a bag” instruction, so pockets made do for me and, since it was a costume race, I actually had pockets to use! I thought the candy was a nice addition and a mini Butterfinger sure hit the spot at about the halfway point. In addition, Rob had PLENTY of volunteers on the course to scare runners. We started during daylight, so we were able to get into the spirit gradually. Many of the first scarers were easy to spot and so I was good for the first half. For the second half, after dark, our group was mostly led by Hannah Hawley who got the brunt of the spooks. The two best were someone hiding under a small bridge and reaching up between the boards to grab us as we walked over and a guy with a chainsaw hiding behind a hay bale. His timing was perfect as he jumped out and revved the engine just as Hannah got to the top of the bale.
It startled her so badly that she fell backwards off the hay bale and just laid there laughing as she tried to catch her breath. All I can say is that I’m glad it wasn’t me!

The combination of the dark, the candy, and the volunteers to scare us made a fantastic course even better. Huge kudos to Rob and his team for making a truly excellent event.