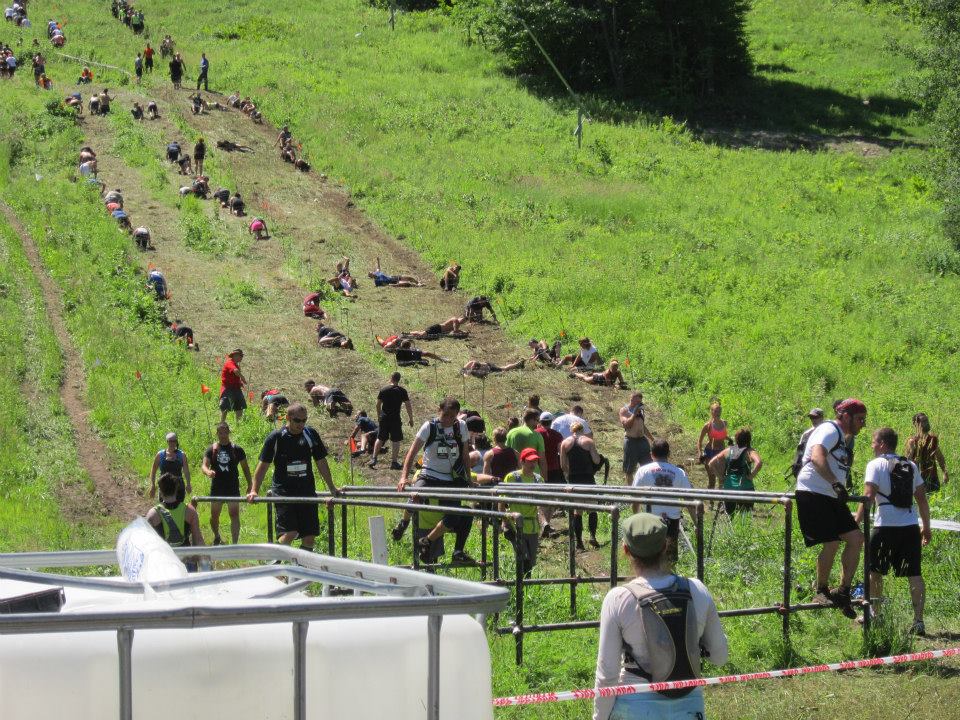 * Event Details
This was only my third Spartan and first review so bear with me as I try to remember as much as possible and I will make some comparisons based on the Montreal Super.

The Ottawa Beast was actually held about 1hour north of Ottawa, Ontario at Mont Ste. Marie ski slope in Quebec. When doing research for places to stay there did not appear to be anything in the immediate area, even for camping, but the drive up from Ottawa was not too bad. The signs directing us to the venue were very well positioned and all turns were posted starting with the first turn off from Rt 105.

Although there were a good number of vehicles already there we lucked out with parking and were literally less than 100 yards from the venue and parking was only $5.  Registration was inside the ski lodge with at least a half dozen stations available.  At the time I went through there was no waiting and they even asked to bump up my starting heat which I was very willing to do.

There were about a dozen portapotties on site and wait times were generally less than five minutes.  According to my wife by mid-afternoon they were trashed however.  Vendors were non-existant aside from the Spartan merchandise.  Wheetabix was present but long gone by the time I finished.  Apparently there was beer available along with grilled hamburgers and hotdogs.  The event shirt is probably my favorite of any race I have done (it’s a toss-up between this and Fenway ’12). It is black athletic style with the traditional Spartan Race logo across the chest, Spartan Beast down the right side and green Beast claw marks on the left shoulder.

* Race Details
After doing the Montreal Sprint I figured that at 5-10km more the Ottawa Beast could not be much worse but it definitely was more intense than I was expecting. According to the GPS tracking of another competitor the final distance was 23.5km(14.6mi) and the total elevation gain was 4400 ft spread out over four trips up the mountain. There was a good deal of steep terrain on the mountain.  Some uphills required use of hands to make your way up the slope and there were some downhills that were slower going than uphill to avoid losing your footing.

Overall it was definitely a challenge but completely doable as long as you are in somewhat decent shape and had the determination to finish.