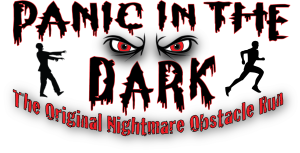 * Event Details
Parking was free, surrounding the building that we waited for our heats in and was the festival area. A few venders but i was more focused on hanging with the team. Cool medals, awesome finishers shirt for the team with the logo on the back

* Race Details
Zombie attack idea was cool, the stories from last year made it sound like the back story was more intense, but i loved the idea, “killing” somebody to start the race is awesome, they suffered from a cold and rainy night so the zombies were dropping. But they still had awesome ones on course, skme in predictable spots and some hidden well, 2 of them i did not see, so happy about that. The zombies i saw were pretty into it which is awesome! Running through the school was great the little girl zombie was awesome, i was grinning the whole race, i thouroghly enjoyed the atmosphere and the fit challenge finish line about half way through was pretty cool too. Kverall i will do it again and look foreward to blizzard blast!

* Event Details
parking for us was easy we got there early and got street parking for $2.00 right outside the front door.the location for the pre/post race party was inside a auditorium so we were able to stay warm and dry before hand.race schwag was a nice medal and a special event shirt for the team.

* Race Details
the overall race was great and a lot of fun. started with a few min bus ride to the start location and then a lil theatrics to get us going and then off on a nice dark rainy course with the only light coming from our lamps. the first half of the race has a lot of good up and down hill work made tricky by the wet course, the second half was almost all flat and for runners allowed them to open it up a bit. the obstacles are very fun and approachable a few 5 foot walls,tetertotter, a 8ft wall with several foot steps to get up and down on your own a few crawls under trucks, there version of a sandbag carry the pumpkin carry . the course was VERY well marked and we hit only one snag at the school after exiting the gym and going right there was some confusion as to where to go but a staff member popped up quick and directed us the right way. this is a very fun cant miss race and a nice change of pace doing a race in the dark. only complaint i have is that it is a untimmed event

*Race Details
Panic in the Dark takes good care of its racers. Free parking, excellent large indoor facility. Over the top love for the NE Spahtens with mammoth table of fresh fruit and our coveted Largest Team WITH our logo t-shirts. As a non-beer drinker, it’s nice to have a bar.

I love Panic in the Dark. I had concerns about their volunteers showing up this year because of bad weather. Those zombies that were brave enough to take on Mother Nature looked like death and were probably frozen to death 12 times over, but they rocked the course. Could there have been more? Oh yeah! The spot that most missed out on having a zombie was the area where we had to run by the metal fence in very tight quarters. All I kept thinking was, “so help me if a zombie reaches through there to scare me!!!” I wasn’t really sure if I would drop dead or take the arm and run. Major kudos to zombie girl who was hiding at the back of the bus waiting for her perfect opportunity to scare your breath right out of your soul. Yeah, -5 years of my life right there. Pretty sure she was laughing hysterically as I got off the bus. WELL DONE!!!

The school was a bit confusing. Maybe it was meant to be more like a maze this year with options, maybe we had last years fear expectations over-ruling sane thinking. Should we go into the red lights??? Or follow the yellow tape that is over there. Poltergeist taught us well, we took the yellow tape at the top of the stairs and found our way out. Most excellent “day care” set up. “Come play with us, come play with us!” Not cool little zombies, NOT COOL! I My niece and son were among the racers that got lost and were “detained” by a zombie who would only say, “Be patient.” in the most threatening zombie way possible.

The obstacles (walls, crawls, tennis court netted maze) were all relatively easy. I still have work to do on mastering taller walls. Especially ones where a zombie greats me on the other side nearly sending me flying back down in the fetal position! The tennis court netted maze was simple except for the multitude of zombies reaching through the netting and moaning for brains–all of which caused for elevated fear and floundering. In the land of webs some signs would have helped racers who chose to walk over the cargo net rather than crawl under them. About half of the spider webbing had been knocked down to the ground increasing the ease of getting through. I’m guessing that the hay bales were supposed to be covered with tarps to be a crawl, but that the rain and wind made it more of a hazard? Even running through it was a bit of a challenge as it was pretty slick. Speaking of slick, those teeter-totters were the most challenging obstacle of the night even with the grip tape. Slow & cautious was the way to go. Thanks for the fun finish of tubing. Maybe work on some type of arches that have stuff hanging down or flashing lights to make it more dramatic for next year.

I try to convince people to do this every year. It is such a fun way to spend the night no matter what the insane weather may be! This race is easily run/walked/crawled by beginners and worth every penny. Rated Excellent and definitely returning in 2015.