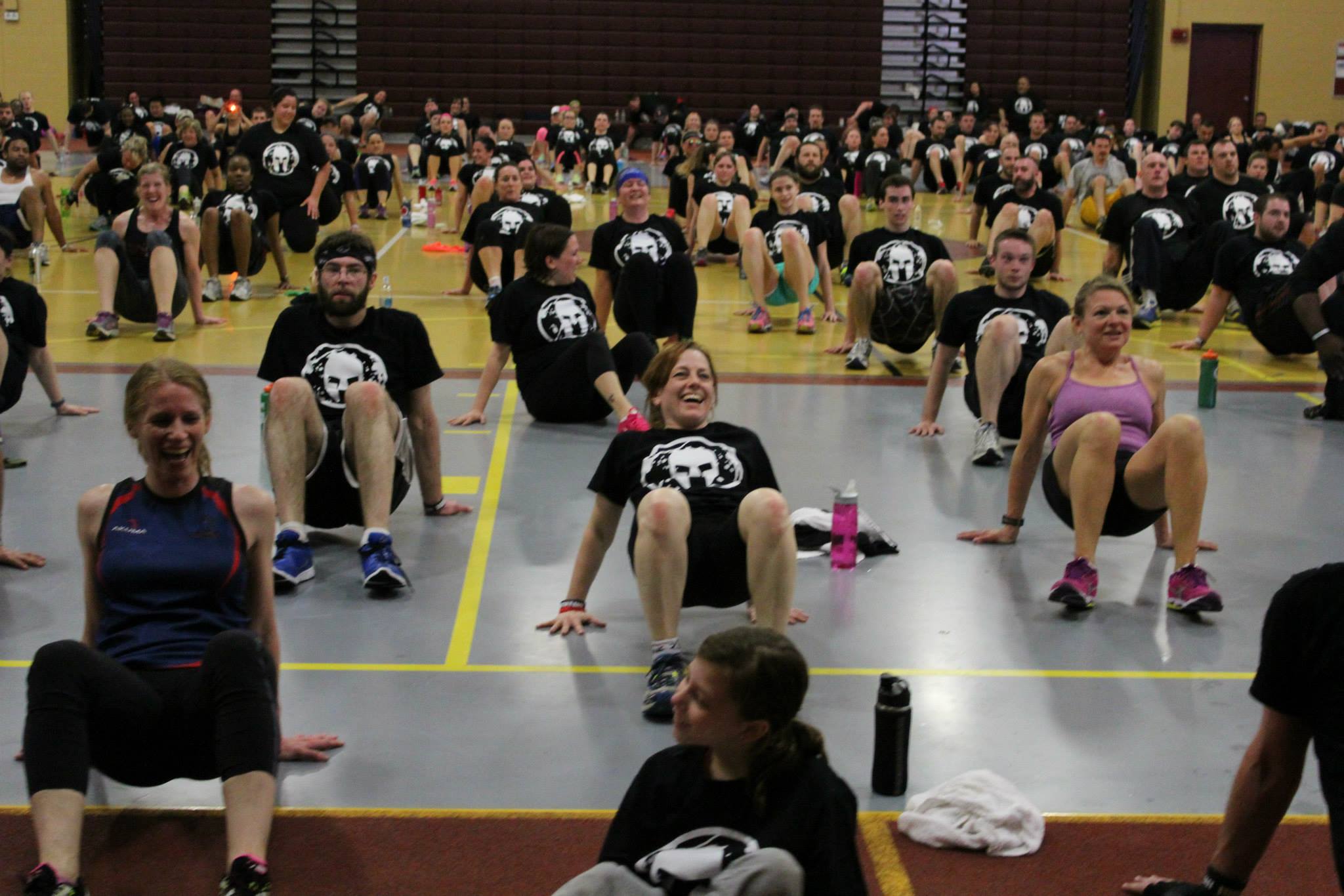 Event Details
The Workout was held on Randall’s Island, Field 90. There was generally no parking because the workout was held on an artificial turf field next to the Robert F. Kennedy (Triboro) Bridge. People parked anywhere they could, however many people did take public transportation.

There were no vendors. When entering there was only one tent, the Sign-Up Tent. The sign-up process was very simple. You gave in your form and they wrote a number on your hand and gave you a Training T-Shirt.

SInce people were late, it was announced extra burps would occur.

Race Details
Before you think this was an event or a race, it was a training session. It was not training with obstacles, ropes, sand bags or anything else. This was not the people from Spartan Race teaching you to go over walls, climb ropes or throw a spear. It was a training session or you vs. yourself. I do not know what it was like at any other workout, I can only speak about what happened today. When it started, it was led by Don (and I am sorry I can not remember his last name). He remembered meeting me at Citifield last year and was surprised that I came “all the way down to New York for the workout”. He then learned I was from New York.

When the workout started, they lined us up in lines of 50. I am assuming by the turnout that there was between 450 and 500 people there. Don introduced himself and explained the purpose of today is to test yourself, push yourself and show that the human body is a fantastic machine. The point of today was to show you how to push your machine and make sure that your body and mind stayed connected.

The exercises were in groups, always getting harder and harder. It started with running in place running at 50% and increasing and decreasing 10% at a time, until you were eventually at 100% speed as if “you were being chased by a wild boar”. Thrown in there were high knees, jumping jacks and of course, burpees. As you did exercises, Don kept telling you things like “when your mind wants to quit, your body has only spent 10% of itself” and other things to keep your mind engaged. The next exercise, it proved true.

They had us all cross our arms over our chart and lean back three inches. Then at the same time, lift our feet one inch off the ground. Holding it was difficult, especially for those (like me) without strong cores. Then, we had to do the same and count out loud for 30 seconds. Counting and having an established goal made the exercise easier and showed us that the mind can work with the body for a goal.

Ever do wrestling burpees? Well, after Don explained then we did 30. Counting off, you can hear people finish while others were at ten. They guy next to me finished before I did and then actually did the last five with me to push me. True Spartan. Mountain climbers. Bear Crawls. Reverse crab and Table were all done. The exercises never stopped for two hours. And, when you were at rest, you had to be in Plank Position. Some rest.

Some things I noticed about the event. First, the only people I saw wearing the Spartan shoes were those that worked for The Spartan Race. People were wearing all types of sneakers, from regular Converse to All-Terrain shoes. I heard some people talking about Trifectas and Beast races. I heard others saying that they had no OCR experience at all. I was alone so I was talking to people the whole time. There was a wide variety of ages there and looking around, I was able to determine who was there to test themselves and who did not know what to expect.

In the end, it was a lot of fun. I had a good time and I pushed myself. There were some sound issues as Don was using a megaphone and since we were next to a highway, we could not always hear him. However, if that was the worst of it, it was a great event that was FREE. I would not hesitate to tell you to go, but leave your mind 100% open for anything. Just because my workout was one day, i cannot guarantee all are the same.

I would do it all again tomorrow.

* Event Details
parking was plentiful being that it was a early saturday morning and the school grounds had plenty of stops for everyone. no vendors since this was a spartan 300 workout and the only schwag to be had was the unbreakable wristband and the black ” im training for a spartan race” shirt everyone gets for showing up

* Race Details
the workout was lead by the one and only Don Devaney and with help from a bunch of the local SGX coaches pitching in to help out also. this was a 2 hr workout with a mix of a lot of different cardio and body weight movments and did a amazing job and bringing up your heart rate and keeping it up there for a bit then bringing you down and then back up again just like a race will do to you. there was a lot of jogging in place with intensity going up and down, jumping jacks, push ups and everyones favorite THE BURPEE and they also had us do some of the modified burpee known as The wrestler, just when you thought burpees couldn’t be made more evil they proved us wrong 🙂 . the wrestler is completed by getting into the top plank position before the push up then kick out your left leg across your right leg while rasing your right arm and turning till you are in almost a side plank then repeting the motion on the other side then the push up, spring up and jump. there was also a lil r
un around the campus before getting back and more work. towards the end Don just put us beyond full throttle and would keep calling out a new exercise and rep count before people finished the previous workout and just became increasingly faster and you just had to push to keep up as best as you can. the workout winded down with core work of sitting with your knees bent and a few inches backwards of the top motion of a sit up and then various holding the legs off the ground and motions. not only did Don and the crew help work our bodies but they helped work and open your minds a bit and giving inspiring words and letting you know you can be as amazing as you want to be and your the only one who limits and holds yourself back. it was also great to hear him during the class when we were doing the bear crawl stance with knes off the ground that he kept reminding people this is YOUR workout to do as you can with it and not to pay attention to the person to your left or right and
what there doing because this is for YOU and if you can only do one second of that moment thats fine because your doing the best that you can and be proud of that accomplishment. that to me is also a reminder of something i have heard a lot from our team is ” Run your race not someone else ” and as long as you know you gave it 110% and you left everything out there and gave it your all you have won your battle. i consider this event a MUST attend when it comes to your area it will do you wonders