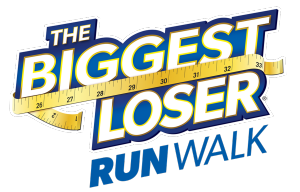 Parking was at the bottom of the hill and while there were shuttles for bringing people up to the registration area, it seemed most people opted for hiking up on foot. and Given the cold of the morning, the climb was a good way to warm up.

Post race the hose-off area was nice, plenty of pressure in the water so rinsing off was easy. There were also heated changing tents which was a treat.

Biggest loser gave each runner a nice tech shirt for the race, as well as a nice small bag for carrying stuff (not during the race). At the end there was a unique medal, as well as the standard (more on this later)

Bathroom availability at the venue was good. The main building had the real bathrooms open, and I never saw a line. There was also a flock of porta-potties near the BL tent and an occasional one on the course itself.

The BL race is also run with a celebrity from the show, ours was Matt Hooper. He is a good guy and was confident and motivating to the runners. He was able to put some people at ease, which was good as a fair number of people were doing their first OCR, and I think all of us were on our first Spartan course.

The BL also had several volunteers to run with us. They were all excellent and helpful and motivating. Having some more seasoned runners to go with the group of relative newbies was a good plan.

* Race Details
We learned at the tent before the race started that we would be running the complete Sprint course. No shortcuts. Most of the BL races have shortcuts, but not at Killington. We were also informed that if we wanted to we could skip any obstacle, or we could opt out of the penalties if we failed. The group talked it over and we decided that since we were at Killington, and we were running the complete sprint course anyway, we would also do all the obstacles and burpees as well. We also agreed that teammates could help out with the burpees if desired.

The course started with a very short downhill, and a couple quick turns before it started a climb. And it was one hell of a climb. The trail just kept going up, some sections steeper then others. Some muddier, some more slippery. All hikable. As we climbed to the top there were a few obstacles. Some short walls, over-unders and such. It was surprising how much harder it was to get over a short wall after a long slog up a mountain though. And of course, what comes up must come down. Before coming to this mountain a runner should definitely work on their hills… a lot. Then work on them some more. Then put on a weight vest and do it some more. And when your done, run some hills…. then repeat all of the above.

There were also a couple single-track type runs through the woods. I thought these were a lot of fun. I heard some grumbling from some other racers, but I didn’t see any problems. When I needed to pass, I just told them what side I was one and they let me by. When people needed to pass me, I stepped aside and let them through. I didn’t see any problems here. Although there were two broken foot bridges in the woods, but I just thought of them as free additional obstacles.

Nobody failed the bucket carry. Most people made the traverse. Everyone failed the rope climb, and 1 person made the spear throw. A lot of burpees happened all at once, and we shared some of them to help each other out. ( to be clear… if 5 out of ten people failed, 150 burpees still happened, but it might have only been 15 for each person) By now the team had cemented under fire into a solid entity.

I thought the barbed wire crawl was ridiculous and there was a lot of complaining while we were getting through. But once we got through the complaints ended. I think the entire group did the crawl, but I wasn’t watching everyone as well anymore as I was getting tired.

The pipe traverse after the barbed wire was another 100% failure rate for the group. Both this one and the monkey bars required hand strength that none of us had.

At the finish, since we had done the complete sprint course, and done all of our burpees

While I am a newbie, and this was just my 3rd OCR I will say this. It was by far the hardest I’ve done. But it was also the most satisfying. I have 363 days remaining to get ready for next years Beast. I will be back.