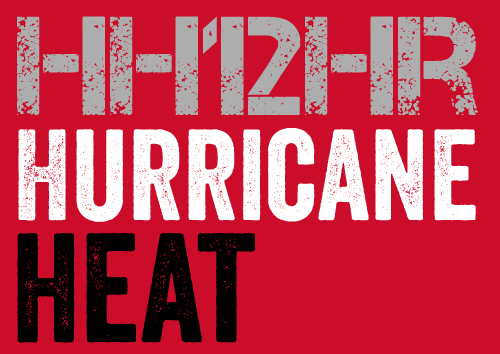 * Event Details
• 12-Hour Hurricane Heat 004 was held on Sunday during the Tri-State Spartan Super at Mountain Creek Water Park in Vernon, NJ. We met at 6:15 AM in the parking lot across the street from the venue. Of the 22 who began, all were men except for one. About a third of those who registered didn’t show.

• A required gear list was sent out about a week before the event. Rucks had to weigh 30 lbs. (excluding water) for guys; 20 lbs. for the ladies. There was a gear and weight check and a short warm-up. At 7:00 AM, we moved out and began for real.

• In case anyone wasn’t sure what they were in for, we opened with 300 burpees for time. Boom.

• Over the next 3+ hours, we wore a heavy path from the base of the mountain to the summit and back down again. With rucks, without rucks, trying but not being allowed to carry teammates’ rucks.

• At some point between climbs, to learn lessons about listening and attention to detail, we did some PT. Moving to the next position without a specific instruction from our leader reset the count to zero. Which happened a lot.

• Unfortunately, there was one major incident: during one of our descents, the two HH leaders flipped the ATV they were driving. Tony broke his nose; John sustained a major cut above an eye. The team called for medics; staff appeared on scene very quickly. As ugly as it was, it could have been seriously worse. How and if this impacted the programming, I have no idea. The show went on.

• No longer competing as a team, we then ran the full regular Super Spartan course from start to finish. We actually just missed the 10:45 AM team heat, taking off at 11:00.

• The twist was that as Hurricane Heaters, we had to wear our full rucks the entire time, including while on obstacles. So yes that meant weighted monkey bars, rope climbs, etc. Obstacles that I normally breeze through became a lot harder. Fortunately, the many burpees were unweighted.

• The only other modifications were that we all burpeed out of both the swim (no drowning allowed) and the barbed-wire crawl (time).

• A hatchet attached to your pack makes for a great conversation starter with random racers.

• To move on to the final stage, you had to meet an unspecified time hack in phase II. I picked up my Super medal, and immediately got the (unsurprising) bad news that I had been too slow. My day was done. As much as I was hurting at the time, it still sucked. And as we finished at different times, I also sort of felt left hanging as there were teammates I wanted to talk to afterwards, but didn’t get to see.

• Anyone who didn’t finish the course quickly enough had the option of buying back in with a mere 500 burpees, and then rejoining the team. Two did just that. These ‘unofficial’ finishers earned some but not all of the HH finisher swag.

• One kickass Spahten did in fact finish in time and conquered the HH12HR! See his review for more.

If You Want In:

• Sign up and do it. Besides the harder-than-normal physical challenge, Hurricane Heats are a great way to meet awesome people. I’ve intentionally left out some details so there’s still some mystery to experience in person. If you’ve done a few Spartan Races and are looking for a new challenge, this fits the bill.

• Train hard. Rucking up and down a mountain for 8+ hours at minimum is no joke. And you’ll need to be a rock star to make the required time.

• Think about your primary goal for the day. Specifically, whether you’re going to go all out to be an official finisher or if you want to maximize your time with your team. This class had pairs / individuals that pushed as hard as they could; another subset of 8 or 10 decided they wanted to finish the course together regardless of the outcome. With a small number of participants, it may be harder to find others that run at your pace.

• Go the distance. 48 hours removed, not taking the penalty and continuing on was the wrong choice.

* Event Details
• We had to meet in the parking lot by 6:15 am across the street from the race site. There were 22 people who arrived for the challenge. There were 7 people who did not show up.
• At 6:30 am, we did warm up exercises in the parking lot consisting of plank, pushups, etc.
• A check was made to make sure our packs weighted at least 30 pounds. It was necessary we weigh down our packs with something additional than the many items we were told to bring with us.
• We did some introductions and there was a lot of speculation as to what the day would have in store for us.

• At 7:00 am, we went across the street in front of the rope climb and were instructed to do 300 burpees without our packs on. Half-way through, we were told to run to the tractor pull and complete that obstacle, run back and finish doing the burpees
• When we done, we were told to get in the water and do the rope climb without our packs on
• We then headed toward the start area and did pushups. This was a listening exercise and since we could not get ourselves in sync as asked, we had to keep starting over until we got it right
• Next, we were told to get to the log carry obstacle wearing our backpacks within 35 minutes. This was at the top of the mountain.
• At the top of the mountain, we had to move a log that was several hundred pounds and about 15 feet long from the log pile it was in and place it on the ground about the equivalent of about 100 feet away. This required first getting the log out of the pile and then coordinating how we would lift it up and move it. Very heavy and awkward.
• After that log was moved, we went back to the log pile and got another log. A little lighter than the first log but still very heavy and equally as long. That log had to be carried to the bottom of the mountain and placed it in front of the stage. After we got the log to the bottom, half of us laid on our backs under the log and raised it above our heads while doing flutter kicks. The others did squats. After a couple of minutes, we switched.
• Around 11:00, we were told to put our reflective vests on that we had packed. We would be doing the Super with our backpacks on. We had to finish by a certain time in order to be able to continue but were not told what that time was. We had to do all the obstacles with the exception of the barb wire crawl and water crossing. For those obstacles, we did 30 burpees. Any obstacle we could not complete, another 30 burpees. We made our way to the start line and left as a heat was being released.
• Those who finished before the cutoff were allowed to rest until the cutoff was reached, which was about 3 ½ hours. There were 11 who met the cutoff. Three others who narrowly missed it were given the opportunity to continue as unofficial but would need to complete 500 burpees. They all did it.
• The rest of the day was largely spent doing PT exercises, completing many challenges and following instructions.
• As the sun started to set, we grouped together and sat on the ground. We were done! We introduced ourselves to each other (where we live, work), explained why we signed up for this challenge, what we got out of it. We then got our t-shirts, medal and patches.
• It was an amazing experience and I would definitely do it again. Some of the details have been left out to leave a little mystery to the event. I did the 3 Hour Hurricane Heat in Amesbury, MA and liked that one too. You meet some great people who are there to also push themselves.