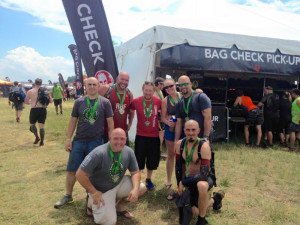 The tour of the country for a 6-Fecta continued this weekend in Cumberland, Ohio, at The Wilds, site of the 2014 Trifecta-In-A-Day. If you’ve never driven through NY, NJ, PA, WV and OH as part of a trip, and have friends, this is a great reason to go. But plan accordingly. GPS time says roughly 11 hours. That doesn’t include food and bathroom and stretch breaks.

Getting There/Parking:
The Wilds is in the middle of Cumberland, OH, about a 90 minute ride from Columbus, or for us, a 15 minute ride from our hotel in Cambridge. The road in for us was very twisty, and Saturday morning was extremely foggy which made some of the driving treacherous when you haven’t been there before. We pulled up to the venue, and were directed into two lines for parking. The lines came in from 3 directions off the road. We paid our $10 parking fee (I understand that the venue operates parking, but discounts should be included in 2016 for Season Passholders) to the friendly Wilds staff (one of which who was wearing a Callahan Auto Parts T-shirt) and were directed to a 4 Wheel Drive lot “in the event it rains you’re going to need it”. We had to use that same lot on Sunday, even after finding out that our rental didn’t actually have 4WD. The parking lot was probably just as treacherous as the course, as there were gopher holes EVERYWHERE in the lot. Step incorrectly – rolled ankle. Even the “driven paths” to the event area was filled with holes. Makes walking back to the car nursing a leg injury after the race about 100x more “fun”. Grade (given the circumstances) B

Registration:
Always done by Bib numbers, we had our Waivers printed out in advance. Knowing that I have multiple SR’s to complete this year, makes it easier to just print a stack of 20 copies of each one, for easier times at each race. However, it seems to be a system that they can’t figure out. Out of the 16 or so “lines” (2 per tent), it seemed that every 3rd line was at least 15-20 deep, while the other two were dormant. I understand that certain lines are heavily populated sections of the alphabet, but there has to be an easier way. Regardless, I waited in line in excess of 5 minutes to get my racer packet. This racer packet included the Yellow timing chip/wristband, a white Spartan wristband (which is supposed to show venue staff you have access to return to the venue upon exiting), the new Beer wristband (old coupons are still being accepted, fear not), headband and the “bib” which is now the racer packet itself. Really crappy for those of us with Bib collections as they’ve CONTINUED to put the adhesive sticker with Racer ID information on the front side of the bib. Grade: B (This will get lower if lines continue I’m sure)

Vendor/Festival Area:
While I didn’t get much time to check out the Festival Area, the kids course was not really spectator friendly, as you had to cross under the A-Frame Cargo Net to get there, and most of the obstacles appeared hidden. The only way you knew it was a kids course was the patented Orange tape markings. Vendors were scarce, specifically for food selections. There was a Grilled Cheese truck that seemed to be a hit with everyone on Saturday. There was also an adjacent truck to them, I think it was a more vegetarian friendly truck. There was no grill option or anything like that, but it’s understandable since they had to park food trucks on uneven ground in the middle of fields. There was Shock Top trailer in the middle of the festival Area as well as a Shock Top tap truck parked next to the other vendor trucks. The backside of the festival area had the biggest team tent (which was NOT for the Corn Fed Spartans) which overlooked the Cargo Bridge, Rope Climb, Barbed Wire Crawl, Dunk Wall, Slip Wall and Fire Jump/Finish Area. Pretty nice setup it’d be cool if NES got that same tent area for an upcoming SR. Grade: A (Can’t really discredit the grade due to vendors, but the Team Tent location was exactly where a Team Tent should be – ability to cheer on ALL participants)

Obstacles/Course:
Standard Spartan Obstacles were: 4’ Walls, Bucket Brigade (this was awesome if you’re from New England and only done SR’s where the Bucket Carry was the worst thing ever), Sandbag Carry, Vertical Cargo net (suspended between two trees), A-Frame Cargo, 7-8-9 Foot walls, Spear Throw, Rope climb (one side of the rig had knotted ropes, the other side had white nylon unknotted similar to ASP 2014), Z-Wall, Atlas Carry, Monkey Bars, Inverted Wall, Slip Wall, Dunk Wall, Barbed Wire (Dry on Saturday, Muddy on Sunday), Rope Swing/Tarzan Swing (they added a third step so that you’re not feet-dragging through the water), O-U-T, Herc Hoist (which has been the heaviest one since Mohegan). The Multi-Rig made an appearance again with the pipe to 4 tarzan ropes to pipe. They also brought Stairway to Sparta, which was the 6’ plywood wall into an A-Frame platform staircase. They used Hay Bales after a water station as an obstacle before heading into the woods, and also had a hillier section with ropes staked into the ground in the event you needed them for assistance. According to spectators there on Saturday, most people weren’t using them, and even after it had rained Sunday, most people weren’t using them for the Sprint, either. There were 5 water stops on the course, which was perfect considering the temps on Saturday were in the mid to upper 80’s and most of the course was sunny so people were dehydrated. ALWAYS REMEMBER TO CARRY WATER ON A BEAST COURSE. Unless you’ve trained otherwise. So many people hurting after only 3 miles.

As far as terrain goes, it was “hilly” compared to what we’re used to as mountainous. Yes there were some decent hill climbs, but nothing that can’t be duplicated anywhere else. It was QUITE enjoyable to do a Beast that wasn’t on a ski mountain, and definitely allows one to appreciate what we have here in New England. But the majority of the course was short incline/declines and flat lands. Grade (given the terrain) –B+

Overall Grade: B+/A- The weather couldn’t have been better, even if it did rain on Sunday AM during the start of the Women’s Elite Sprint. It was still above 65 degrees, and people were huddled up like there was 2 feet of snow on the ground. Would I run The Wilds again? Absolutely. I blew my knee out after the Z wall at Mile 5 on Saturday and limped across the finish line Saturday, and brisk-walked the Sprint course on Sunday. Sometimes, you can’t keep a good Spartan down.