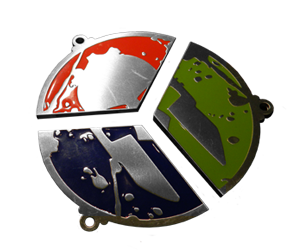 * Event Details
The address posted was not where parking was. There was very limited, if any, signage to direct people where to go. There was a man at the parking lot (at the address that was given) who directed us in the general direction to go, and then we followed cars to the parking lot. There was quite a bit of traffic as we approached the parking lot. With only a single lane initially going into the lot. The lot was very muddy and several cars seemed to have difficulty getting up the hills/navigating the lot. On the plus side, the parking lot was right at the venue and no need to take a shuttle! It cost $10 as always.
The registration was a bit unorganized, there was a chunk of numbers “missing” and we were told to go to the first line, where we waited in line with many others who were told the same, only to be led to the day of registration to be told to look up our beast number and get that packet (then get the other packets at the drop box tent upon completion of the previous race). Makes sense, but wasn’t clearly stated and no one seemed to know what was going on. Held registration up for quite some time. Drop boxes/bag check cost $5..even for those doing the trifecta day. They did give a $5 off merchandise coupon for checking a bag. Drop box area was very small…difficult to maneuver, change, etc.
Schwag was the typical grey “finisher” shirt which we get at every other Spartan Race this year. They also gave the distance specific medal & pie piece (based on distance…indicated by green, blue and red wrist bands). Word is there were some issues with some of the pie pieces not fitting in as they should when put together. They did not have anything special for completing the trifecta in a day. Trifecta shirts had to be purchased this year. Merchandise was quite expensive.
I didn’t see what vendors were there, so cannot comment on that.
They ran out of bananas

* Race Details
The venue was super cool…it has been compared to Jurrasic Park (minus dinosaurs, but with some other sweet animals–zebras, giraffes, rhinos, etc). It is a 10,000+ acre conservation land in Cumberland, Ohio. The scenery was beautiful. It had rained several of the days leading up to the event which made for an extremely muddy course/trails. It added a whole new element to the race and cause a lot of ankle and knee sprains throughout the day. It was literally mud the entire way.
The beast was between 14-14.8 miles, super was roughly 11.5 miles and the sprint was 5-5.5 miles. The course was well marked and seemed accurate, though there were no beast markers between mile 7 and mile 13.
The obstacles were pretty standard (bucket brigade, and bag bag carry, rope climb, trenches, over under through walls, tractor pull, tire flip, log flip, log carry, herc hoist, traverse wall, inverted wall, spear throw–attached to a rope, cargo nets, 6′ & 8′ walls, tire drag, log hop, atlas carry, etc). There were some new to me obstacles including the gauntlet, gut crusher (3 horizontal logs at varying heights that you need to get over). Some obstacles felt unsafe…the log hop, for example, logs were very loose in the wet ground and were very slippery. There was no water, just hat under the rope climb. Atlas stones were immediately after the barbed wire crawl, we’re very difficult to pick up due to slick hands and stones being coated in mud. Speaking of barbed wire crawl…there wasn’t one on the sprint distance course. It was quite cold, between 40-45 degrees with heavy winds, rain and hail. This posed a big problem for many as there were several obstacles where you got
wet, leading to frost bite and hypothermia. I heard the medic tents ran out of warming blankets.
The terrain was great, not too hard but certainly not easy. There were some moderate hills, certainly not mountains though. Had the entire course not been muddy, it likely would have been much easier. People were slipping and sliding in the mud, tripping over roots, etc.
We finished the beast with plenty go time to spare. It was very, very cold and that’s most hindered us from going back out. We decided that we would do the super, taking our time, and not worry about the sprint. Had there been some extra/special schwag we likely would have continued on to the sprint (but we took our time and missed the cut off anyway). Doing the beast and the super totaled about 26 miles for the day. (Had they stuck with minimum/near minimum distances– we were over mileage for all 3 beast, super and sprint). The super was basically a mini beast at just under 12 miles in distance, I’m proud of what I accomplished and got my highest distance, on foot, in a single day. Trifecta earned, even if not all on the same day.
Would I go back? Definitely. There was a lot of potential for it to have been an exceptional race. Unfortunately, weather, distances, etc made it a difficult feat to accomplish the trifecta in a day (over 31 miles!) and only a small percentage finished what they set out to do this year.

I highly recommend Burr Oak Lodge in Glouster, OH to stay at if you do go out to Ohio for this race. It’s a great resort about 1hr from the venue. It is located in a state park, gorgeous scenery, restaurant on site, heated pool and great prices! We got a family suite with 2 rooms…one with a king size bed, full bathroom, tv, etc. The other had a twin over fill sized bunk bed, full bathroom, tv, fridge/freezer, microwave, etc.